I come from a big family. I mean like an Italian-mob-sized family. As a result, infertility is not something someone from my line is expected to deal with. So, when my husband and I began trying for another baby and not succeeding, we fell into that same faulty logic. We both come from big families; we should be super fertile, right? If you assume that to be the truth something had to be wrong with one of us. That mindset placed a lot of undue stress on us as a couple, but truth be told many couples find it more difficult to make more babies once they’ve had one and not just because there’s less sex going on. Why? 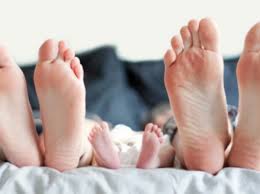 Let’s face it, it doesn’t matter if you’re the best parent in the whole wide universe, you have more stress than your pre-baby days. Stress has been shown to decrease fertility in both sexes, and not just the tear-your-hair-out, mental-breakdown stress either, in a 2010 study even low levels of stress reduced fertility in women by 12%.

Those that are stressed are also more likely to partake in the de-stressing wonders of alcohol and tobacco. Smoking in general has been shown to decrease sperm and egg counts as well as deter the mobility of sperm. While many would argue alcohol leads to pregnancy not hinders it, many studies have suggested the opposite. Even moderate alcohol consumption is suggested to decrease fertility by around 50%. It should be noted, however, these studies are not conclusive.

If there’s one thing parents often don’t get enough of, it’s sleep. Sadly, if you’re forgoing shut eye to do the deed in hopes of conceiving you may be left sleepless for some time. Lack of sleep in women has been shown to cause hormonal imbalance, namely in a few key hormones to the reproductive system. Not to mention lack of sleep leads to decreased ability to deal with stress, and additional stress due to mistakes and irritability, which creates a vicious two-step with reason one some parents have trouble conceiving more children. As an added ah-crap fact, caffeine, often the savoir of over-stressed, under-slept parents also hurts fertility.

Finally, whether you had a baby and still have the weight, gained sympathy weight, or simply just haven’t managed to slim down, excess body fat reduces fertility in both sexes by throwing off hormonal levels. On the other side of that Twinkie, too little body fat can have the same effect so those that work, work, work to get their pre-baby weight back are still hurting their fertility. In this same thought spiral, improper diet and nutrition can have a dramatic effect on your chances of conceiving. A simple daily multivitamin is one of the most overlooked natural methods to increase fertility.

Couple these three issues with a decrease in time and opportunity to have sex in the first place, and it’s not surprising many couples have more difficulty becoming pregnant again whether both participants are perfectly healthy or not.