4 weeks pregnant is an exciting time. Why? Well, because this is the first week you may technically be pregnant and even be able to confirm that pregnancy. If you are pregnant, your baby will reach its destination in your uterus sometime this week and set up shop. This process is called implantation.

How do you know if your baby has implanted?

You may not, some women have no implantation symptoms. Some signs that implantation may have occurred include:

-About a third of women experience implantation bleeding. This is often very light bleeding (possibly as little as 1 drop or faint pink on the toilet paper when you wipe) that occurs around 6 to 12 days after intercourse or ovulation. The timing can make it tricky to tell implantation bleeding from a period or pre-period spotting.

-Occasionally women report cramping or a “pinching” feeling in their uterus around implantation.

-Those who are charting their basal body temperature may also notice a sudden drop followed by a rise in temperature at implantation.

Ok, lets assume your baby implanted, congratulations! What happens next? 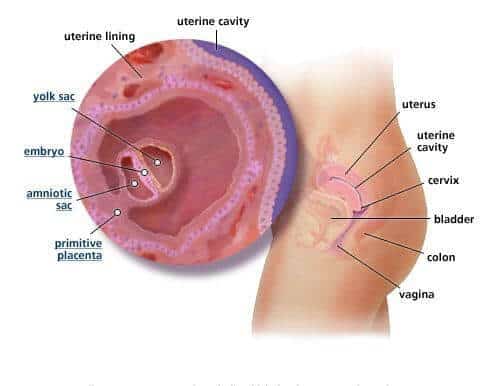 Your body immediately begins to produce the hormone hCG after your baby implants. This hormone tells the corpus luteum to keep making progesterone, so you don’t get your period. It’s also what will cause a pregnancy test to become positive in the coming days. The blastocyst (remember that’s what the fertilized egg is called once it implants) begins to split creating your baby from some cells and chorionic villi, or hair like projections that will later form your placenta. These projections help anchor your baby to your uterus. Fluid also begins to build, and a yolk-like sac begins to form. This yolk will nourish your baby until the placenta is complete. At the moment, this whole collection of cells is somewhere between the size of a pinhead and a poppy seed, but the speed at which your baby is going to grow from here on out is impressive.

Can you confirm your pregnancy at 4 weeks pregnant?

By the end of week four, hormone levels are most likely high enough to receive a definitive yes or no on an early result home pregnancy test, though waiting until week 5 can be a more sure-thing. Remember, that hCG levels at least double every 48 hours in a normal pregnancy, so waiting even one day later can make a huge difference between no line, a barely visible line, and an unquestionable yes. Be patient.