At 9 weeks pregnant, your baby is officially now a fetus rather than an embryo, but we prefer the word baby at any developmental stage. By the end of this week, all the major internal bits are also in place, but they do still have some finishing up to do. You, however, may feel a bit out of place. Mood swings are the most common pregnancy complaint this week. 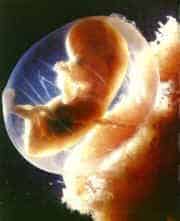 What’s going on with your baby at 9 weeks pregnant?

Besides the technical name change, your baby has also changed out the last bit of that embryonic tai

l for a more recognizably human face with distinct ears, nostrils, lips and even eye lids, though his/her eyes will remain fused shut for another roughly 18 weeks. His/her hands are less webbed and head is more proportionate to his/her body. The heart also now has four chambers, and can officially be heard on ultrasound rather than just seen.

It is, unfortunately, unlikely a hand-held Doppler will pick up your baby’s heart beat at 9 weeks, though not unheard of towards the end of the week with very sensitive models in thinner women. Regardless, it’s far more common for a Doppler to pick up a heartbeat around 12 weeks. Your baby is about the size of a grape or green olive measuring around .9 inches and weighing about .07 ounces.

What’s going on with your body at 9 weeks pregnant? 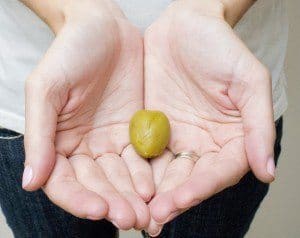 By 9 weeks pregnant, you can take whatever you typically experience while PMSing and just multiple that by well, about 9. Coincidentally, women who generally do not experience severe PMS also seem to experience milder pregnancy symptoms. One possible explanation for this is that both PMS and pregnancy symptoms are caused by hormonal changes. Some women may just react less severely to hormonal fluctuations.

As mentioned, one of the most common pregnancy symptoms at 9 weeks pregnant is mood swings. In addition to hormonal havoc, around 9 weeks seems to be that point where it really sinks in—I’m pregnant. This can add a whole new emotional component to already volatile moods. Of course, feeling like crap overall isn’t a huge help for most women either. On the upside, as the placenta finishes up this week, sometime in the next few weeks it will take over hormone production, and you should see an alleviation in symptoms across the board. In the meantime, it may help to take some “me time.” Not only does private relaxation give you time to work through your feelings, it also spares you the stress of accidental overreactions, random public sob fests, and other joys of severe mood swings. We’re certainly not saying you should lock yourself away from the world as a “public service,” simply to remember to make time for yourself.