Very little is worse than a stuffy-nosed, congested baby, except maybe a snot-dripping, gooey, rash-faced baby. Okay, so maybe they’re about equal in parenting pain in the butt level. Whether your baby is two days old or two years old and well into the toddler phase, he or she is bound to have boogers, and those boogers are bound to be different colors. This leaves many parents to ponder one more odd thought, what do different  baby booger colors mean?

Well, first, for trivia’s sake, what is a booger exactly?

Inside every nose, a substance called mucus is formed from water and mucin. This slimy stuff exists to catch contaminants as we breathe in air, preventing it from reaching the lungs. Usually, the tiny hairs within the nose move mucus down the throat, where it’s swallowed. Boogers form when mucus dries up or mixes with contaminants and then becomes stuck in the nose.

Mucus starts clear but can change color depending on what it has trapped. When we become ill, the body ups mucus production to help boot out whatever is making us sick, resulting in a snotty nose. Mucus production also goes into overdrive in the cold in an effort to keep the nasal passage warm, moist, and healthy. That’s why some babies get stuffy or runny noses even if they aren’t sick in the winter months. 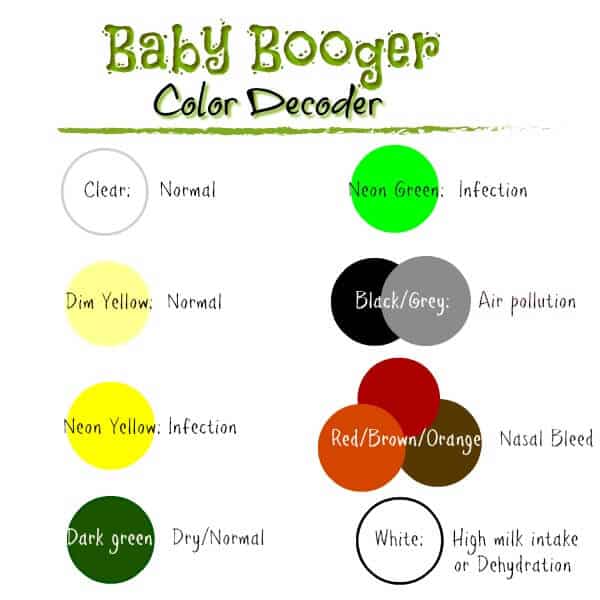 What color can baby boogers (mucus) be, and what do those colors mean?

As stated above, clear is the normal color of mucus. An excess amount of clear snot simply means your child is fighting off some sort of contamination. It could be allergies, a virus or bacteria, or even just a sign of a chill.

Sometimes dried or older mucus takes on a yellow tint. This isn’t usually a sign of anything at all and is generally pretty normal for boogers. You may try a humidifier to help keep your child’s nose moist for especially crusty critters.

Yellow, yellow, especially a shade which could be described as “neon,” is almost always a sign of infection, most notably viral sinus infections accompanied by sinus pressure and headaches. This color booger means your child is sick or soon to be sick, but doesn’t always indicate a serious condition. Watch for signs of serious illness. Infection can also sometimes be a sign of nasal obstruction.

Dried or clumpy green boogers are usually seen after a long day outside or someplace with heavy air contamination like a dusty room. Your child’s mucus is simply doing its job and catching all those bad things before they get to the lungs. Dried green boogers can be considered normal.

Runny green boogers or those of a bright shade, on the other hand, are usually a sign of a bacterial infection of some sort. Sometimes the tail end of sinus infection snot will turn a green color as well. Bright green boogers are another color that usually indicates current or near-future sickness.

Black or grey boogers are also caused by air pollution. In this case, ash, dust, or smoke are common culprits. For example, try checking your snot color after being around a campfire all day or in a smoky bar. Heavy dust can also cause black to grey mucus or small flying-bug particles.

If you’re finding red, orange, or brown snot coming from your baby or toddler’s nose, this is a sign of nasal passage bleeding. Closer to brown indicates an older bleed and dried blood mixed with mucus. Closer to red means the bleed is more recent. Nose bleeds are not usually anything to worry about. All kids get them. However, if your child has excessively frequent brown, red, or bloody boogers, speak with your pediatrician. If brown to red mucus is being coughed up, this could be draining from the nose, or there may be a small bleed in the throat.

Probably the rarest color in adults, white is a common color seen in babies over the age of 1. White boogers are caused by excessive dairy intake, such as milk, while congested. Babies right around age 1 generally still drink quite a bit of milk but may no longer be nursing or using formula. In kids or adults who drink less milk, white, thick, sticky boogers can be a sign of dehydration.

Keep in mind that anything that is inhaled or eaten can affect booger color. For example, once my toddler sucked on one of those non-toxic washable markers and had purple snot. Foods heavy in dye may also have an effect, like Kool-Aid.

There you have it, a what’s-that-color mean guide to baby booger colors. I would have loved to provide pics of each, but it seems nobody photos the gross, not-so-cute infection-like boogers. If you enjoyed this color-coded booger guide, check out this version on poop colors. If you have a toddler, you might also have need of some info on booger picking.