Perhaps the first sight of chickadees, puddles, and pussy willows is less climactic elsewhere in the world, but in Alaska, it’s a sign the extensive winter is over and the incredibly short summer is about to abruptly begin. If it’s getting warmer where you live, you and your baby better get out there and enjoy it while you can. If this is your baby’s first summer, there are a few things you should know.

Sunscreen should not be applied to babies under the age of 6 months, but after that, sunscreen is necessary even on cloudy days. Unfortunately, lots of babies react poorly to normal sunscreen. It’s just too harsh for their delicate skin. As a result, you’ll find a wide-range of sunscreen products designed especially for infants.

For babies less than 6 months old, be sure to use protective clothing, hats, umbrellas, or anything else that creates a shadow. It’s also best to try and avoid being ou 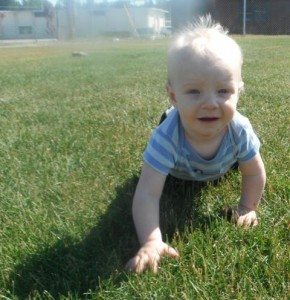 t for extended periods without ample shade when the sun is at its highest in the sky. In most northern areas, this is between 10 am to 4 pm. If you can get your baby to wear them, a pair of sunglasses is also recommended and looks damn cool.

As a rule when clothing your baby look at what you are comfortable wearing, and then add no more than two layers. This is especially important in the summer as overheating is common. Remember to adjust your child’s clothing as you adjust your own. If you’re too hot, chances are he/she is too. This makes light layers an awesome summer choice.

Look for outfits that cover a lot of skin, but also breathe allowing that amazing summer breeze in. Choosing light-colored clothing may also help keep your baby cool; darker colors tend to draw sun, while lighter shades reflect it.

Bugs and other unintentional unfriendlies:

If you’re outside, chances are your baby will encounter bugs of various species, some of which are a bigger problem than others.

In the case of bees, you can try to keep your child free of sticky yum-yums– especially those high in sugar. Clothing in the shades of red and yellow also tend to attract bees the most. In the event of a sting, flick the stinger out with something flat like a credit card and then apply a thick mixture of baking soda and water as soon as possible. Some parents also swear a bit of toothpaste on the sting works well. Afterwards, keep an eye out for allergic reactions such as excessive swelling, trouble breathing, and hives. Sting allergies can be deadly.

For spiders, avoid areas where you often see them. Most spiders are non-aggressive and harmless, though there are a few species that break this rule such as the hobo and the brown recluse. If your child is bitten, watch the wound closely for blistering or spread of a growing red area around the bite. In either case, seek medical attention immediately.

Mosquitoes are probably the most common of bug aggrivators. Avoid shady areas especially near water sources 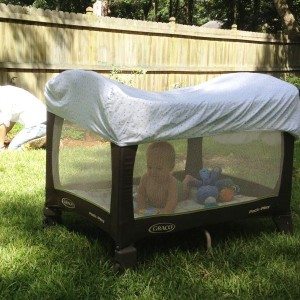 such marshland or lakes. Infants older than 2 months can use a bug repellent that contains no more than 10 percent DEET. Many manufactures make children’s bug spray as well. For younger babies, that same clothing that shields them from the sun can help prevent bug bites. There are also certain natural substances that mosquitoes are not fond of such as garlic, lemongrass, and lavender. You might consider a baby play yard covered by a sheet if they are particularly viscous.