My kids weaned from the bottle with ease–during the day that is. As toddlers, all four still clung to that nippled-relic of babyhood at bedtime, and stories of baby bottle rot fueled my feeling that big kids didn’t need bottles. However, if you’ve made it to the toddler stage, you likely know that discovering your child shouldn’t have something is a lot easier than taking it away. Breast or bottle fed right from birth, babies are taught to associate milk with sleep. 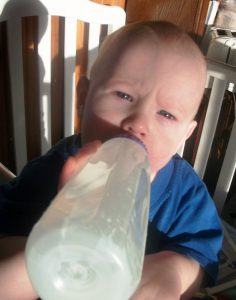 Why should I wean my toddler from night and nap-time bottles?

That was a big question for me. A bottle at bedtime really comforted my toddlers. It also helped when they awoke from nightmares. Often they didn’t drink much of the milk, just held the bottle like a security blanket. I thought to myself, eventually they’ll give it up on their own so what does it hurt? Sadly, it does hurt.

Prolonged pacifier or bottle use can cause dental deformities including over, under, and cross bites. On top of that, the bacteria that like to cause cavities like to feed on the sugars present in milk, which just so happens to pool around the teeth while sleeping. As a result, children who sleep with bottles often develop what dentists call baby bottle tooth decay or rot. Between the two, a toddler who is allowed to bottle feed at night may be smiling at bedtime, but it likely won’t be a very pretty smile after a few years. Ideally, according to dentists, babies should cease nighttime feedings and be weaned from the bottle onto a sippy cup if bottle-fed by 6-12 months of age.

How do I wean my toddler from nap and nighttime bottles?

While there may be subtle variances in each, there are basically two ways to go about bottle weaning a toddler at nighttime or nap.

This is pretty cut and dried. You take the bedtime bottle feeding away, suffer the drama, and eventually your toddler will get over it. Some parents are shocked to find their toddler isn’t that upset by it. Others have a long tantrum-blocked road ahead of them. It may help to exchange your child’s bottles for something, for instance, like a nighttime stuffed friend. You can even make up a bottle fairy, much like the tooth fairy, that will come and switch the bottles for the bedtime snuggly.

Your other option is to take it slow and gradually remove the bottle from your toddler’s night or naptime routine. This is where the slight variances come into play. You could slowly decrease the amount of milk in your toddler’s bottle until it is no more than an empty plastic snuggly and then take it away, which makes it less heart-breaking.

You could also simply replace the milk in your toddler’s bottle with water, which eliminates the worry of baby bottle tooth decay, and then slowly decrease the water in the bottle, adding it to a sippy cup. Water is fine all night long and a sippy cup does not cause dental alignment issues as your child won’t be sleeping with it in his or her mouth. Some parents also add a stage on this one where they water down their child’s milk before switching to water. Personally, I find the idea of watered-down milk fairly unappetizing, so this may help deter desire for bottled comfort.

If you just can’t decide which way you want to go, you can take away the bottle cold turkey and introduce a milk-filled sippy cup which you then use one of the gradual techniques with. Alternately, you could offer an empty bottle and a full sippy cup, and let your toddler choose to ditch the bottle, because it’s empty. Also remember that if something just isn’t working and you’ve given it plenty of time (it will take time), there’s no shame in switching your game until you find something that works.