As the busy mom of three busy boys, I certainly don’t always have the time to cook dinner, but I don’t really like to eat out. Then one wonderful Christmas, I was given a Crockpot. I have to say the Crockpot is a massively underrated kitchen gadget. It makes meals that taste like you slaved all day, that really only require a few moments prep-time. However, this article is not about Crockpot cookers. No, this article is about something far better birthed by Crockpots — chicken pot pie. My Crockpot gift led me to explore many recipes, but none so belly-busting as the one I have worked out for chicken pot pie. But first…

Who is the genius behind pot pie?
You’d easier answer whether the chicken or the egg came first. The idea of stuffing pie with meat dates as far back–and possibly further, than 5th century Rome. In fact, the savory pie out dates the dessert version by a long shot. Originally, the purpose was to keep meat moist, later Europeans turned the dish into one fit for a king. Literally, potpies were considered an art form often served to royalty. The peasants did eventually begin eating the dish, but only because the addition of breading caused the soup to feed more mouths. Since nearly every civilization in existence has adapted, improved, and tweaked pot pies.  How’s that for some pointless trivia to go with your meal?

Ready for that recipe? 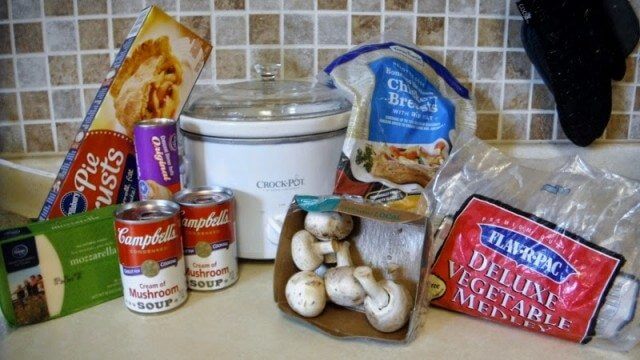 OK, first you need some chicken. It doesn’t really matter what cut, you’re going to cook it to bits anyway. I’ve used boneless breasts, and it tasted the same as times I used chicken thighs. Just drop it  whole into your Crockpot. Sprinkle garlic powder, black pepper, salt, a pinch of parsley on top. You don’t even need to thaw it provided you have enough cook time.

Next, add two cans of creamed soup. I’ve tried cream of chicken, mushroom, broccoli, and celery. All of the above were delicious, so it’s really up to your personal preference. Personally, my favorite is mushroom. You can also mix and match soups, for example try one can mushroom, one can chicken. Then, add water, milk, or a can of chicken stock.

Turn your Crockpot on high, and leave it sit for, oh, as long as you want. I usually do 5-8 hours. You will want to periodically stir the pot. When it’s “done” the chicken will have fallen apart, creating a thick gooey soup with shredded chicken. If you used boned or skinned chicken, now you’ll need to take two forks and remove any skin, bones and cartridge, unless you don’t care about picking it out while eating.

Once you’ve finished, add diced potatoes. You can peel them if you wish, but didn’t your mother tell you the nutrition is in the skins? Potatoes cook slowly in Crockpots, so chances are your mixture will need to cook for around another hour. If you want to save time, you can pre-cook diced potatoes to soft in a pot of boiling water on the stove top and add it to your crock pot fully cooked.

Once your potatoes are in and cooked if you choose not to use the stove-top method, add in carrots, celery, peas, beans, and sweet corn. You can add other veggies if you like as well, such as turnip or rutabaga. If you’re lazy, you can opt for frozen petite mix. If you use fresh, you may prefer frozen peas, as they hold up better. Now let that cook until the veggies are softened, or cooked if you used frozen. In the meantime, fill two 9-inch pie tins with crust or line one casserole dish and bake until golden.

Once the veggies are cooked, your base is complete. I should note you can turn this into Sheppard’s pie by topping with mash potatoes, or dumplings by moving the mixture to a pot, and dropping biscuit mix on top. In the later case be careful, it will scorch easily. 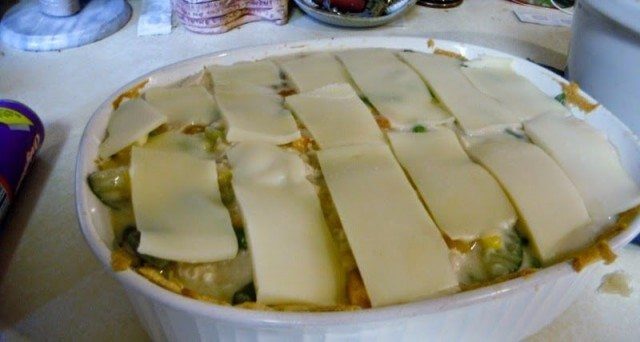 For pot pie, pour the mixture into the prepared crusts, and add a layer of cheese on top, because everything is better with cheese. My favorite to use is Muenster, however, I have used many kinds of cheese. Cheddar works just as well. Now, top the pies with croissant dough.

Note that the pie crusts and croissants will have a different baking temperature with the crusts requiring a higher heat. Once the crusts are done, turn off your oven and crack the door for about 5 minutes to lower your oven temperature.

Bake as instructed on the croissant packaging until golden on top. Let cool, and enjoy.

The quick version if you don’t want to read all that:

Place chicken, soup and milk with seasons of your choice in Crock pot on high for 5 to 8 hours until chicken is cooked. Cook potatoes on stovetop to soft in boiling water. Add to soup base. Add petite mix and cook to soft. Parbake pie crust in desired pan (2 9-inch pies or one large casserole). Remove from oven and add soup base. Top with cheese, then croissant dough and bake as directed on croissant package.