Diaper rash is probably the most common baby bane in existence affecting, well, pretty much every baby ever born at some point. This makes diaper rash treatment a valid topic of discussion among parents.

There are numerous types of diaper rash, but the appearance is generally the same, redness in the diaper region which may range from a few sore pink spots to an all over puffy, hot and even bleeding mess– and just about everything in between. Many people assume diaper rash is always a result of a parent that isn’t changing their baby’s diaper often enough. Though this is one cause of diaper rash, the various types of diaper rashes all have different causes and many of them have nothing to do with parental error. 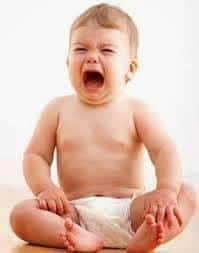 Diaper rash treatment is basically the same as far as home methods no matter the type. Knowing the type of rash will, however, help prevent the same type from occurring again. If it was, for example, caused by the ingestion of a certain food and allergy-based or a new type of diapers rubbing on the skin, or even an environmental element such as hot weather, these are all preventable causes of diaper rash. Evaluating the type of diaper rash will also help you better know your baby’s skin as a whole to keep it healthier all over.

The basic causes of diaper rash include:

-Regular diaper rash: This is usually just caused by prolonged exposure to moisture, but you may also notice it after your baby starts solid foods if he/she has eaten a lot of high-acid foods or fruits. High heat will often make diaper rash occur more frequently or actual heat rash may be mistaken for diaper rash. Some babies are also just more prone to diaper rashes than others.

-Allergic reaction: If the rash is less on the bottom and more where the diaper touches the skin, such as by the waist line, you may actually be looking at a contact rash. Try changing diaper brands. Food allergies can also cause consistent diaper rash. If you notice a rash after any major routine change from laundry soap to the menu, change back, let the rash go away, and re-introduce, if the rash comes back you have your culprit.

-Yeast diaper rash: Finally, sometimes the natural balance of yeast in your baby’s digestive tract may go out of balance. Yeast diaper rash doesn’t respond to ointments and may be accompanied by white patches in the mouth called thrush. You can treat yeast diaper rash at home with over the counter yeast creams such as Mono-stat, however, if your baby also has thrush you will need a prescription from your pediatrician.

-Begin by keeping the area extra clean and dry.

-Change diapers as frequently as possible and try to never let the baby sit in a dirty or wet diaper. You don’t necessarily have to wake your baby if he/she is sleeping unless it’s a poop butt.

-Consider ditching your baby wipes and using a small squirt bottle to rinse baby’s butt after peeing or give a quick tub rinse for poop butts to avoid the irritation of wiping. Pat the area dry with a soft cloth or allow to air dry.

-Try to let your baby hang out naked for awhile, the fresh air helps. You can place a plastic cloth below his/her blanket to prevent messes in younger babies.

-Consider using a diaper rash ointment. These ointments contain petroleum usually to form a barrier on the skin from moisture. Many also contain zinc oxide or other medications to help ease the pain and speed the healing of diaper rash. You can purchase these creams just about anywhere.

-Put diapers on loosely rather than good and tight or buy one size bigger than needed to use during diaper rash treatment. The extra room will allow for better air circulation.

Remember, if you are following all these measures and the rash is still present in 3 to 4 days and shows no sign of improvement or is accompanied by fever, see your pediatrician.

Preventing diaper rash is a good final step to take after you’ve treated one. Prevention is very similar to treatment. Be sure to keep your baby’s diaper dry and clean.. A good rule of thumb is to check baby’s bottom every two hours minimum.

Next, make sure you are using baby wipes that aren’t irritating skin. In some cases, you may even need to make your own to ensure they are gentle enough for your baby’s skin.

Find a diaper that fits your baby well, secure but not too tight as even baby bottoms need air to breathe. Be sure it’s not the materials in the diaper causing the rash. I also have a post on telling the difference between diaper rash and an allergy. Anytime you change laundry detergents, soaps, etc you should watch for rashes.

When introducing solid or new foods be sure to watch for allergic reactions and cease feeding anything that causes diaper rash until your child is older.

Finally, breast feeding has also been shown to reduce the occurrence of diaper rash. If you choose to do so, do so as long as possible.