Pregnancy: it’s a big responsibility and often leads you to question and worry over things you normally wouldn’t think twice about. Worse, it recreates normal on a daily basis. One topic that seems to be of particular concern while pregnant, but also one no one really wants to talk about, is pregnancy discharge. I mean, you’d think it gives some hint about the status of your pregnancy, right? But, when should you be concerned with pregnancy discharge? What’s normal, and what’s not? Let’s take a look at common colors and textures of discharge during pregnancy and why they might happen. 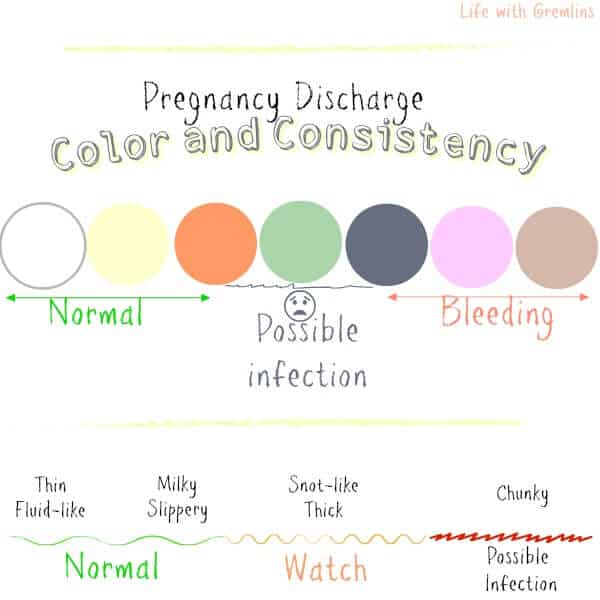 You can get a rough overview of just what vaginal discharge is and what’s normal pre-pregnancy in this post for the non-belly fruit holders.

First off, is it normal to have more discharge when pregnant?

Yep. Increased blood flow and a huge spike in estrogen levels are believed to be the culprits behind the copious discharge most pregnant women deal with. You may find thin panty liners helpful. They can be changed throughout the day and may help reduce your chances of minor infections such as yeast and vaginosis (both of which are more common in pregnancy). Avoid the use of douches as these may increase your risk of infection. Pregnancy discharge should not have an unpleasant odor.

Pregnancy discharge colors: All the colors of the rainbow—almost

Brown pregnancy discharge is typically very small amounts of old blood mixed with normal vaginal discharge. This minor bleeding is usually a result of some sort of light spotting, which could have a wealth of causes (many of which are no cause for concern). We have an in-depth post on bleeding during pregnancy here, but it’s best to speak to your care provider about any prolonged signs of bleeding, including brown discharge.

Pink pregnancy discharge is also a result of blood mixing with vaginal discharge, but the bleed may be ongoing, more recent, or slightly heavier. The heavier the bleed, the closer to red the discharge will be. See the above-linked post on spotting or bleeding during pregnancy for possible causes.

Yellow discharge is typically cervical mucus that’s older or has been exposed to air. During pregnancy a plug of mucus forms in the cervix to prevent infection. This plug stays throughout your pregnancy, so it’s there for quite some time resulting in the yellowish shade. It may be pale yellow to near-orange in color. Hormonal shifts common in pregnancy also aid in the yellow hue. Yellow pregnancy discharge is normal and may even be one of the earliest signs of pregnancy. The exception to this rule is if the yellow discharge is accompanied by a foul odor, then it may be a sign of infection.

White pregnancy discharge is another normal shade. You may notice very thick white discharge as well. As long as the discharge doesn’t have an unpleasant odor, it’s considered normal. This is yet again a result of hormone shifts during pregnancy.

Clear is the final normal discharge color. You may notice you get more of this around the same time you would have been on your period or ovulated while not pregnant—you guessed it, more hormones at work.

Green pregnancy discharge is not normal and is often a sign of infection. Reach out to your care provider as soon as possible.

Grey pregnancy discharge is often associated with bacterial vaginosis (BV). You may also notice a weird smell after sex. Vaginosis is treated with antibiotics so you will need to let your care provider know, but this common infection is usually not cause for concern.

Textures and consistencies of pregnancy discharge:

Thin, fluid-like discharge is usually normal and just your typical increased discharge from pregnancy. However, a sudden increase in very water-like discharge could be mixed with amniotic fluid, which is not something to take lightly. Your care provider should be able to test a swab of the discharge to determine whether or not you are leaking fluid if you suspect your bags of waters may have ruptured.

Slippery or milky discharge is normal. You probably saw it pre-pregnancy but less of it.

Remember up there where we talked about yellow discharge and your mucus plug? Snot-like discharge is bits of that plug. It isn’t necessarily cause for concern to be losing bits of mucus plug, but it may be a sign you should take it easy for a day or two. If you have snot-like discharge in large globs or that is tinged with pink, seek medical care right away. You could be going into labor or experiencing a threatened miscarriage. Your cervix dilates towards the end of your pregnancy though, so if you are close enough to your due date that preterm labor is not an issue, strike that recommendation for medical help.

You might describe thick, white pregnancy discharge as chunky and that would be normal, but if it’s cottage-cheese like and kind of smells, maybe makes you a bit itchy, you’re likely looking at a yeast infection.

To summarize, pregnancy discharge ranging from clear to yellow is considered normal. Pink, red, or brown discharge may be a sign of bleeding, but doesn’t necessarily suggest miscarriage. Orange discharge may be a sign of bleeding or infection, and green or grey discharge is abnormal and very likely indicates infection. Texture can range from thin to chunky without concern unless you are also experiencing itchiness or off-odors (symptoms of infection). We hope this page has eased your concerns about pregnancy discharge or consistency changes. If you still have questions feel free to drop us a comment.