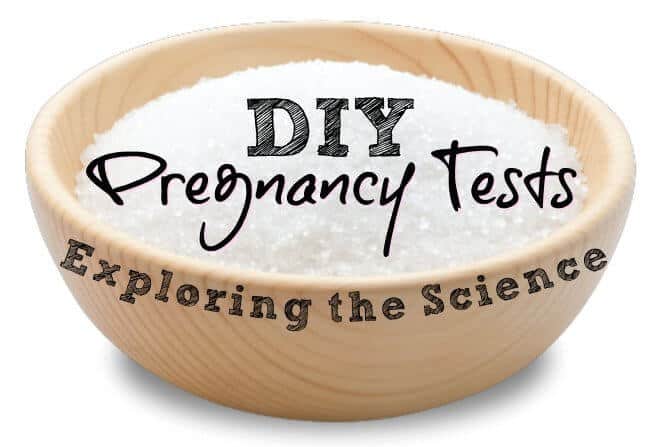 Method: place bleach in sterile container, add your urine, preferably first thing in the morning. Note that I could not find clear instructions on just how much bleach should be used. Drain-o is also sometimes switched for bleach.

Supposed mechanism of the bleach pregnancy test: hCG reacts with bleach—or drain-o or something?

Please note that this DIY bleach pregnancy test has the potential to be dangerous.

When ammonia is added to bleach toxic gases called chloramines are produced. While human urine does not directly contain ammonia, it does contain urea which breaks down into ammonia. As this process takes time, immediate fumes are unlikely to cause adverse effects, but it’s not advised to leave the bleach test mixture sitting for any longer than 5 minutes. The bleach pregnancy test should also be performed in a well-ventilated area should you choose to try it.

Jump to accuracy of the bleach pregnancy test.

Method: Place traditional vinegar in a clean container, add early morning urine (are we sensing a theme yet?) The mix should be 50 percent vinegar, 50 percent urine.

Next, since all of these DIY pregnancy test methods involve urine, let’s talk about what’s in urine that could possibly cause these reactions.
Jump to accuracy of the vinegar pregnancy test.

The composition of urine varies on diet, hydration level, and health. In general, though, urine is 91 to 96 percent water with the remainder being urea, chloride, sodium, potassium, creatinine, and inorganic/organic compounds such as hormones and proteins. The pH of urine also varies by diet ranging from around 5.5 to 7 with 6.2 being the average. High protein intake is associated with a lower pH, while a diet rich in vegetables and fruits tends to lead to higher pH.

The second question would be…

Does the composition of urine change in pregnancy, and if so how?

During pregnancy the function of your kidneys is altered. Most notably by an increased filtration rate of up to 50 percent! This can reduce the levels of creatinine, urea, sodium, and uric acid in urine. Levels of protein and glucose are often elevated, as well as estrogen and progesterone. The hormone hCG is also added, of course.

As an increased in blood volume also increases necessary water intake, many pregnant women are also dehydrated to some degree. This can lead to darker urine with a stronger smell. The pH of urine is unchanged in pregnancy, though changes in diet, nutrient intake, and a higher risk of infection can sometimes lead to a higher pH.

These changes vary by the stage of pregnancy you’re in. In very early pregnancy, where most ladies might be considering trying a DIY pregnancy test, hCG content would be the only major change.

For this test to work, it would have to be true that hCG reacts to bleach. There doesn’t seem to be any suggestion on why this would be, so first I looked at the composition of hCG.

hCG is a glycoprotein, meaning it consists of a complex sugar chain and amino-acid chains (proteins). While bleach can be used to degrade the proteins of glycoproteins, this wouldn’t create foaming.

Second, the hCG content of urine in early pregnancy is very low, and urine is already upwards of 90 percent water to begin with. Traditional pregnancy tests (of the non-DIY variety) don’t actually measure the level of hCG in your urine partially for this reason. Instead, they contain monoclonal antibodies and an enzyme capable of changing the color of a dye. These monoclonal antibodies are designed in a lab to bind to specific molecules (hCG in this case).

If the hCG isn’t what causes foaming, the next question would be if some other change in urine during pregnancy was capable of causing a reaction.

First, one could suggest the same chemical reaction that creates a risk of chloramine gas production creates the bubbling. Meaning someone with a higher urea content in their urine would be more likely to see foam than someone with a lower content. Urea content is often lower in pregnancy, by the way.

More likely though, you’re looking at a simple result of an acid-base reaction. Bleach has a pH of around 12, being very alkaline. As mentioned the average pH of urine is about 6.2 making it slightly acidic—more so on the low end of the scale at closer to 5.5. When you add an acid to a base the resulting chemical reaction creates gas as a byproduct. This gas results in bubbling and foam. This will happen regardless of ammonia content if your urine pH is low. As low urine pH isn’t unique to pregnancy, this would not accurately detect pregnancy.

In short, there is no scientific reason that the bleach pregnancy test would be accurate. What it will tell you is if your urine pH is low.

There is no element in the composition of hCG that would react to anything in toothpaste. The reaction seen in the toothpaste test is again, a result of pH, not hCG.

Toothpaste contains calcium carbonate, which has a pH of about 9.91 making it alkaline, just like bleach. Adding acidic urine will then cause the same bubbling reaction seen in the bleach test, just with a slightly-less extreme reaction. This is because the difference between the pH range of urine and the pH of calcium carbon is less than that of urine to bleach.

Worse, many toothpaste brands also contain sodium lauryl sulfate. Sodium lauryl sulfate is actually added to toothpaste to create foaming when water is added and the mix is agitated. By pouring in urine and then mixing it, you are adding a substance that is more than 90 percent water and agitating the mix.

This means the toothpaste pregnancy test won’t just not detect pregnancy, it’s also far more likely to give a false positive than the bleach pregnancy test as it doesn’t necessarily require low urine pH to see a reaction.

Sugar will dissolve in urine, because sugar is water soluble. However, if there’s too much sugar for urine to fully break apart and surround sucrose molecules (effectively dissolving the solute (sugar) into the solvent (urine)), clumping is the result. You may have seen proof of this in your pantry if you’ve ever left a bag of white sugar improperly stored. If moisture gets into the bag, large hard clumps will form. As a result, a “positive” sugar pregnancy test is just sugar doing what sugar does when limited moisture is introduced.

The warmer a solvent is when added to a solute, the faster it will dissolve because of the added molecular motion. This means very fresh urine may be warm enough to dissolve the sugar on contact (sink in) rather than clump. Depending on the depth of the sugar, there could even be a sink-hole of sorts with a clump at the bottom.

This would actually make sugar more likely to dissolve in pregnancy urine as increased progesterone raises body temperature, but it’s actually far more likely the clump or dissolve question, in this case, comes down to how much urine, how much sugar, and the shape/size of the container being used. Either way, this wouldn’t accurately detect pregnancy.

Vinegar, the traditional white variety suggested for this test, is colorless. If you add urine, which often ranges in color from pale yellow to amber, it will always change colors. So, at first blush it seems any vinegar pregnancy test is going to come back positive.

However, some tests state that the mix may turn slightly green. Vinegar has a pH of around 2.4, making it very acidic. The element in urine that creates color is called urochrome. Urine also contains trace amounts of urobilinogen, formed from the reduction of bilirubin. When exposed to an acid solution these elements separate in such a way that a blue-to-green hue can appear. Levels of urobilinogen are not affected by pregnancy, though, they are elevated in cases of liver strain or disease. Trace levels are normal.

So, there you have it. None of the popular DIY pregnancy test methods actually work according to science. There are a plethora of other options floating about such as soap, salt, etc. All of these methods can be explained by either pH reactions, sodium lauryl sulfate content, solubility, or well, just plain don’t work at all. You’re far better off spending a few dollars on an actual pregnancy test than playing with urine to try a DIY pregnancy test.

In 1350 BC, the ancient Egyptians would determine if a woman was pregnant by having her urinate on barely and wheat seeds for several days. The seeds would sprout in pregnant urine, but not in non-pregnant urine. This method has been tested in two studies, one in 1934, and another in 1963. It was found accurate roughly 70 percent of the time. Researchers suspect this may be a result of the increased estrogen in urine during pregnancy.

Two variety of seeds were used to determine gender in the Egyptian version of this test, however, studies did not confirm that part. If you wanted to try this DIY pregnancy test, it’s far from fast, but instructions are as follows.

Place barely seeds in a plastic bag with a paper towel. Moisten the bag daily with your urine. If within 3 to 5 days the seeds sprout, the test is considered positive. It should be noted that there were cases in the studies linked that seeds moistened with pregnant urine did not sprout, but there were no cases where non-pregnant urine (or even male urine) caused seed sprouting. This makes sense as estrogen levels vary from woman to woman in pregnancy, but are always higher than those who aren’t pregnant. This also suggests a false negative is possible, and a false positive is unlikely.

If you enjoyed this piece on whether DIY pregnancy test methods work or not, you may also enjoy:
When to Take a Pregnancy Test for Accurate Results
Early Signs of Pregnancy Quiz
Negative Pregnancy Test, Missed Period Explaination