Early signs of pregnancy are a tricky beast. The problem is many of the same hormones that are present in early pregnancy are also present just before your period. So, if you’re having a particularly hormonal cycle, you could seem pretty pregnant and not actually be pregnant. Likewise, if you are trying to conceive you may notice symptoms you actually get every month more assuming they are early signs of pregnancy. 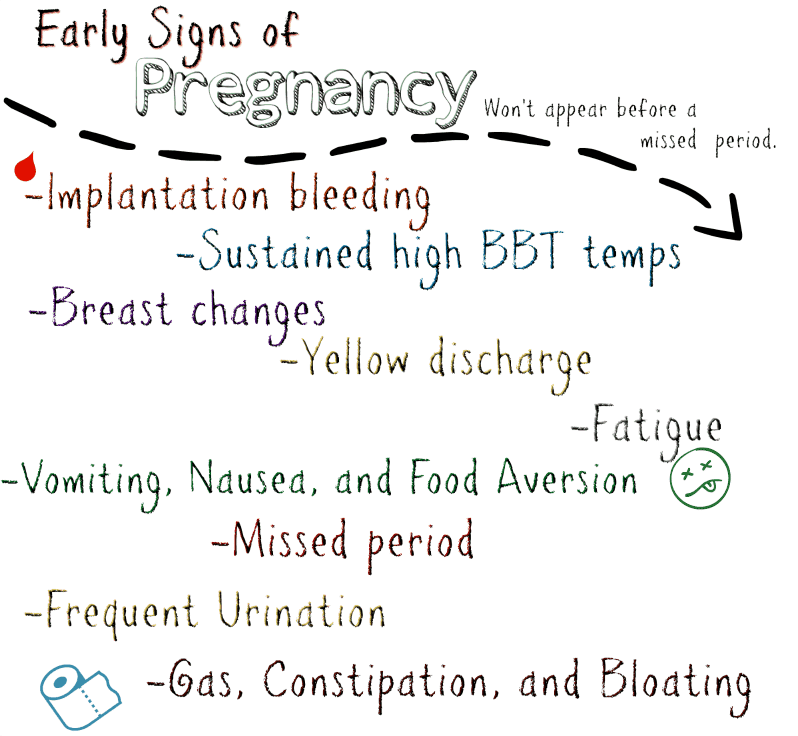 A note about early signs of pregnancy:

While many women claim they got early pregnancy symptoms say, 2 or 3 days after they ovulated or had sex, these symptoms are not relevant to pregnancy as implantation does not occur until 6 to 12 days after fertilization with the average being 8 to 10 days. You will not have pregnancy symptoms before a missed period unless your periods are irregular. As mentioned above, those women who think they experienced early signs of pregnancy really, really early were likely just dealing with typical PMS symptoms. If they were pregnant it was coincidental or they got pregnant earlier than they thought they did.

When taking this quiz or reading the early pregnancy symptoms below, please keep this in mind. It’s a waste of time to try to find out if you are or are not pregnant until after implantation, and so pregnancy, is actually even possible to avoid the confusion and heartache of constant wondering. I know the two week wait can seem an eternity if you’ve been trying to conceive, but hang in there.

You might also find this guide to determining your chances of pregnancy  or our implantation bleeding quiz helpful.

Implantation usually occurs 6 to 12 days after ovulation (which is typically about 14 days after the first day of your period). Occasionally, implantation will cause minor spotting which may be as light as single drop. Keep in mind not all women experience implantation bleeding and spotting before your period is not always an early sign of pregnancy. If you experience bleeding around the time of your period, this is also not necessarily proof you aren’t pregnant. You can read more about period-like bleeding while pregnant here.

Sustained elevated basal body temperature is one the earliest symptoms of pregnancy. After ovulation the hormone progesterone elevates body temperature slightly. When this hormone dissipates, the uterine lining is shed and your temperature will drop again slightly as your cycle begins. If you are pregnant, progesterone levels continue to rise rather than falling keeping temperatures high.

Once you become pregnant, your body creates a mucus plug within your cervix to protect your new baby from infection. Your cervix is the opening between your vaginal and your uterus. Early in pregnancy as this plug is formed, many women notice an increase in vaginal discharge which is often yellow in color and thick, sort of like snot. Though some women notice this same change just before their period begins. You can read more about regular vaginal discharge here and pregnancy discharge here.

Breast changes are often cited as one of the most common early signs of pregnancy noticeable as early as the first week after a missed period. This is yet another bi-product of rapidly rising hormone levels. You may notice pain, tingling, sensitivity, darkening of the area around your nipples, or just seem a bit bustier than usual.

Are you feeling really tired for no good reason? Making a baby is hard work, especially during the first trimester being that a baby goes from about the size of a pin  head to the size of your hand in 13 short weeks. While fatigue can be a symptom of all sorts of things, it’s also very common in early pregnancy. Again, this symptom would not appear until at least 6 to 12 days after unprotected sex, likely longer.

It’s suspected hCG, or the hormone that causes a positive pregnancy test, may be one of the primary culprits of morning sickness. While vomiting, nausea, and food aversion can all be signs of say, the flu, they can also be one of the early signs of pregnancy. Particularly if no other signs of sickness like a runny nose are present. Some women also experience odd food cravings or notice their tastes change.

Early signs of pregnancy: Gas, Constipation, Bloating and Other Gastro-issues

Progesterone, the hormone that sustains pregnancy, peaks in the first trimester. Coincidentally, it also works to relax smooth muscles– which is what your intestines are made of. This can lead to an increase in pregnancy gas, constipation, and bloating. Progesterone is present prior to pregnancy though, just in a lower concentration.

This was a trick question included in the quiz– unless you are much further along than you think. Yahoo questions abound with folks who claim they knew they were pregnant because they felt their baby move. Shy of about 10 week though, this is pretty much impossible, and even that early is unlikely unless you are carrying twins. Feeling movement just weeks after unprotected sex is likely gas or just muscle twitches. While I wouldn’t call no movement a sign, you won’t feel any this early either.

As early as 3 weeks after unprotected sex, if you are pregnant, your blood flow has already begun to increase. This increase cases your kidneys to go into overdrive which can cause more frequent urination. Of course, frequent urination can also be a sign of bladder or kidney infection or even just drinking lots of fluids.

Yes, I know, this seems a no brainer, but many women begin trying to find out if they are pregnant before a missed period, and honestly, that’s very difficult to do. You’ll notice nearly all of the points on this early signs of pregnancy page pertain to at least 6 to 12 days after unprotected sex with more women landing on the closer to 12 side. That’s pretty close to when your period would be due. On average pregnancy symptoms don’t appear before 1 week after a missed period. You can read more about when pregnancy symptoms start here or read our guide on when to take a pregnancy test to confirm your suspicions here.