Being a mom of three boys, one shopping bane has annoyed the shit out of me for the last 6 years—gender bias in stores. Want some clothes for your kid? Better hope he doesn’t mind wearing neon pink or pastel flowers, because in virtually every department store you’ll find an overwhelmingly higher number of girl clothing options vs boy. It’s not just pants and shirts either. This year I needed a pair of mittens for my youngest, and mind you I live in Alaska, where you’d think mittens would be plentiful. I found eight full wracks of girl gloves with every style and size under the sun in three locations in my local Fred Meyer. I found one half wrack of boy gloves mostly consisting of gloves for older kids with not a mitten in sight. My two year old ended up with baby mittens (those don’t have thumbs) until I could order something online for him. What do these stores think little boys don’t get cold hands? I seriously wanted to know why, so I tried to find out. 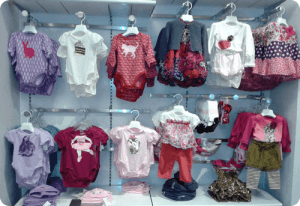 In a population which overall is about 50/50 girls to boys why do stores so biasedly load the shelves with clothes for little girls?

Well, first let’s handle the folks that are going to get offended by the phrase “clothes for little girls.” I’m all for gender equality. If my boys ask for something pink or purple—or even with pastel flowers—I’m open to that, but 99.9% of the time, they don’t. They want red or blue with Power Rangers or trucks or something, and they certainly don’t want a skirt. It’s their fashion preference, not mine. They wear what they like.

And while it wouldn’t really matter to me if my 2 year old wore purple gloves (the point is to keep his hands warm) and he likely wouldn’t care either being he’s 2, my kids get called girls enough because they are “pretty.” They are all blond, blue-eyed children with these gorgeous long eye lashes they just love to bat at you. At least in the case of my oldest child who can express his feelings more clearly, being called a girl is not cool. It bothers him, because he’s a boy. He knows he’s a boy, and he doesn’t like being classified as otherwise. It’s not that he finds girls offensive, it’s that he’s a not a girl. The same way if I tried to tell him an apple was an orange he’d argue with me doesn’t mean he thinks apples are better than oranges.

So, long ramble short, putting a boy already prone to being called a girl in purple gloves is a poor choice unless you have no alternative, and the stores should have an alternative, but they don’t. Back to the point, why don’t they?

The first logical thought would be, well, the stores have a gender bias because we do. Parents buy more clothing for their girls than for their boys, however, that’s not true. In 2004 (forgive me the dated stats, info on this was hard to find), 34% of children’s apparel revenue was from girl’s clothing, 30% boys, and 36% from “infant and toddler” clothing. 4% is not a massive overall difference. If what sold was what was on the shelves, you’d see baby and toddler goods in general out the wazoo not girl clothes only.

In addition, these stats are based on revenue, a percentage of a sales, and the same report noted that “the average family spends $107.28 (annually) on children’s clothing — $123.79 for each girl, $90.77 for each boy.”  Girl clothing costs more, which likely accounts for that 4% difference in revenue. Then you could suggest the reason that stores stock more girl’s clothing is because of the price difference. They make more profit off girl clothing not because it sells more, but because they charge more for it. Now why that is, I have no idea. I could not find any information justifying why items for girls would cost more than those for boys. Nor is there any financially sound reason that more could be charged for girl’s clothes than boys based on demand if the stats don’t show more girls clothes are being purchased.

In the absence of logic you’re left with “because I said so.” You’re left with a gender bias, with an unsubstantiated belief that clothing for little girls is in higher demand or somehow worth more. You’re left with a little boy with no mittens, and I don’t know why. And, personally, that pisses me off.

Whether you have a girl or a boy, you may find ways to save on kids clothing worth reading.