I’m always on the lookout for more things to do with my DNA results from AncestryDNA or 23andme—especially if they’re free or low cost. When I find said things, I also like to share them here, and well, I found a thing. GenomeLink is a DNA service that analyses your rawDNA to offer insight into lifestyle, nutrition, cognition, and personality genetic traits you may possess. This is done by checking your rawDNA against a list of single-nucleotide polymorphisms (SNP) that have been linked by research to certain traits. If you’ve tried Promethease (which costs $12), the service is similar in mechanism, but offers far less data in a more digestible format and focuses less on medical traits.

With a free account you receive 20 trait reports, or maybe 30, as their sign-up page lists 30, and their plan page lists 20. I counted 30 in my actual report. I’ll admit, I found the site itself a little poorly edited. Some links didn’t work. You couldn’t use the trait scroll bar. Some links didn’t do what I expected they would. It all sort of has a “beta” feel to it to me, but you know, if the info is good, I don’t care much about that.

The company did reach out to me after reading my AncestryDNA vs 23andme comparison and offered me a free upgrade ($39 value) to add to this review. This review wasn’t paid, and obviously I didn’t allow that offer to sway my review to insta-five-stars. My reviews are always unbiased. That upgrade added another 30 traits, and I’ll get a new trait in my inbox every Sunday.

Now I actually wouldn’t have needed the upgrade. I have to say most of the traits offered I had already seen either in 23andme’s health reports or Promethease’s data, and I’m sad to say I question the accuracy.

As a side note here, I am aware that having a genetic tendency for something doesn’t guarantee that it will present itself. I’ve had plenty of other genetic insights tell me things like I should be lactose intolerant, and I should have the long luxurious locks I’ve always wished I did have. The reason I question the accuracy of this service is that I have comparison data.

For example, here’s the first report from my GenomeLink account: Eye color. 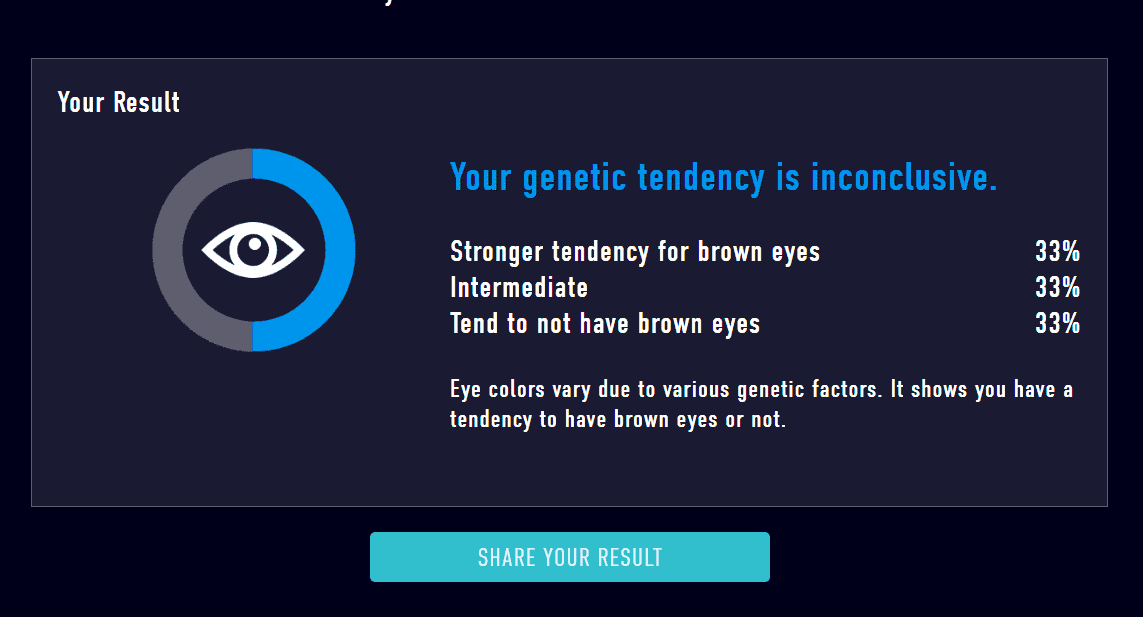 Ignoring the horrible grammar in this screen shot (or not?), Inconclusive? They couldn’t tell me what color eyes I probably should have, but they could tell me there’s an equal chance of brown, not brown, or intermediate (huh?). Now, let’s compare that to 23andme and Promethease….

23andme says my chances of blue, green, or a mix are 90 percent (my eyes are in fact blue green) and that brown has the lowest chance. There’s no thirds about it. 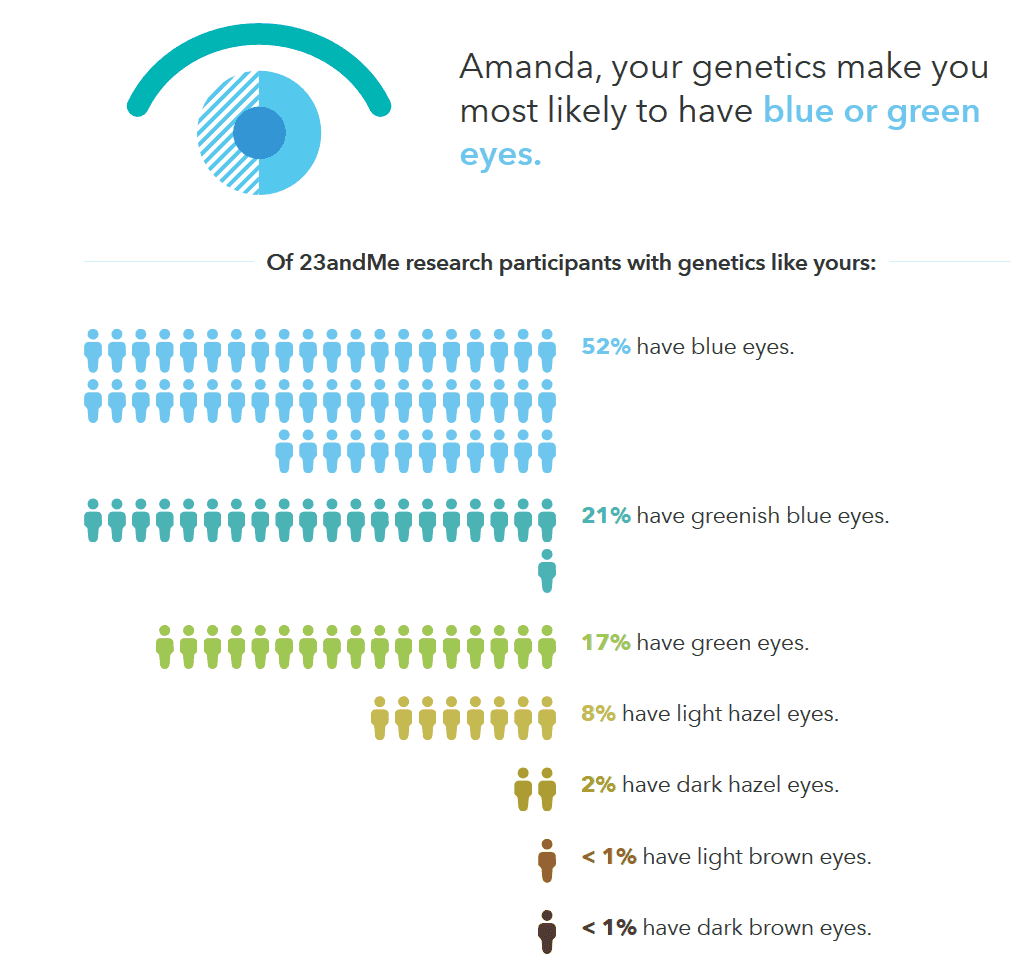 Promethease gave me too much data to screenshot it all for you, so you get just a small section, but to summarize, there were 14 markers associated with a higher chance of blue, green, or grey eyes, several giving a 99 percent chance, and not a single flag for brown.

Basic genetics makes that a logical finding being my parents, my grandparents, and their parents, all had blue or green eyes.

Many of the other traits listed in my GenomeLink report also didn’t match 23andme and Promethease’s reports (which did agree), and often they said the complete opposite. For instance, Genomelink claimed I was unlikely to have freckles, the other two reports said I was likely to have many. Genomelink said I had a 100 percent chance of having strong skin pigmentation. The other two said “very fair,” and I glow in sunlight, so that’s an accurate description.  I could continue, but I think the point is grasped.

If I had to guess, it’s actually the limited scale as far as the number of markers GenomeLink analyses that hurts it. In the eye color example, they looked at three markers, had they had a wider view, the strong chance of blue or green eyes would have been more statistically clear. This hypothesis is supported by the fact that of the 60 traits I had access to 18, almost a third, were inconclusive.

My overall impression of Genomelink was it is, in fact, a little beta, and the site really seems to aggressively push the up-sale. With some work on accuracy and site design, it’s a cool concept. If you tested at AncestryDNA it would give you access to the genetic tidbits you missed out on by not testing at 23andme without the data-overload of Promethease. The new traits in your inbox is also very calendar-of-the-day trivia-cool. I would definitely dig that it if I could trust the info I was being given.

As-is though? I would say go for the free version for kicks, but give it some time to see how they grow if you’re interested in the upgrade.