One fine day while killing another loaf of bread in a single lunch for our family of 6, my husband brought up making our own bread. We have 4 kids. I’m a full-time college student, and I work from home, at the time, I was pretty damn sure I did not have time to bake bread too. I also expected homemade bread to be more expensive. It’s weird, how healthy is more expensive in our culture, but it is. Nonetheless, I decided to look into it a bit more.  I think it’s that expectation that making bread at home takes hours, expensive ingredients, and possibly the trickiest of all, skill, that turns so many from trying it. Luckily, it turns out all three are false. Yep, making your own bread is actually faster than running to the store, cheaper, and really, really painfully easy with a bread machine.

Store bought bread vs homemade bread: Round one- Time and Effort

Now, I live 12 minutes from the nearest store, but even assuming you live right next door, you have to walk to get the bread, wait in line, then check out. Those are variables I can’t really calculate for you, so I’ll let you sub your own time in for store bought and just skip right to how long it takes to make your own bread. I’m a cheater, a dirty, lazy bread maker—or so bread making snobs who hate bread machines have said, and I don’t give two bits. It takes just under 6 minutes to load a bread machine with ingredients and press start. I timed it.

I use the Panasonic SYD-250. I did not have $300+ for the ever-suggested Zojirushi, but the SYD-250 comes in second on most review sites and is far more affordable. This model ran me $111 open-box off Amazon (new is about $130). It even has a yeast dispenser so you really do just throw bread flour, water/milk, salt, and sugar in the bin, fill the yeast dispenser, make your bread selection, and press start. For most of us 6 minutes is less than it would take to buy a loaf of bread. Below are actual pictures of the first loaf of homemade bread I have ever made in my entire life (it was also the loaf I timed, so don’t think that was an experienced knew-what-I-was-doing-already timing). 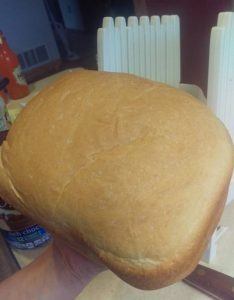 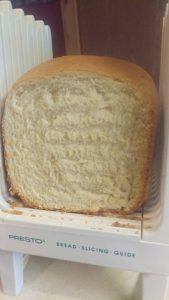 Suffice to say, you don’t need to be a baking expert to make good bread in one of these machines, and you don’t need hours—exactly. Those 6 minutes were hands on time. The loaf itself continued on resting, kneading, rising, and baking for another 4 hours. One downside to homemade bread is it takes some pre-planning. It isn’t instant.

The recipe used and your usual store-bought bread price is going to, again, throw some variables in here. I’m using the basic sandwich bread recipe from my bread machine, since sandwich bread is what most of us use. It’s, from what I can tell, a pretty standard bread recipe. Most seem to contain bread flour, salt, sugar, milk or water and powdered milk, and yeast. Here were my costs in Alaska where prices are generally much higher than the rest of the U.S. (Yes, we are part of the U.S. I swear.) I include my math so that you can easily sub your own local prices. Your price comparison is what matters. What your bread usually costs vs what it would cost you locally to make. I buy in bulk and recommend doing so if you can. For the flour be sure to pick a bug free container. I use a vittles vault.

Anyway, let’s break down the cost of a loaf of bread. I list the exact items I bought, but you don’t have to use those of course.

The per-loaf usage is 3 cups, rounding down, that makes for 59 loaves of homemade bread from 50 lbs of flour equating to 49 cents in flour for one loaf.

One ounce of salt is roughly 5 teaspoons, and the sandwich bread recipe calls for 1 ½ teaspoons. At 26 ounces per container that’s 86 loaves or 7 cents in salt.

You try: Take the number of ounces in your salt container, multiply by 5, divide by 1.5, divide your cost by this number.

Regular white sugar may run you a little less. I prefer pure cane sugar, because it tastes the same and is less processed. The recipes uses 1 ½ tablespoons. There are 29 tablespoons of sugar in a pound, making for 77 loaves per 4 lb bag or 7 cents in sugar.

You try: Take the number of pounds in your sugar bag, multiply by 29, divide by 1.5, divide your price by this number.

Each pack contains roughly enough for two loaves (at 1 teaspoons per loaf) so that’s 16 cents in yeast.

You try: Check your yeast label for the number of teaspoons, divide your total cost by this number.

Milk: The original sandwich bread recipe in my book calls for powdered milk and water, I use whole milk instead because powdered milk is expensive up here, and I don’t usually buy it. One gallon of milk runs me $3.99. One loaf takes 1 ¼ cup. There are 16 cups in a gallon, making for 12 loaves (with a bit of milk left over) per gallon or 33 cents in milk.

You try: Take the cost of a gallon of milk and divide it by 12.

Butter: Butter is not in all bread recipes, or even sandwich bread recipes, but it was in mine and will up your cost. Some have suggested it can be replaced with oil or with the fat content of whole milk may not even be necessary. I have not tried yet, but will update when I do. I buy my butter in bulk at 16 sticks for $11.89. The recipe calls for 1 ½ tablespoons. There are 8 tablespoons in a standard stick of butter making for 5 loaves per stick (with extra), 85 loaves per $11.89, or 14 cents per loaf in butter.

You try: Multiply the number of sticks you purchased by 5, divide the price by this number.

Here at least, even the bottom-of-the-line generic bread is $2 a loaf. That means in Alaska, even including whole milk and real butter, it is 74 cents less to make your own bread, that is when you don’t factor in electricity or the cost of the machine. I honestly could not calculate the energy use part, I don’t know how much my machine uses per cycle, because most of the time it is resting or letting the bread rise. It will take us 150 loaves to recoup the cost of my machine in savings though—with a family of 6 that won’t take long.

Even being faster and cheaper though, is homemade bread really healthier than store bought bread?

The biggest thing with making your own bread is that you know what’s in it. You obviously aren’t getting the preservatives and such that store bread has (homemade bread also will not keep as long unfrozen as a result, just as a to-keep-in-mind). As an example, not to pick on old Sara, but she’s a pretty popular mid-range bread. Sara Lee Soft White Sandwich bread contains:

That is a pretty lengthy list compared to bread flour, salt, sugar, milk, butter and yeast—though my flour is enriched and contains ascorbic acid (which is vitamin C), reduced iron, and theamine mononitrate (Vitamin B1). So there are some slight overlaps. I have highlighted the differences. Some of those are simply added nutrients such as folic acid, niacin, and riboflavin or differences in recipe such as the wheat gluten. Others are replacements, such as switching real sugar for high fructose corn syrup and butter for soybean oil. Those changes are arguable as to whether they are or aren’t better or worse for you. Then there are some controversial emulsifiers and preservatives such as calcium sulfate, also known as plaster of paris, yes, like wall plaster.

There’s also that with homemade bread you have more control. You can find recipes that contain less fat, that are more diabetic friendly, higher or lower protein, gluten-free, etc without paying the usually outrageously high prices these specialty breads run pre-made.

Now, whole wheat is, however, apparently a bit of a challenge when making your own bread and does take some practice. Though the question as to whether store-bought whole wheat is as healthy as you think it is also makes for a lengthy and interesting topic, one I do plan to cover and will be linked here when finished.

If you’re looking to eat clean and cut out processed foods, making your own bread is a no brainer, but, as we just learned, it’s also a great choice for those looking to save time and money–plus, seriously, there is no better air-freshener than fresh-baked bread.