For pregnancy to occur, sperm must find its way inside a female reproductive tract near or at a fertile period—but can sperm survive outside of the body? Can you get pregnant from semen on hands? What if you wash your hands? What about semen on bed sheets? In a hot tub? On a toilet?!? Given that pregnancy is a pretty big deal, these are pretty important questions to know the answers to, and all the above hinge on the viability or lifespan of sperm in various situations. 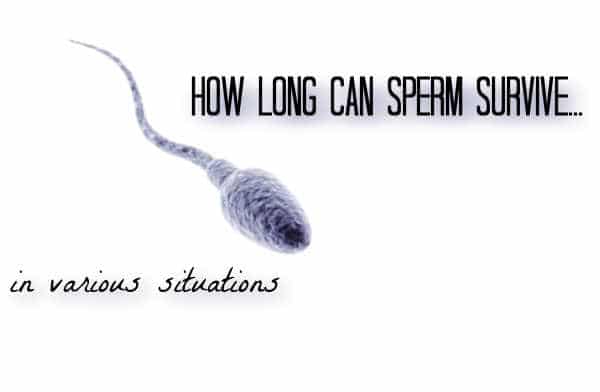 Sperm Viability at a Glance:

Too long? Don’t want to read all that? Below you’ll find the quick answer for each situation. Note that on all surfaces outside the body, semen should be considered capable of causing pregnancy until dry. The time frames given below are estimates based on probable drying times. Dry semen can’t cause pregnancy.

Inside the male body: 42 to 76 days, 3 to 5 days of which sperm is mature, and up to 4.5 hours in the urethra.
Inside the female body: Up to 5 days, with the first 48 hours being the most viable.
On skin near genitals: Around an hour.
On skin elsewhere (such as hands): Around 30 to 40 minutes.
After washing hands, rinsing, or in water: Water will destroy sperm when outside the body.
On fabric: A few minutes.
On hard surfaces: Depends on the surface temp, a few minutes to hours.

How Long Do Sperm Live Inside the Body:

Inside the male body:

This is actually a trickier question than you’d expect. It takes between 42 and 76 days for a single sperm to mature, and the average male makes about 1,500 sperm per second. However, mature sperm only live for 2 to 5 days before they’re broken down and recycled by the body, so to speak.

This means, technically, sperm live in the male body for months, but they are only viable in the body for a few days. Regardless, sperm are produced at a constant rate, meaning there are always viable sperm in a male’s body, assuming functional reproductive health.

Also note that while age slows down the rate of sperm production, it doesn’t stop it—the oldest man to father a child was 102 years old! Likewise, because there is this continuous cycle of production and recycling, the body doesn’t really store sperm. Semen, the fluid sperm are carried within, is produced fresh at each ejaculation, and the sperm present range from newly mature to a few days old.

After ejaculation, sperm can also remain viable in the urethra for up to 4.5 hours. This is one reason when practicing the pull-out method, urination is recommended between acts, though as it’s unknown if this is the only method by which sperm can make their way into precum, this may not always be effective.

Inside the female body:

The lifespan of sperm inside the female body is generally accepted at a max of 5 days, with the first 48 hours being the most viable. However, some research has also suggested this time frame may vary from woman to woman and even from cycle to cycle. For instance, it’s suggested that intercourse closer to the beginning of a woman’s menstrual cycle shortens the viability of sperm due to less favorable vaginal pH. This implies that the closer to ovulation the sex occurs, the more likely sperm could survive longer in the female body

How Long Do Sperm Live Outside the Body:

On your skin near genitals:

Sperm viability outside the body depends on quite a few factors, but the jest of it is, once the sperm dries out or is otherwise damaged, it can no longer cause pregnancy outside of assisted reproduction. This means that the more ideal the conditions are where the semen was deposited, the longer sperm can survive. It’s also important to note that oxygen does not kill sperm, and sperm don’t die on contact with skin or air. Rather the drying factor of air eventually leads to sperm becoming permanently immobile.

The ideal conditions for sperm are about 93 degrees (slightly below body temperature, much like that of the testicles) and moist with a pH around 7 to 8. However, semen sample lab instructions often suggest room temperature is ideal in cases where storage time is less than one hour.

The genital area can check all these boxes. In females, the vulva area usually runs around 91 to 93 degrees with a skin pH around 5 to 6 (dry) and is naturally moist. The penis area runs between 93 and 89 degrees (ranging from base to glans), also with a pH of 5 to 6. These temperatures are affected by surrounding temperature and activity level (in a hotter room or during the usually active act of intercourse, both would be warmer).

As a result, sperm is more likely to remain viable near the genitals than elsewhere on the body. Unfortunately, just how long would depend on how much semen was present (to slow dry time and alter skin pH) and how close it was to the genital area (where skin temp is typically a bit higher).

To give a rough idea, in a new technique used to air-dry sperm for assisted reproduction (again, dry sperm can’t cause pregnancy outside of a lab), semen placed on a glass lab slide and heated to 98.6 degrees dries in 25 to 30 minutes. While this is internal body temp, the surface of your skin, even in the genital area, is, as mentioned, a bit cooler than this, and likewise moist not a glass slide with a thin smear. Given this, assuming you don’t wipe the semen off, semen may remain viable up to an hour or so near the genital area.

On your skin elsewhere (Such as on hands):

Not only do other parts of your body have a lower temperature, but they also tend to be far drier and may contain trace contaminants (such as soap residue, detergents or lotion) that would shorten the survival of sperm. For instance, your hands run between about 87 and 90 degrees but cool more proportionally to the surrounding temperature. They are also dry. As a result, sperm on more exposed skin like this would dry closer to the rate of the slide mentioned above, at around 30 to 40 minutes.

Regardless, it’s important to keep in mind that the probability of pregnancy from sperm on hands or other skin when not near the vaginal opening is exceptionally low. For one, most would not let semen just sit on their hands or skin to dry. Washing off semen, even with just water, is sufficient to destroy any sperm present due to osmotic shock. Likewise, wiping dry will transfer any sperm to the item used.

Side note, or more cautionary advisement, water will not kill sperm that are already inside the body. Washing a vagina with water or having sex in water, like in a hot tub or bathtub, will not lower the chances of pregnancy if ejaculation occurs within the vagina.

Back to the topic at hand, for perspective, the average ejaculation contains 200 to 500 million sperm, but even when ejaculated into the vaginal canal, many sperm are lost as they make their way through cervical mucus, the cervix, uterus, and Fallopian tubes to an egg. In fact, only a few hundred or approximately .01 percent find their way to the egg, and even then, fertilization and implantation only succeeds about 25 percent of the time. The chances of a few stray sperm from, say, your hands, resulting in pregnancy is then astronomically low unless fresh, visible semen was inserted.

As fabric will absorb moisture from semen, drying time is reduced. Fabric is also rarely of a proper temperature to support the survival of sperm. Given this, sperm will only live a few minutes on cloth unless the cloth is saturated to the point moisture can be felt (soaked). Note that sperm also require a medium (such as semen or cervical mucus) to remain motile, so no, they can’t ‘swim’ through clothing, unless again, the fabric is so saturated a medium is still present.

In open air on a hard surface:

As mentioned, on a hard glass slide at 98.6 degrees, semen will dry in about 25 to 30 minutes. At room temperature (closer to 70 degrees), this would be slower. For instance, semen samples typically liquefy for examination within 15 minutes at room temperature (liquefaction would be a step before drying)—anything over 60 minutes is considered abnormal. This would imply that the drying time (and so survival time) of sperm on hard surfaces such as a toilet seat is highly variable depending on temperature, likely ranging from minutes to an hour. None the less, the chances of pregnancy from such a situation are virtually non-existent.

As mentioned earlier on this page, sperm will quite literally explode due to osmotic shock within minutes of exposure to water if the protective layer of semen is washed away. Hot water or cold, the result is the same. Again, note that this does not apply inside the body, do not attempt to prevent pregnancy by ‘washing’ sperm out. Likewise, having sex in water will not prevent pregnancy. The only 100% reliable way to prevent pregnancy is to not have sex, however, male and female condoms, spermicide, and birth control pills are all relatively reliable alternatives when used correctly.

So, there you have it. Probably more than you ever thought you’d know about the lifespan of sperm. Still have questions? Feel free to drop us a comment. We do our best to help.

You may also find helpful:
Pregnancy Probability Quiz
How Effective Are Condoms?
Can You Get Pregnant for Precum?