There are a few opinions in life that just might as well be considered fact. One such opinion is that kids love candy. You’d be hard pressed to find one example that disproved the suggestion, but since we can’t go surveying every kid on earth, it remains a simple opinion, an opinion my three often chocolate-faced children would support. With Halloween quickly approaching, those same three sweet-toothed kids have a great deal of satiating treats coming their way soon. The holiday season in general is ripe with sugary goodness, so now seems a better time than ever to review how much candy is too much for kids and ways to make candy healthier for kids. 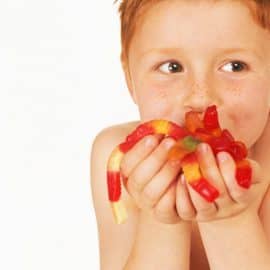 How much is too much candy for kids?

A study done between 1999 and 2004 found a correlation between candy consumption and lowered obesity rates. No, that isn’t a typo; children that consumed candy were found to have a 22% lower incidence of obesity. Those same kids were also at a lower risk for cardiovascular disease. The study, however, did not allude to why or to how much candy consumption each child had. The World Health Association recommends kids get no more than 10% of their daily caloric intake from sugars. You can calculate your child’s need by taking their height in inches and multiply it by 40. For example, a 32-inch tall toddler needs 1,300 calories. Then take your result, and multiply by .1. This is 10%. So the same 32-inch tall toddler should not exceed 130 calories from sugar — at least not regularly. To give you an idea of how much that is, a regular sized snickers bar contains 120 calories from sugar. (1 gram sugar on the package equates to 4 calories.) The occasional, say Halloween, binge certainly isn’t going to kill your tot, but keep this recommendation in mind for everyday consumption.

How can you protect your child’s teeth from candy-induced damage?

Dentists recommend avoiding sour candies as they contain acid which can erode enamel. Any type of candy for kids that sticks in the teeth is also not recommended, such as taffy. You can help keep your child’s teeth healthy by offering water after consumption. Try to teach your child to “squish” the water before swallowing; you can make a game out of it. Allowing your child to eat candy just before bed is also frowned upon, as it decreases salvation during sleep hours, allowing sugars to sit in the mouth longer. The best time as far as your child’s teeth are concerned to eat candy is just after a meal or snack. The idea of giving your child a piece here and piece there has also been shown to be worse for teeth than handing them all the pieces you intend to give at once. Avoid spacing out treats in an effort to be healthier.

Is there such thing as a healthy candy for kids?

That would depend on what you consider healthy. Candies tend to naturally vary in sugar levels, protein, vitamin and mineral content, and fat, but there isn’t really a catch-all “healthy” candy. Even dried fruit often sticks in teeth and according to dentists, can be as bad for teeth as regular candy. In the end, you are best just sticking to allowing candy in moderation, no matter the kind.