How many sperm does it take to fertilize an egg? That may sound like a corny joke intro, but while the average ovulation only produces a single fertile egg, the average man ejaculates 280 million sperm. None the less, it just takes one sperm to fertilize an egg– in fact there can only be one. An egg can never be fertilized by two sperm. So, why so many? I mean if you only need the one sperm and egg, why 280 million? Because only a fraction of those sperm are going to make it through the cervix, and then only a fraction of those will make it through the uterus, and a fraction of those to the fallopian tube where the egg awaits. Once those sperm get there, the egg doesn’t just let them waltz on in either. It takes an attack of sperm to break down the thick layer of protective cells on the egg. Now that’s team work.

It’s that one sperm and egg that ultimately decide whether a baby is male or female. Specifically, it’s that lucky 1 in 280 million sperm. You see a fertile egg, also known as an ovum, contains one X chromosome, while sperm contain either Y or X. Whether an X sperm (female) or Y sperm (male) fertilizes the egg is the big decider. The only way to change whether you conceive a boy or girl is to “sway” the odds of one or the other sperm type being that one sperm.

Fun fact: The Y chromosome only evolved around 200 to 300 million years ago, before that gender was determined by environmental factors alone, but do they still play a part? We’ll get to that…

Semen is composed of roughly 50% X-bearing sperm and 50% Y-bearing sperm. While this ratio varies slightly from man to man, it remains roughly 50/50 even in men who sire multiple children of the same gender in a row. The natural sex ratio in nearly every country, however, is 49% female to 51% male, or 105 boys to every 100 girls born. So, if the percentage of Y-bearing sperm doesn’t cause this slight ratio difference, what does? Why do some women—like me—end up with multiple same gender children. After three boys, I set out to answer that question.

I’m not the only one either, hundreds upon hundreds of studies have been done to discover methods of “gender swaying”—ways to sway the gender of a baby. Those methods rely on environmental factors. In this case, that doesn’t mean like the sun and trees and such for the most part, but the environment of sperm and eggs, the human body. The environmental factors currently supported by research include intercourse timing, maternal diet, fertility, age, hormone levels, and overall health. These factors don’t affect the ratio of x to y sperm, instead they affect the probability of an x or y sperm reaching and penetrating the egg.

The vast majority of supported methods all relate to a single theory—Trivers Willard Theory. Triver Willard’s theory suggests that any factor that stresses the body increases the chance of a female offspring. Why?

It turns out women aren’t the weaker sex. Males have both a higher fatality rate in utero and out of it (having a lower chance of reaching reproductive age) so when the body believes times are tough, it produces a better bet for a continuation of the species—girls. This means being in better overall health via things like exercise, healthy diet, low stress, proper sleep, and a warm comfortable environment will influence the probability of a Y sperm getting the egg. Researchers suggest this may be through a mechanism of alterations in the protective layer surrounding the egg. The Trivers Willard Theory is even supported by relationship health! Women who are happy and secure in their relationships statistically have more boys. 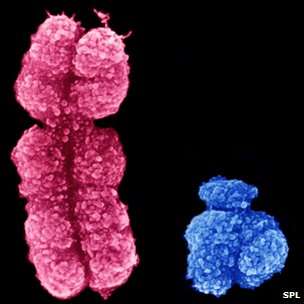 While many have suggested intercourse timing within the menstrual cycle will affect gender probability, there is no research to support this suggestion. It is possible that timing during more fertile periods would play into the Trivers-Willard Theory by improving sperm health, because cervical mucus is more caustic to sperm during non-fertile times (thicker, stickier, with a less ideal pH.) However, in regards to timing there is a supported theory. Research shows that babies conceived in colder conditions have a higher incidence of female infants. Keep in mind this is only a marginal change. For everyone 1 degree temperature increase 1 more unexpected son was born per 1000 female births. This suggests conception during the colder months may result in a better chance of a girl, whereas conception in the warmer months would slightly sway boy. Notions that the moon phase may affect gender ratios have also been made, but there is no research to support this either.

How to conceive a boy: Aim for conception during warm months at peak fertility.

How to conceive a girl: Do the deed during the colder months at the beginning or end of the fertile window.

According to the Trivers-Willard Theory, eating a high-calorie, high-nutrient diet sways the gender ratio towards boys. While a low-fat, low-nutrient diet with skipped meals (breakfast in particular) tips the scale to girls. Outside of this, glucose levels have also been shown to affect gender ratios. Female sperm seem to thrive less within high-glucose environments, so diets that are high in carbs and sugars are likely to encourage boy offspring while more balanced blood sugar levels help the X bearers. Despite the fact that many nutrient-specific diets are often suggested, only potassium and sodium diets are supported by research. High potassium and sodium diets seem to favor boys and the opposite girls. Dietary changes were capable of increasing the rate of unexpected male offspring by 1 for every 20 births (making it a more powerful factor than temperature).

How to conceive a boy: Eat a nutrient rich healthy diet (particularly potassium and sodium) with high carbs.

How to conceive a girl: Eat a low nutrient diet with empty calories, low sugar, and limited carbs while skipping breakfast.

I know, you’re probably expecting me to cite Trivers-Willard again and tell you exercise sways to boys, right? Nope. Exercise actually can work in favor of girl conception because while exercise will improve your overall health, it also burns calories and helps balance blood sugar, and as we just learned higher caloric intake and blood sugar sways boy—at least that’s the case in high-aerobic exercise. Strength training or forms of exercise that don’t burn a ton of calories tend to just improve health helping the Y side. Though those hoping to conceive girls have to be wary, lowering caloric intake too much will actually cease ovulation, eliminating the chance of any conception.

How to conceive a boy: Limit aerobics and stick to strength training or low-caloric burn exercise.

How to conceive a girl: Engage in frequent high-caloric burn exercises such as distance running. 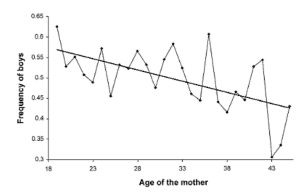 Every year in maternal age decreases the chance of a son by 1.2%. For example, the percentage of teen mothers whose first born is male ranges around 75%, but the percentage of women over 35 whose first born is male is only around 25%. While the exact reason maternal age seems to strongly affect gender determination is unknown, it’s like tied to—you guessed it—Trivers Willard Theory. We are indeed in our best health in our youth in most cases. This correlation is not seen in paternal age. Additionally, some psychologists suggest it may be a result of the time investment of son versus daughters with older parents having less time to invest in their child before death.

How to conceive a boy: Conceive young.

How to conceive a girl: Wait until you’re older.

Finally, basically anything that reduces fertility seems to correlate to higher ratio of female births, which is even more support for the Trivers Willard Theory being fertility and health are undeniably connected. This could include poor diet, very low or high body fat ratio, hormonal imbalances that alter the menstrual cycle, illness, low sperm count, certain medications, alcohol, tobacco or drug use, and environmental hazard exposure.

Wives tales in regards to gender determination are plentiful and include innocent and harmless ideas such as placing an outfit from the gender you desire under your bed to more potentially dangerous ideas like douching mixes of various substances before intercourse.  While some of these myths certainly can’t hurt, others can, so it’s recommended you only throw in unsupported methods if there is no way they could be harmful to you.

As you can see from the limited information above, there are not very many proven factors to gender ratio swaying, and the vast majority of those rely on a single theory. Realistically, when it comes down to it every conception has a chance of about 50% no matter what is done, excluding…

High-tech methods of gender determination DO significantly alter the gender ratio as, well, they are designed to do so. The desire of multiple-same gender parents to have a child of their choosing has led to a multi-million dollar industry including techniques such as IVF with PGD (preimplantation genetic diagnosis) or sperm sorting. Coincidentally, even IVF without intentional gender selection has been shown to sway the gender ratio, some methods quite dramatically. One method alters the ratio from 105 boys to every 100 girls to 128 boys for every 100 girls. Another 94 boys for every 100 girls. Most methods seem to favor male offspring though. Some worry this may eventually tip the worldwide gender ratio as IVF grows in popularity.

Notes on Infant fatality and the gender ratio

Considering the above I was able to have a girl after 3 boys! You can read about what I did in particular here.