If your child lost their fingernails after a hand, foot, and mouth infection (you can read about this weird side effect here), there’s a fair chance you’d like those nails to grow back as quickly as possible. Heck, even if your child just has a broken nail or you want healthier, longer, stronger nails yourself, how to grow nails fast is excellent information to have. Unfortunately, many of the nail growth tips you’ll find online don’t come with any reputable sources. We do our best below to cover ways to make nails grow faster that are supported by evidence below. 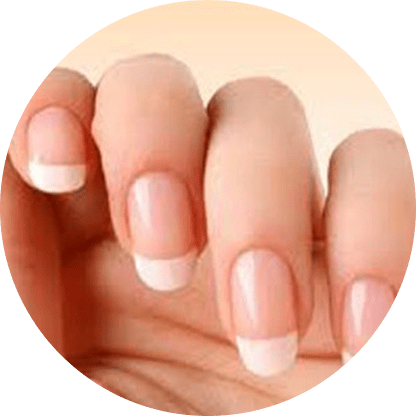 When trying to understand how to grow nail fast, it helps to know…

How fast do nails grow, and what can affect that rate?

Fingernails grow at a rate of roughly 1.5 to 4.5 mm per month. To put that in perspective, your average short-grain rice is about 5.5 mm long.

Nail growth rate varies depending on a number of factors including:

-Age: Newborn nails grow the fastest at roughly .15 mm per day (4.5 mm per month). This rate remains relatively the same forgoing other circumstances until around age 20 when it begins to decline steadily.

-Pregnancy/Hormone levels: High levels of estrogen lasting more than 4 months can increase nail growth. This is common in pregnancy, with hormonal birth control use, and in hormone-replacement therapy. Likewise, after menopause when estrogen levels are low, brittle, slow growing nails are common.

-Trauma: Any sort of trauma to the nail bed can slow nail growth, even if the injury has healed if there is lasting damage such as scaring.

-Frequency of use: The fingernails on your dominant hand grow slightly faster. While it’s not clear exactly why this is, some suggest it may be a result of the pressure on the nails from more frequent use. The theory is that fingers that are used more signal the nail bed to increase growth because they’re more likely to be worn down by that use. For instance, it’s been shown that if an injured finger is splinted (and so not being used) the nail will grow as much as 25 percent slower than the in-use fingers on the same hand.

To further support this, individual fingers also have different growth rates. Your pinky is the slowest growing nail, followed by your thumb, and your middle is the fastest, seconded by your index finger. If you think of how you use your hands in everyday life, this corresponds for most to the most frequently used (or not used) fingers in such a way that the nail is going to be hit or feel pressure.

Studies also show that nail-biting and clipping likewise increase nail growth rates. All of the above suggests that more frequent trauma to nails (but not enough to cause injury) may increase the rate of nail growth.

How long does it take to grow an entire nail back?

As you can imagine from the information above, that’s going to depend on quite a few factors, but for most between 2 and 6 months. This assumes the entire nail has been lost. In cases of shed nails after hand, foot, and mouth (the inspiration for this page), that shedding is caused by the gap created by the virus being pushed out by nail growth. If you wanted to get a rough estimate, you could measure the missing nail, then divide that by 1.5 mm. This would give you a ballpark for the slow-end in months.

All that being said, we can finally get to how to grow nails fast using this information.

-Keep your hands warm and well moisturized to keep your nails from becoming brittle. You may find oil-based moisturizers such as vitamin E oil massaged into the nail and cuticles more effective than lotion in this department. The pressure of the massage may also help encourage growth via the idea of frequency of use mentioned earlier on this page.

-Have regular physicals to check for hormonal imbalances and/or undiscovered chronic illnesses. Some health conditions, such as thyroid disorders, can cause hard-to-catch symptoms. The best way to catch underlying health issues is to have regular preventive health checks.

In fact, there are only two supplements that have research to support they have any effect on nail health. The first, biotin has more support than the second, collagen. In a 2017 study, which lacked a control group, collagen supplementation increased nail growth by 12 percent. Biotin has been shown (study 1, 2, 3, 4) to strengthen brittle nails rather than increase growth. Preventing breakage is one way to help nails seem to grow faster though.

-Stay active. Finally, while activities that are likely to break nails probably should be avoided, things like exercise that improve circulation are great for nail growth.

Unfortunately, as you can see not much can be done to make nails grow faster, especially in children, but what little you can do is easy to implement.

What do you swear by for improved nail growth?