Just for a bit of defining and trivia sake, eggnog is a cream or milk-based drink made with egg yolks, sugar, and spices. The word eggnog literally means “egg in cup” derived from the word “noggin” which is a small wooden cup usually used for strong ale.  Just why eggnog is so popular during the winter holiday season is a bit of a mystery as no one seems to know for sure. However, it may be due to eggnog’s historic tradition of being used to toast good health. Being that winter is commonly the cold and flu season, it would make sense that a drink made to bring good health would become popular during this time. This theory as to why we drink eggnog at Christmas is also supported by the fact that eggnog evolved from a British drink called Posset. Posset was traditionally a winter time beverage that was thought to cure a cold.

For good health or not, eggnog makes the perfect holiday drink to bring cheer to all tummies. While eggnog is not always alcoholic, rum is commonly added.

OK, trivia and history aside, let’s get the the point, how to make eggnog. There are a lot of recipes out there to answer that one, so this page on how to make eggnog will teach you how to make a basic eggnog recipe as well as a few tips to create variants. 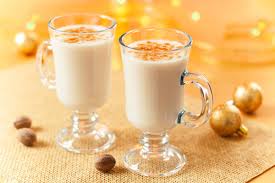 How to Make Eggnog:

*6 eggs, separated into yolks and whites

For the Cooked Egg Version:

It should be noted that the American Egg Board cautions against drinking eggnog with raw eggs, especially those who are pregnant, have compromised immune systems, or are very young, as it poses a risk for bacterial infections such as Salmonella. As an alternative these instructions on how to make eggnog will include the cooked-egg variant, however, you can also use pasteurized eggs or an egg substitute. Egg substitutes can also be used to lower fat content in this recipe.

How to Make Eggnog with Raw Egg


*Beat the six egg yolks with 1/2 cup of sugar using a mixer until a pale yellow is established.

*In a separate bowl, beat the six egg whites with the remaining sugar until it begins to firm.

*Mix cream and milk, and then add to egg-yolk mixture.

*Add vanilla or cinnamon to flavor, if desired. (A little goes a long way)

*Refrigerate for about 24 hours.

*Shake before serving. Sprinkle with nutmeg as garnish.

Note: If you choose to use egg substitute or pasteurized eggs rather than regular eggs, you can use this raw recipe and have all the safety of cooked eggnog.

How to Make Eggnog with Cooked Eggs


*Whisk all eggs together (not necessary to separate in cooked version) with all sugar until fluffy, then set aside.

*Over low heat, in a saucepan, cook milk and if desired vanilla and/or cinnamon to taste, stirring constantly. Remove just before mixture begins to boil.

*Return to saucepan over medium heat.

*Stir until a custard texture is acquired (mixture will stick to back of spoon). Never allow the mixture to boil, however, be sure it reaches at least 165 degrees.

*Refrigerate for about 24 hours.

*Sprinkle with nutmeg as garnish.

How to Make Eggnog Alcoholic (Either Version):

After you have refrigerated either eggnog mixture, simply add the desired amount of rum, brandy or bourbon and mix well. How much you add depends on your own personal taste as well as whether you put in all three types of alcohol or simply one. A common amount is one half cup of each or 1 1/2 cups of a single type.

If you chose to serve your eggnog warm, add the alcohol while mixing in the heavy cream, but keep in mind that adding alcohol to a hot mixer reduces it’s alcohol content.

Scroll back to top wpDiscuz