Whether you’re trying to become pregnant or hoping you aren’t, when it comes to end-of-cycle spotting or bleeding, you’re likely wondering: how do you tell: implantation bleeding or period? 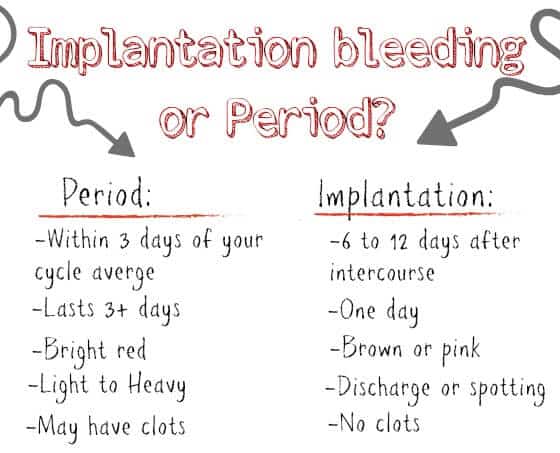 What is implantation bleeding?

Implantation bleeding is bleeding that occurs as a result of a fertilized egg implanting in the uterine wall. This bleeding is the first recognizable sign of pregnancy and does not occur in all cases.

What is menstrual bleeding?

While most women already know what a period is, just for knowledge’s sake, a menstrual cycle is on average 28 days in length but may vary from woman to woman. In this time, an egg should be released (about mid-way through your cycle). If the egg is fertilized, it implants in the uterine wall, and implantation bleeding may occur. Otherwise, the egg travels on and is shed with the uterine lining during your period. If you don’t release an egg, your period may be delayed, but you will likely still experience bleeding. Ovulation, or the release of this egg, can be confirmed by charting your basal body temperature.

Implantation bleeding or period? How can you tell?

When does implantation bleeding occur?

Implantation blood is usually a different color than your average menstrual blood being either darker and more brown (old blood) or lighter and pinkish (very new, light bleeding). Keep in mind that the implanting egg is the size of a pinhead. Implantation bleeding is very light and shorter in duration than your regular cycle—unless, of course, you don’t normally have one. It’s usually just the faintest pink showing up on toilet paper or even just one to two tiny spots of blood. Implantation will not cause heavy bleeding, but there are other ways one can be pregnant and still experience period-like bleeding.

Some women also get a slight hormone dip at implantation, which may cause both a temperature dip on basal body charts and possibly some light spotting. This type of bleeding is not a heavy flow.

How common is implantation bleeding?

Keep in mind that only about one in three women experience implantation bleeding. If you suspect pregnancy or have had unprotected sex, don’t assume that you’re not pregnant simply because you didn’t experience this symptom. Some women become pregnant and exhibit no symptoms what so ever.

If you are trying to decide between implantation bleeding or period, you may also enjoy:
How to Calculate Your Chances of Pregnancy (includes quiz)
Period blood colors and Textures
Early Signs of Pregnancy Quiz
Period While Pregnant: Is It Possible?

A note on comments: I usually respond to comments within 48 hours. All comments are moderated before they appear on the site to eliminate spam.  Each and every comment is responded to as approved, but please remember, I am not a doctor nor a replacement for medical care. I can’t possibly tell you if you are pregnant over the Internet. I do have a medical background (medical assisting) and am a mother of four who struggled with infertility as well as multiple miscarriages, but I am not a doctor nor claim to be one.