Intelligender is a urine-based gender prediction test touted to predict gender as early as 10 weeks. It takes 10 minutes, and does this all for a low price of about $37. The question then becomes, does Intelligender work? Are there any studies into Intelligender accuracy? Is it legit or just a sad monetary preying on the desperation of pregnant women to know the gender of their baby just a smidge early. I know as a mom who had a girl after three boys I would have loved to know that 4th baby’s gender 10 weeks before my gender ultrasound. So, let’s dig into Intelligender a bit. 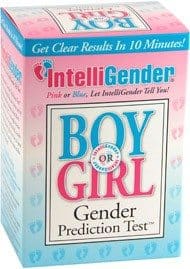 Intelligender’s site is a bit vague on what exactly it is. They simple state it’s a “proprietary” mix of chemicals that react with hormones in your urine. These chemicals lead the urine to change to either orange (it’s a girl) or green (it’s a boy.) Use of Intelligender is then as simple as peeing in a cup just like the pregnancy test you took to confirm your pregnancy.

Hormone levels do differ in ways based on the gender of your baby, we talk about this a bit in our piece on gender and pregnancy symptoms. However, while a study did show that in women pregnant with girls hCG levels are around 18 percent higher as early as 3 weeks, women pregnant with males still have hCG in their system. The researchers in the cited study even state that elevated hCG levels cannot reliably be used to predict gender. 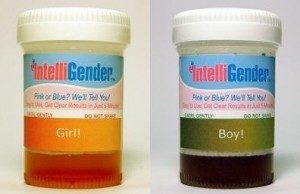 It’s also true that in male infants testosterone levels begin to rise more so than in female infants around week 7, peaking between weeks 9 to 11 to prompt external gender development, but even with blood sampling, these levels were only sufficient to detect gender in 28 percent of male pregnancies and 5 percent of female pregnancies with 95.5 percent accuracy—with a blood sample, not a urine dip stick.

This means that it is quite literally impossible based on well, science, that Intelligender actually works. So, why are there so many women saying it worked for them? Probability. Everyone has a roughly 50/50 shot at a girl or a boy. This means Intelligender will be right at least 50 percent of the time just by sheer coincidence. It’s nice they at least state on their website that Intelligender may not predict gender with 100 percent accuracy—hah, I’d say so.

So, should you try Intelligender?

There’s no risk to trying Intelligender or others like it minus spending a little less then $40. If you want to do that for funsies, I suppose it’s no different than the commonly suggested Chinese birth chart or swinging a needle. Just keep the notes on accuracy you’ve learned here today in mind.

You may also enjoy our gender determination quiz based on the science of gender swaying.