We’re driving down the road, rocking out to some kid-appropriate beats, headed for the park on a sunny afternoon. And suddenly, a tiny blond head pokes up beside me. I knee-jerk swerve to the side of the road, causing said golden noggin’-ed toddler to go flinging into the front seat beside me. That was the first time my son unbuckled his own seat belt, and, unfortunately, it wasn’t the last. 51 percent of childr 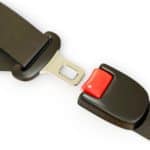 en can unbuckle themselves. 75 percent of those kids are toddlers. 100% of parents aren’t thrilled about that while driving. Don’t worry though, we have some simple suggestions to keep your child from unbuckling.

How to you stop a child from unbuckling their seat belt or car seat straps?

In light of those 51 percent of children who at some point unbuckled their own straps while their parents were driving, it’s no surprise that there are actually anti-seat belt removal products available.

Seat belt buckle guards: These simple plastic covers fit over your seat belt’s buckle, making it impossible for the release button to be pressed. You can get different versions to fit the various buckles on different vehicles.

Seat belt removal alarms: This small attachment lets off an annoying sound when the seat belt is unbuckled. They work both to alert you that your child is escaping, and to scare younger children into stopping what they’re doing. Some previous versions of this have been discontinued, but there is a new model out now. If you have a car-seat-aged escape artist, there are also smart car seats these days that do the same thing.

Strap clips and other hints: You can also purchase clips that hold the front straps close to your child’s neck in the case of car seats so they can’t simply slip out of the car seat without unbuckling. If you have a child who is making a habit of escaping from their seat, and you don’t already have a 5-point harness cart seat, it’s recommended you switch over. Five-point car seats offer more straps that prevent that little wiggling out routine many kids do.

On top of just making escape nigh impossible, it also helps to distract from the desire to escape. In addition, a busy child in the car is far quieter than a bored child in the car.

Magic markers: Crayola makes marker kits that will write only on the special paper that comes with the kit. Personally, I feel the paper is too expensive for regular in-home use; however, for a car trip, keeping a clipboard version works well to keep kids busy drawing. As the markers only work on the special paper, your child can’t draw on the windows, seats and ceiling of your vehicle while you are predisposed driving and can’t stop them either.

Bubbles: You can find small no-spill bubble kits for a few dollars in most department stores. I have yet to find a kid who isn’t entertained by bubbles. The no-spill means no mess, and as most little are less than adept at bubble blowing, generally they spend more time working on blowing a few bubbles than actually blowing any, so your car likely won’t be covered in soap. Older kids particularly enjoy letting them fly out the window.

Travel games: Magnet-based simple games like chess or shoots and ladders can also be a great distraction if you have a multi-kid car. Alternately, you can try playing games with your kids while you drive such as I Spy. Most typical road trip games can be altered to fit various developmental levels, and even teach things such as colors, numbers, and shapes in the process.

Tablets: Usually, I try to avoid recommending electronics for kids, but on any road trip longer than 10 minutes or so, a cheap tablet with some educational games does wonders for all ages. I’m particularly found of Amazon’s Kindle fire. You can get the basic version with offers for about $50 (though there are frequent sales), throw the case of your choice on there, and your seat belt worries will likely be over.

Car toys: The above are just a few ideas that worked well for my children. What will work for you will really depend on your child. Some kids love toys trucks, others like coloring. Find a toy your child can play with for 10-15 minutes without becoming bored, and make it a “car toy.” This means your toddler only gets to use the toy while in the car, and won’t likely tire of it. It is a good idea, however, to change out your “car toy” every now and then.

Have an idea  not on our list? We’d love to hear your tips in the comments section for keeping kids from unbuckling their seat belt as well!