While leaving your child in the car for a moment is often a legal and moral conundrum in itself, the heat wave hitting the nation has added a new safety factor to the equation. Honestly, living in Alaska where typical weather does not top 70 degrees Fahrenheit or so, there have indeed been times that I have left a sleeping child in my car while stepping out to use a port-a-potty or run into a convenience store where I could see them through the glass. In areas such as mine that are now seeing record highs residents just aren’t used to, the dangers of leaving an child in a car even for a short time may be unknown. 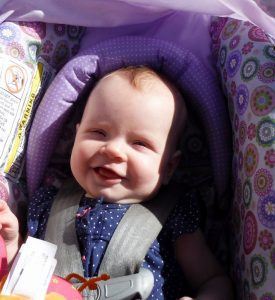 On average 37 children die of heat stroke or heat exhaustion in hot cars each year, with a total of 669 since 1998. The vast majority of those children– 97 percent–are under the age of 5 with 74 percent being younger than age 3.

How hot can a car get, and when does heat stroke become an concern?

A human being can suffer from heat stroke and die once the surrounding temperature reaches 104 degrees Fahrenheit. A child is more susceptible to heat stroke, because his/her central nervous system (which acts to cool the body in extreme heat) is not fully developed. A study from San Francisco State University found that in temperatures between 72 and 96 degrees a car will increase in heat by approximately 19 degrees in 10 minutes, 29 degrees in 20 minutes, 34 degrees in 30 minutes, and 43 degrees in an hour. That means on a sunny 80 degree day, it may take 20 minutes for a car’s interior to reach lethal temperatures, but in 100 degree heat, it would take mere minutes. The color of the vehicle’s interior may affect this rate. Numerous studies have shown cracking the windows to have little to no effect. In addition, interior temperatures don’t increase at a steady rate either, rather they vary with the external temperature and rate at which the surfaces of the car absorb radiation.

What do you need to know about vehicular heat stroke?

To put it frankly, never leave your child alone in the car. If you absolutely must, leave the car and air-conditioning running and be as quick as possible. That being said, the majority of heat stroke deaths in children are not a result of parents intentionally leaving them in the car. In fact, only 17% are, while 54% are a result of children that were simply forgotten in the car, another 29% were playing in an unattended vehicle, and the remaining 1% are unknown. It’s easy to say, “Oh, I’d never forget my child,” but parenthood can be hectic. It can and does happen– even to parents who said, “I’d never..”  It may help to always bring your child in first before groceries, your purse, etc (even if they are napping), refrain from answering calls or texts until you and your child are inside, and talk to your child often while driving.

To keep your child from sneaking into your car unattended, always keep your doors locked and your keys out of reach. You might also try some efforts to prevent toddler escapes.

Next, know the symptoms of heat stroke. These include dizziness, confusion, agitation, an overall sluggish appearance, dry, flushed skin without sweat that is hot to the touch, rapid heartbeat, hallucinations, seizure, and finally unconsciousness. In younger children, such as infants, some of these signs may be hard to spot.

If you suspect your child may be suffering from heat stroke, seek medical help immediately and make efforts to cool their body temperature. This may include removing clothing, applying cool water to the skin, offering cold drinks, cranking the AC, and so on.

Of course, heat stroke can happen outside of cars too. Remember to dress your child accordingly, use sunscreen, stay hydrated, and when not in the car, find cool places to escape the heat as often as possible. Avoiding strenuous activity in peak-heat hours is also recommended.

It’s hot outside, be safe.