When your baby goes from crying to communicating with actual words is a proud and useful milestone in the memory book, but what do you do if that milestone is delayed? When is a baby’s speech development considered delayed? At six months one of our sons had only-recognizable-to-those-closest to him words, but at nearly a year old his brother rarely and only quietly expressed even the tiniest of verbal communication such as “up.” The question then became, did one of our children have a language delay? The answer was in the baby speech development timeline. 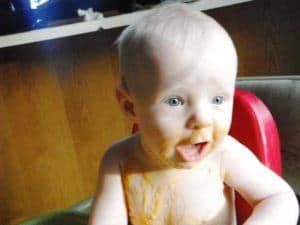 How does baby speech develop?

Baby speech development begins before your baby is even born. Research shows that in the final 10 weeks of pregnancy your baby hears you and takes the first step in developing speech– listening. This is why newborn tend to be comforted more by familiar voices and will respond better to speech in their native language. This absorption of language sounds continues and soon your baby forms the connection that sound can express wants, a lesson which is well reinforced in the early months by frequent screaming.

Later, your baby begins to connect where sounds are coming from and make sounds that more closely recognize speech. Making the following common between 4 and 6 months of age:

-looking in the direction of noises
-babbling including letters sounds
-listening to music
-laughing
-cooing, gurgling, or making sounds to express different emotions

Finally, random letter sounds lead to imitation as your baby begins to mimic sounds and form actual words. Between 6 and 12 months most infants begin:

So, when should your baby start talking?

It turns out neither of our sons had a language delay. As the baby speech development timeline above is variable,  language skills are not considered delayed unless no recognizable words whatsoever are said by 15 month of life. Concerns over language delay like mine are common, but often misdiagnosed. Having a child that’s slow to talk is also not a reflection on you. As long as you are talking to your baby often and giving her/him the chance to hear language, you’re doing just fine. Every baby is just different. Often a baby that lags behind in one developmental area may excel in another.

What should you do if you suspect a language delay?

First, there are some cues your child may have an underlying developmental issue prior to that 15 month cut-off.

Warnings of an infant language delay include:

-Doesn’t make eye contact or attempt to communicate with you or suddenly stops doing so at any point.

-Doesn’t use gestures as non-verbal forms of communication by 12 months of age.

-Doesn’t try to imitate sounds he or she hears often by 12 months of age.

If your baby isn’t doing any of the above, it’s a good idea to speak with your pediatrician to confirm a language delay, try to figure out what’s causing it, and help your child get back on track.

Common causes of language delay in infants include:

-Speech disorders such as Apraxia of speech

Many of the above are correctable or at the least their effects on language can be minimized if caught early on.