A late period, irregular period, missed period, or worse, missed periods can all be pretty concerning—with pregnancy being the main concern for most. After all, a baby is a colossal life change. However, many, many things can cause an irregular, late, or missed period. All of the above menstrual irregularities do have one thing in common though. They are all caused by hormonal imbalance or fluctuations. On the downside, this also makes discerning which underlying cause is behind the hormonal changes difficult—if it can be done at all. In any case, a trained medical professional—not Dr. Google—is the best person to ask. Clinics such as Planned Parenthood can be a low-cost option for professional advice. In the meantime below is a general list of common causes behind a late period, irregular period, or missed period.

First, early or late periods can be normal, so what is normal?

Normal hormonal fluctuation: It is perfectly normal for your cycle to fluctuate within a few days over time, in general, 3 to 4 days flux at the start or end of your period is nothing to be concerned by. Your menstrual cycle is controlled by a number of sex hormones: estrogen, progesterone, luteinizing hormone (LH), and follicular stimulating hormone (FSH). Levels for each have a range of normal which can cause a slightly shorter or longer cycle. For most, a cycle between 21 and 35 days with bleeding for 2 to 7 days is normal, but to determine what’s normal for you, you would need to chart your cycles for some time.

For example, if you had been charting and your average cycle was 21-24 days with active bleeding 1 to 3 days, and you suddenly started having cycles of 35 days with 7 days bleeding, while in “normal range,” this would indicate something in your personal hormone balance shifted outside normal range for you and you may want to explore why. In contrast, if your normal cycle was 30 to 32 days, a shift to 35 days one month is more than likely a normal fluctuation without an underlying concern.

Spotting is also considered normal shortly before and after your period. Mid-cycle spotting is questionable. Some women do experience spotting at ovulation, which would be considered normal, but low progesterone levels can also cause spotting as well as the short and frequent variety of an irregular period. Progesterone maintains and thickens the uterine lining for pregnancy. It’s fall and the rise of estrogen is actually what causes your period to begin. This is why low levels can cause abnormal mid-cycle spotting. If you aren’t trying to conceive, birth control is one of the most commonly prescribed methods of fixing symptoms caused be imbalances in sex hormones. If you are TTC, I highly recommend giving the herb Vitex try. While slow acting, it’s often effective. 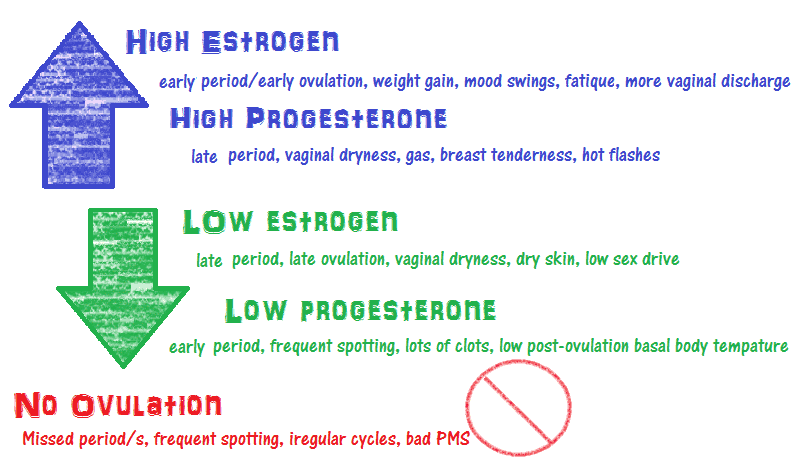 One of the most common causes of early or late periods is late or early ovulation. During the beginning of your cycle, FSH prompts the development of an egg. Once complete, this egg triggers the production of estrogen. When estrogen reaches sufficient levels LH is released, which causes ovulation. Ovulation triggers progesterone levels to rise which remain high for 12 to 14 days. If you become pregnant, these levels remain high. If you don’t, they fall as the egg “dies” so to speak, and you get a period. It’s all rather like dominoes. If one domino is spaced too far or gets bumped too soon, you’ll have an irregularly short or long period. For example, low estrogen may cause you to ovulate late in your cycle resulting in a later period (because the progesterone phase will remain the same length), while high estrogen may cause you to ovulate early, creating an early period. High progesterone may cause a long final phase causing a late period, and low progesterone may cause a short final phase/early period.

An absence of ovulation altogether, a missing domino, usually causes more pronounced irregular periods. A lack of ovulation is the sort of thing that causes more than one perceived missed period without pregnancy. The reality is it is one very long cycle.

Anovulatory cycles can be caused by:
-an inability to produce a mature egg, either by low FSH or low egg reserve (you are born with a set number of immature eggs)
-luteinizing-hormone defects which prevent the egg from releasing
-ovarian defects such as cysts (which can also be caused by eggs that fail to release)

You’ll find a full in-depth look at the many causes of these issues on our page about anovulatory cycles.

If you don’t ovulate, nothing triggers progesterone to rise. In this case, estrogen eventually fails to maintain the lining it has been developing or you ovulate very, very late, and you have bleeding. This bleeding may occur before your period was due, on time, or far after depending on your own estrogen levels. Consistent lack of ovulation can create prolonged absence of menstruation, frequent periods, or very irregular periods with or without spotting.

OK, that was a lot to take in I know, so if you’re still with me, what can cause all these sex hormone changes?

Any lifestyle change can prompt a difference in your hormone balance. Common culprits are weight gain or loss (exercise levels being a big factor), dietary changes, stress, illness, and lack of sleep. In many cases, simply allowing your body time to adjust to these changes is sufficient to regain hormone balance, unless the change is unhealthy and the body is unable to balance. (ex/ exceptionally low body-fat content) One of the first steps you should take if you are having an irregular period is to stop and think, has anything changed in my life?

Second, medications can alter sex-hormone balance. Particularly those containing estrogen or progesterone or that have an effect on these hormones. Again, this would be something that you began taking shortly before the irregular or missed period occurred.

An absence of periods while breastfeeding is entirely normal. You may also experience irregularities. As this is an in-depth topic, and this page is already over 1,000 words, you can read more about breastfeeding periods here.

As most know pregnancy can halt menstruation, but there are also situations where bleeding may continue, but irregularly. You can read more about bleeding like a period while pregnant here.

As mentioned earlier you are born with all the eggs you’ll ever have, as you age this reservoir depletes and you will eventually cease menstruation. This is most common after age 35, so if you experience a late, irregular or missed period and are close to this age, it may be a possible cause.

Finally, there are medical conditions which can affect your menstrual cycle. Things such as tumors, cysts, and thyroid deficiencies are members of an expansive list. This is why if you experience prolonged cycle irregularities, its best to see a medical professional. You’re looking for a trend of abnormal bleeding (or lack thereof) for you, not just one weird month.

I’ve done my best to cover common causes of late periods, irregular periods, or a missed period here, but if you have additional questions feel free to drop me a comment. I usually respond within 48 hours. Please keep in mind I am not a doctor nor adequate replacement for one.

You may also find relevant: