It’s hard to properly describe what shopping during dip-netting season in Alaska is like, but it’s sort of like rush-hour traffic for grocery stores. There’s a gazillion people who need a gajillion things. All of them are in a hurry, and none of them have any patience—or the polite manners that go with it—left. As you can imagine, then, taking four children into a store during this time is putting your sanity in a blender. I did it anyway. Then I got to my car only to find the cashier had made a mistake. I unloaded my groceries and my kids—ages 9, 7, 5 and 2—and ran back in to have the error fixed.

It was an overcast day, not too cold, not too hot, and I knew it would only take a moment. My receipts were an impressed 11 minutes apart, car and kid loading included, but none the less, I emerged from the store to find the police had been called by “concerned” shoppers who were still there to inform me how bad my parenting skills were. 11 minutes. Luckily, nothing came of this story, because in Alaska, like most states, there is no law designating what age a child needs to be to be left unattended in a car. It does, however, bring up an important question, when is it OK to leave your kids in the car alone? 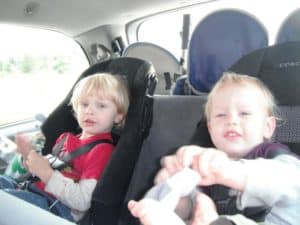 What does the law say?

The law on this matter varies greatly from state to state. Some have no laws at all like Alaska. Those that do state an age to be left alone in the car range from age 6 to 16! Many specify that conditions must be present that pose a risk to the child such as extreme weather for this to apply. The age of appropriate supervision for kids under the age requirement also ranges quite a bit from 9 to 14.

The most common age given, just for rough idea sake, is age 6 or supervised by someone over the age of 12.

You can check the law in your state here.

What if there’s no law in your state, when can you leave a kid alone in the car?

Your child’s maturity level should be your first consideration.

Can your child unbuckle on their own? Can they communicate their needs in such a way anyone (should help be needed) can understand? If your child was sick, could he/she recognize this? When left unsupervised at home (like when you’re in the bathroom) how does your child behave?

For many this list would exclude infants and toddler entirely, and many preschoolers as well, making around age 6 actually a solid recommendation. As far as older kids keeping an eye on younger, that again plays into maturity. Say you have an 8 year old who has absolutely no self-control and likes to cause trouble—probably not a good candidate to be left alone in the car, but if you have a 5 year old who speaks clearly and is generally well-behaved when left unattended,  a few minutes would likely be fine.

What are the outside factors?

Second consideration, how long? How far away will you be? Can you see your kids from a window inside?
If you’re out of sight and ear shout, the shorter the duration the better. In general, for kids about 6 to 10, anything over 15 minutes isn’t recommended.  If you can see your child, age isn’t as important as long as the car is at a safe temperature and your child’s needs are met (fed, dry, etc.) you’re good.

This should be a no brainer I suppose, but if it’s very hot, very cold, or weather conditions may scare a child (storms) your child shouldn’t be left unattended, no matter the age. Even in states where there is no law, parents have been charged with endangerment for doing so—and rightly so. On average 37 children die of heat stroke after being left in cars each year. 97 percent of those deaths are in kids under 5 (another mark for around age 6 there.)

Summing it up, how old does a kid need to be to be left alone in the car?

Age 6 is a rough guild line, but your child’s maturity level should be considered.