Pregnancy is full of surprises, some of which can be a bit frightening. Towards the end of my first pregnancy, I began to notice lumps in my armpits. I suddenly realized I actually had what looked like armpit fat, so to speak, on both sides. They started small and slowly became larger. My immediate thought was the big C word– cancer. I was terrified, but I was also incorrect. While a lump in your armpit can be a sign of cancer, if it’s on both sides, especially while pregnant or breastfeeding, that’s not normally the case.

What were the lumps in my armpits during my pregnancy actually caused by? 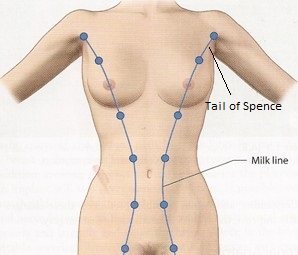 My mid-wife explained that breast tissue actually extends well beyond what we call the breast. Breast tissue can run all the way from the armpit to the crotch in two lines called milk ridges. In some cases, there is an unusual amount of breast tissue in the armpit or tail of spence. This tissue is called Hyperadenia, or the presence of excess breast tissue without a nipple. During late pregnancy as the breasts prepare to lactate, this tissue forms milk glands and enlarges like so many other things during pregnancy. This enlargement was my lumps.

What happened to the lumps after I had my baby?

The lumps engorged with the rest of my breast after I had my baby. They were painful, baseball sized, and very swollen. However, once engorgement passed they resided to their usual size and remained intact until I stopped breastfeeding. Once I had fully weaned my baby and my milk supply disappeared, so did the lumps. They were not seen again until my second pregnancy. I was told this was normal.

Unfortunately, during my fourth pregnancy my armpit lumps actually developed small nipples and dripped milk like tiny boobs (you can read about that here). After that pregnancy I was left with lumps even after I weaned my baby. It’s currently been 3 years, and they are still there. They aren’t huge, but do seem impervious to weight loss and exercise alike.

How can I tell excess breast tissue from cancer?

You should make your health care provider aware of any lumps in the breast area whether after reading this article it sounds as if you have excess breast tissue to you or not. Until then, some signs a lump may be cancerous include the lump being hard, firm, indiscrete, and/or unable to be manipulated or moved. If the lump is soft, can be seen easily and/or has a matching lump on the other breast, it likely is not cancer, but you should still have it checked.

What if after engorgement the lumps in my armpits still hurt?

In rare cases, this auxiliary tissue will produce milk and not drain while nursing. This trapped milk then causes pain, swelling, and even infection. This often means the mother will have to stop breastfeeding so that tissue can reside. Occasionally, the milk can be successfully pumped. In any case, you should see your health care provider.