If you find yourself with a negative pregnancy test but feel pregnant, you’re not alone. 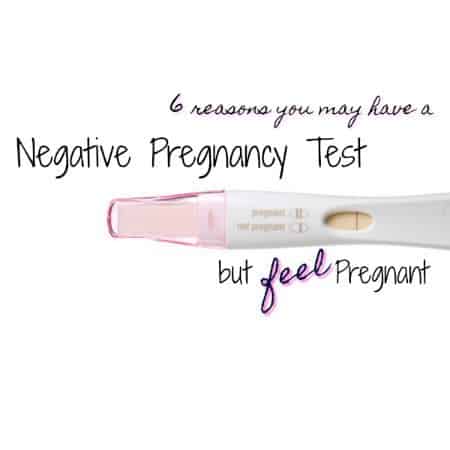 The net is riddled with forum posts presenting a range of variations of this situation all wondering if you can have a negative pregnancy test and still be pregnant. The answer is yes, but a word of realistic caution, excluding testing errors, it’s not common. So, how can you be pregnant but have a negative test? If you aren’t pregnant, why might you still feel pregnant?

The test was done too early.

Improper testing time is the most common cause of false negative pregnancy tests. With the high-marketing promises of early-result pregnancy tests, many women have been tricked into having unrealistically-high expectations as far as just how soon a pregnancy test is accurate. When you can take a test depends on a number of factors, including your cycle length, average ovulation, and more. As home pregnancy tests rely on hCG levels to detect pregnancy, and hCG rises very rapidly in early pregnancy, testing even a day too soon can lead to a negative result even if you are indeed pregnant.

If you’re unsure if you tested at the right time, you can read an in-depth guide along with statistics on when a pregnancy test is most accurate here.

While still technically an issue with early testing, in cases, hCG may not rise at the standard rate. In those cases, a test taken in accurate range may still come up negative. Unfortunately, there is no way to judge how quickly your hCG will rise in pregnancy, so there is no way to avoid this possible cause of a false negative pregnancy test.

Some pregnancy complications, such as ectopic pregnancy, can also cause a slow rise. This is an excellent example as to why you should see your health care provider if you have a negative pregnancy test but feel pregnant.

Something went wrong in the testing process.

The second most common cause of false negative pregnancy tests is testing error. This can include a range of issues such as:

All the above are why most pregnancy test instruction packets will recommend retesting no sooner than 48 hours later if you have a negative result. This not only greatly reduces the chance of an error as the probability of the same thing going wrong twice is low, but it also helps eliminate the chance that you tested too early.

The point that is often missed is that the hook effect is usually only seen with hCG levels over 500,000 mIU/mL —many sources quote an even higher level of 1,000,000 mIU/mL. To put that in perspective, the highest point in the generally accepted normal range for hCG in a singleton pregnancy occurs 9 to 13 weeks from your last period at 291,000 mIU/mL. In twins, levels show far more variation, but one study did put that rate at about 1.83 times higher than a singleton pregnancy on average. The hook effect is most often seen in molar pregnancies where hCG levels are not normal.

This means that in a healthy singleton pregnancy, the hook effect is very unlikely to result in a false negative test, and in a twin pregnancy the test would need to be taken several months into the pregnancy for that to change.

Higher than normal levels of hCG-βcf, a form of hCG that’s most prevalent between week 7 to 10 (gestational age 5 to 8), can also cause a hook-like effect in some test brands. Once this issue was discovered around 2009, however, many pregnancy test brands began changing their tests to prevent this error, including First Response and Clearblue, two of the most common test types. Below is a sampling of popular brands tested by the Department of Pathology and Immunology of the Washington University School of Medicine. The white bar represents test results with intact hCG, while the black represents intact hCG mixed with hCG-βcf, and the grey bar is hCG-βcf only. All the tests except the two marked “modified” are before changes were made to detect hCG-βcf. The two modified tests are after changes were made. 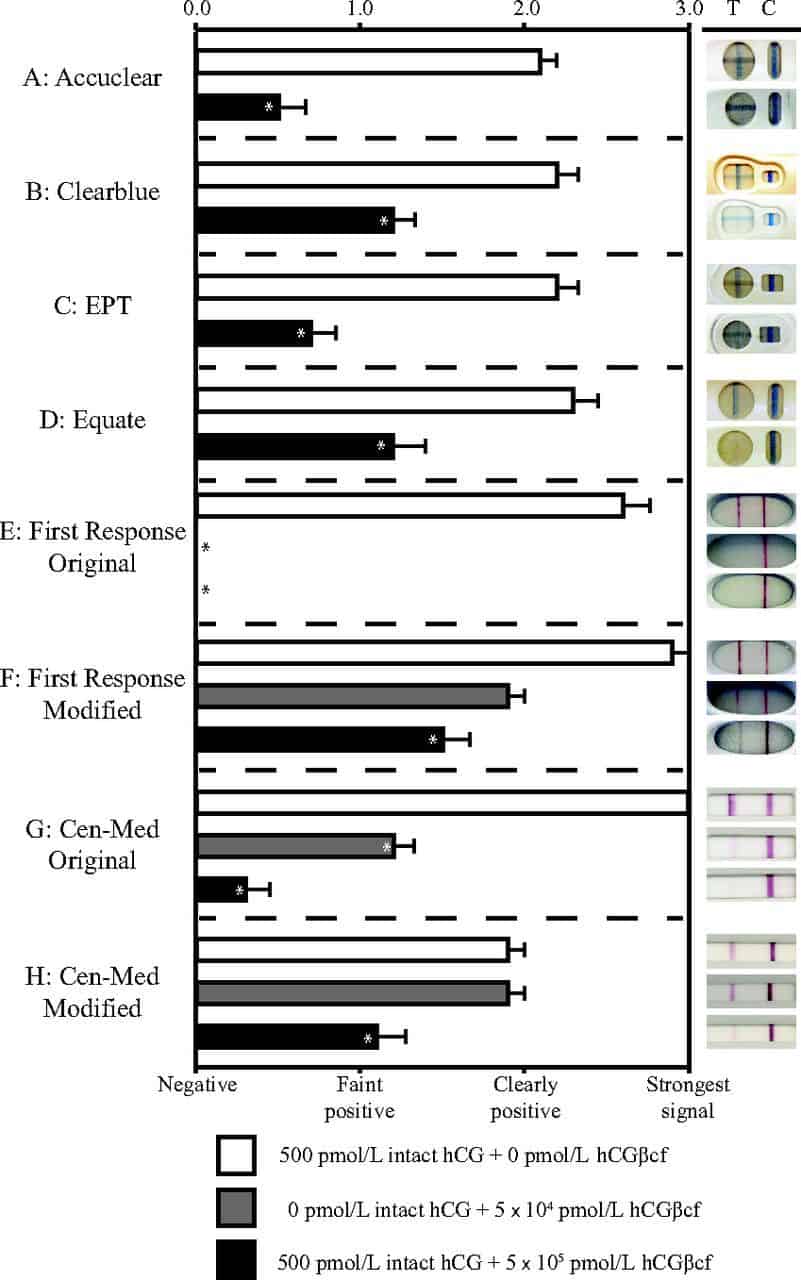 Though, hCG-βcf can still interfere with the correct estimation of ‘week’ with Clearblue’s Week Estimator tests. This could be one explanation for why those tests sometimes back track (as is a common scare for those suspecting miscarriage). Even before these changes, this, much like the high-concentration hCG hook effect, was not common. One review of 11,760 ER pregnancy tests in 2013, for example, found only 22 incidents of false negatives as a result of high hCG-βcf, being 0.19 percent of cases.

Now that we’ve looked at ways you can have a negative pregnancy test but still be pregnant, let’s look at the alternative, how can you have a negative test but feel pregnant even when you aren’t?

You have high progesterone.

Progesterone is secreted by the corpus luteum, a structure formed from the burst follicle after you ovulate. Its purpose is to maintain the uterine lining for a possible pregnancy, and its levels in non-pregnant women are at their highest just before a period. Those levels just increase in pregnancy.

High levels of progesterone can mimic pregnancy symptoms as a result and may cause you to feel pregnant even if you aren’t. While this can be indicative of some form of hormonal imbalance, the occasional high progesterone cycle is normal. Some of those forms of hormonal imbalance, such as PCOS, can also lead to anovulatory cycles which can lead to seemingly missed periods.

You’re suffering from the power of belief.

Finally, while pseudocyesis is more common in dogs and cats as far as full-blown pregnancy symptoms—enlarged uterus and milk production and all—it does also happen in humans where it is more commonly referred to as phantom or false pregnancy. Medically documented cases of this phenomenon are rare, and usually occur in cases of severe mental stress (for instance, the loss of a child), however, lesser cases that wouldn’t warrant an actual diagnosis are more common.

In short, if you believe you’re pregnant with enough conviction, you just might start to feel pregnant. In other cases, women just notice normal symptoms of their menstrual cycle more and mistake them for pregnancy symptoms.

Whether you feel pregnant or not, it’s always a good idea to follow up a negative pregnancy test in 48+ hours. If your follow up is also negative, and you still feel pregnant, trust your instincts and see a health care provider. Be sure to let them know you have already taken two home urine tests and would like to confirm via blood testing.

Still have questions? Feel free to drop us a comment. We do our best to help.