While you’d think the tax cuts alone would encourage parents to wish for their new baby to come before the New Year, many aim for New Year’s day itself. This is likely because in most communities being the first baby of the New Year comes with fame — and gifts. That one lucky newborn is usually in the paper or on the news, and often the family receives some sort of gift package. Packages vary by area, but it’s often donations such as merchandise, baby goods, or gift certificates from local businesses who hope to make it in on that free advertising when their name appears in the news release on the baby. However, having a New Year’s baby comes with other suggested perks, even if your baby isn’t the very first to cross the cervix. 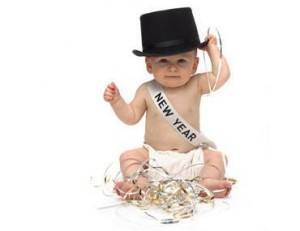 So, what’s up with the whole New Year’s baby stigma, anyway?

Outside of our competitive drive to be first, the concept of the New Year’s baby being an actual symbol of New Year’s is pretty old school. An infant has been a sign of rebirth since Ancient Egypt. Ancient Egypt was also the first civilization to associate this symbol with the New Year, and in the lap of a bearded man at that. In later times, that bearded man became “Father Time,” and the mythos that the child would age into an old man by December to hold a new baby in his lap arose. It’s easy to connect a new human life to the start of a new year; so this is perhaps why the tradition has passed through the ages to be depicted in silly cartoons in the modern world and warrant extra gifts and celebration to that first baby of the year — who luckily will not actually age faster than usual.

What other perks come with having a New Year’s baby?

On top of the gift basket and the publicity, there are a few superstitions surrounding those born on New Years.

— Babies born on the New Year are said to be lucky for life.

— The family of a New Year’s baby will have good luck that year.

— New Year’s babies won’t be visited by evil and can’t be drown or hung.

— A baby born on New Year’s is said to have great fertility and have a green thumb.

Of course none of the above outweighs the joy of a healthy baby. If you’re thinking about inducing simply to have a New Year’s baby, you may want to think twice. Inductions should never be performed without medical necessity.  Besides, many superstitions come with a clause that when the “lucky” task is forced, the luck doesn’t happen. For instance, looking for a four-leaf clover will make the clover unlucky if you find it.