Grinning ear-to-ear my toddler extended his finger to me revealing a glistening, gooey, fresh-picked booger. He then promptly shoved it in his mouth and ran away shrieking in amusement at my disgust. I’d love to say, “I have a boy. It’s normal,” but I’ve got bad news for parents of little girls. The more correct phrase would be, “I have a toddler. It’s normal.” Right up there with farting, spitting and poop painting, nose picking (and sometimes booger eating) ranks among the nastiest of toddler behaviors, even if it is normal.

Why do toddlers pick and then sometimes eat their boogers?

Nose picking is yet another result of the endless curiosity toddler’s exhibit. Some toddlers find their noses have holes accidentally and just start putting their fingers up there. Other toddlers discover things come out of noses when they have a cold or a stuffy nose from allergies and are intrigued by the gooey objects found. They continue doing it out of boredom mostly. 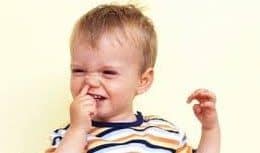 Some form a habit of it out of stress or nervousness, and others still do it because someone reacted in an interesting way when they did it the first time. Booger eating falls into this last category in most cases. Your toddler picks his/her nose, and that curiosity kicks in again asking, “Is that food?” and then your (or someone else’s) utterly and entirely disgusted reaction says, “Do it again! Do it again!” so your toddler does. This explains the gleeful shrieking victory run my toddler does after flaunting his new behavior.

What can you do to stop your toddler from nose picking and eating his/her boogers?

What not to do:

Just from the above explanation I’m sure the first “don’t do it” is clear, but don’t react if you can help it. Anytime your toddler picks or eats, just ignore it entirely. Pretend like you didn’t see a thing. Yes, this does mean don’t punish nose picking. Chances are your child doesn’t even know he/she is picking most of the time; it’s just a second nature of boredom. As a result, your toddler may not even realize why they’re in trouble and may decide this is a good boundary you’ve set to challenge on top of the any reaction is a good reaction mindset toddlers often have. Attempts to deter nose picking that are used in older children, such as putting stinky stuff like pickle juice on fingers or elastic band aids don’t generally work for toddlers either.

I’m sure you’re wondering if you can’t punish or even acknowledge nose picking, what should you do?

First, you can attempt to keep your child’s hands busy. A toddler who isn’t bored isn’t going to pick his/her nose out of boredom. It’s even better if your toddlers hands are busy playing with blocks, painting, or any other activity that his heavy on hand usage.

Second, you can try to keep the booger content in your toddler’s nose down. A humidifier can be helpful as well as teaching your toddler to properly blow their nose. The later is especially appealing to toddlers because it’s a new skill and one that mom and dad do too.

Lastly, if your toddler is picking excessively and may be causing bleeding you should speak to your pediatrician. It could be your child has an allergy causing nasal aggravation or some other underlying issue. On the topic of health, you’ll also be glad to know booger eating poses no health risks, even if it is disgusting.