What are the odds of getting pregnant? The probability of pregnancy is a common concern for both those trying and trying not to conceive, and unfortunately, that’s not a simple question.  Worse, most folks don’t want just a “not likely” or “probably.” They want a number—a statistical chance of pregnancy. Here at Life with Gremlins, we have a page explaining the basics of how to get an idea of your odds of getting pregnant. We even have a quiz that will give you an answer on a continuum from no chance to high, but in an effort to give you that specific number you’re looking for, now we’re going to delve into the complicated world of conception statistics.

Where to start? Well, how about when you did, intercourse timing.

Odds of getting pregnant by intercourse timing:

The fertility window is from 5 days before ovulation up to ovulation itself. It’s important to note this is based on the fact that while most studies agree sperm remain viable up to 5 days (but are most viable in the first 48 hours), research on the egg’s survival range is more conflicting. The mean viability of an egg is generally accepted at 12 hours (the point where in 50 percent of cases, the egg is still viable). However, on the early side, an egg may only survive mere hours, and on the late—and longshot— a rare egg may make it a full 48.

The most complete study done on the odds of getting pregnant on any given day was done in 2013 and published in the Oxford Journal of Human Reproduction. While its findings ran similar to others done on the topic, it was the first to counter in maternal age, cycle regularity, and ethnicity. It presented two sets of data. One simply factored in cycle day and ignored ovulation date. The other was based on the probability of pregnancy depending on when in the fertile window intercourse was. I know, this seems quite confusing. For example, one graph shows that the maximum chance of pregnancy occurs on day 15 at 13.1 percent. However, the other graph shows a maximum chance of 36 percent on the day of ovulation.

The second, much higher statistic, is guaranteeing the sex occurred in a fertile period. So, with data set one, the percentage is skewed by the chance that sex didn’t occur during a fertile time. For example, a woman has a condom break on day 15 of her cycle. There is a 13.1 percent chance that she is both fertile and will become pregnant. Now, assume that she knows she also ovulated that day. There’s just a 36 percent chance of pregnancy—we already know she’s fertile.

Why am I giving you both?

Data set one is going to be most useful to those who aren’t really trying to conceive and have no idea when they ovulate. The quick and dirty of it is that the odds of getting pregnant begin close to zero and then rise around cycle day 7 (with day 1 being the first day of bleeding). They reach a peak on day 15, followed by a slow decline to close to 0 after day 25. This is because most people ovulate around mid-cycle and the average cycle length is between 28-30 days (hence days 13-16 have the highest chance of pregnancy).

Data set two will be more useful to those trying to conceive who are entirely sure what day they ovulated. 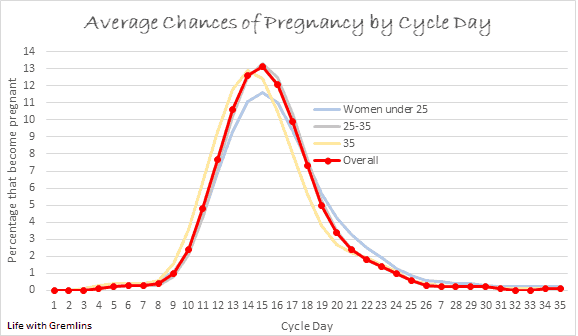 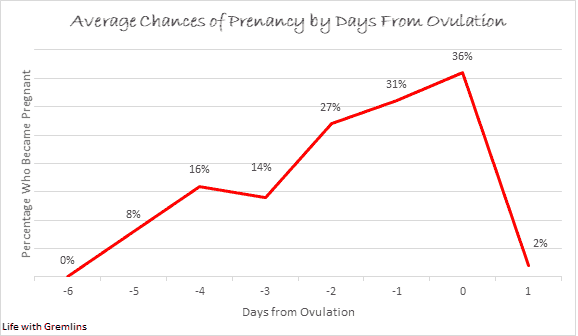 Take away: Considering the high probability of slight miscalculation when predicting ovulation (even with BBT and cycle tracking), most sources average it out to a 20 to 25 percent chance of pregnancy when sex is mid-cycle.

Timing is far from the only factor in the odds of getting pregnant though, for instance, the chances of pregnancy also change with age.

The chances of getting pregnant by age:

In the graph above, you see little change between women under 25 and those over 35. However, when you look at the percentage of women who became pregnant within a year of trying, the difference becomes clearer. This is a result of declining egg reserve and quality. 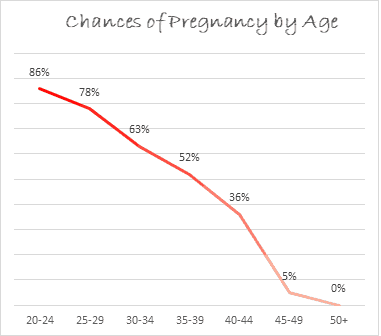 Take away: In your late 30’s the odds of getting pregnant begin to decline, dropping more dramatically after 40. The vast majority of women under 35 will become pregnant with monthly unprotected sex within one year.

Timing and age are the two primary drivers behind the odds of getting pregnant in general (excluding genetics, which is impossible to factor with a wide audience like this. ) Of course, many smaller health issues can play a big role as well. We can’t possibly cover them all but will try to touch on some of the more common issues.

Factors that can affect your overall odds of getting pregnant further:

-PCOS: Often holding hands with a high BMI, PCOS is a hormonal condition that usually results in anovulatory cycles and ovarian cysts. Weight gain, facial hair, thinning hair at the top of the head, and irregular periods are the most common symptoms. Around 10 percent of women of reproductive age suffer from PCOS, and roughly 80 percent of those women are left infertile.

-Smoking: While research is still conflicting, some studies have found active smokers have 50-percent lower odds of getting pregnant each month.

–Activity level: Those who exercise moderately for at least 5 hours a week have an estimated 18 percent higher chance of conception. However, vigorous exercise (more than 5 hours a week, intense workouts) creates a roughly 32 percent lower chance of conception. The exception to this was in women who were overweight, in which case fertility often returns with diet, exercise, and weight loss. Less than 5 hours of exercise a week has no effect on fertility.

Obviously, it takes two to become pregnant, and while this website is predominantly visited by women, the other half of the equation can’t be ignored when it comes to pregnancy probability.

Age is the most predominant factor in the odds of getting pregnant based on a partner. Men are thought to be most fertile from about age 25 to 29. A 2004 study by the American Journal of Gynecology found that the chances a male will conceive a child within a year of trying drops by 11 percent per year. The older a male partner is, the lower the odds of getting pregnant in most cases. Regardless, as a result of age alone, men never cease producing sperm. The oldest known man to father a child was 102 years old.

Other factors on male fertility are less generalized. Things such as environmental exposure to heat or  toxins,  testicular trauma, genetics, and some health conditions can reduce fertility in younger men.