OPKs, or ovulation prediction kits, can be a simple way to help determine when you are ovulating—or about to in this case. In function, OPKs are similar to pregnancy tests in that they are a strip or stick that tests your urine, but they can be a bit trickier to read. So, before we move on to how to use ovulation test strips, let’s start at the beginning and look at what an OPK is and how it works so you can better understand how you use it.

What is an OPK, and how does it work?

An OPK is a test that detects the hormone LH (luteinizing hormone) in your urine to predict ovulation. Understanding how really requires a quick course in the hormones of the menstrual cycle.

At the beginning of your cycle (day one of bleeding or cycle day 1) the hormones that dominate your menstrual cycle, estrogen and progesterone, are both low. This signals Follicle Stimulating Hormone (FSH) to be released. FSH prompts the follicles in your ovary to develop an egg for fertilization. Development of this egg triggers estrogen production. High estrogen then stimulates LH to be produced. LH will peak about 24 to 48 hours before ovulation to cause the release of the developed egg, or ovulation. LH is always present in low levels in the body, it’s just at its highest just before ovulation.

How do you use an ovulation test strip?

When to start and stop testing:
You don’t need to use OPK strips all cycle long unless you really want to. If you’ve already built an average ovulation date (see a full guide here) about 5 days before that average is a safe bet for testing. If you don’t already have an average, until you have a better idea of when you ovulate, you’d want to start testing on about cycle day (CD) 8 as some women ovulate as early as day 10 or 11. Ovulation earlier than this is rare, and arguably impossible, as it takes time for an egg to develop.

You can stop testing once you confirm ovulation. BBT tracking is the easiest method to do so, as on rare occasions, an LH surge can occur without ovulation if the egg fails to release. This failure may result in a cyst or a second surge of LH and ovulation at a later date. Ovulation itself can only be confirmed by ultrasound or BBT as mentioned.

You can use an OPK at any time of the day, but for accuracy, it’s best to choose one time and stick with that time. For example, you do not have to test in the morning, but if you chose to do so you should test at around the same time in the morning everyday.

There are a few types of OPK tests available. Line tests, which resemble a pregnancy test where one line is the test line and the other is a comparison line. These tests come in either strips, which are thin, small strips of paper-like material, and sticks, which have a hard plastic case around the strip for ease of use. Unlike OPK sticks, OPK strips can’t be used midstream (actually peeing on the strip itself) you need to urinate in a cup of some sort and dip them or use a dropper to apply urine to the stick if provided.

Stick tests also offer digital easier-to-read alternative to the line tests, albeit at a higher price. These tests sense whether the strip test inside the stick is positive, and present a digital positive or negative result. For instance, Clearblue shows a smiley face for positive. On the much-more-expensive side, you can also buy monitors that strip tests are inserted into. These monitors often indicate when to test and read the sticks for you, but can run upwards of $100.

The reason OPK line tests are harder to read than, say, a pregnancy test, is because two lines does not equate to a positive result. In a pregnancy test, any second line is positive, because hCG is only present in levels detectable by the test while pregnant (and in a few other rare medical conditions). LH is present in the body all cycle, so you will likely always see two lines on an OPK. For an OPK to be positive, the test line must be as dark, but preferably darker, than the control line. After a few months you’ll get a better idea of how dark your positive line is, but for now, just remember, to call an OPK positive, the test line can’t be lighter than the control.

Below is a standard example of a line test progression. You can see the line darkening each day, but only the final test in the photo is positive. 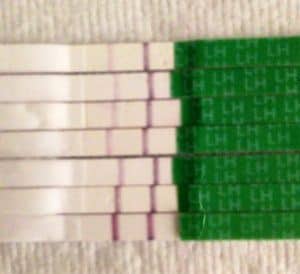 Finally, because hCG and LH are similar hormones, OPKs will sometimes detect hCG. This is a possible explanation for prolonged true positive OPKs, but because LH is always present, it is unwise to attempt to use ovulation test strips to determine pregnancy. An actually pregnancy test will also detect pregnancy before an OPK would turn positive anyway.

We hope this guide has fully answered any questions you may have had on how to use ovulation test strips. If we missed anything or you have any questions, we welcome comments and suggestions.