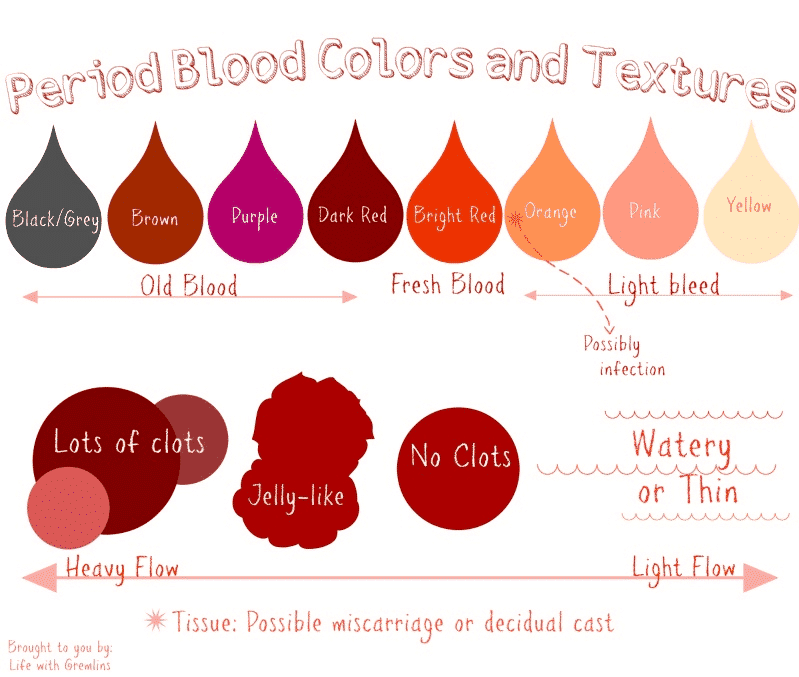 Bright red period blood was produced by the body recently. During a period, that just means what’s being shed was recently released into your uterus. You may see more bright red blood if you have a lighter flow or frequent periods. Bright red period blood is also common at the beginning of a cycle. If you see bright red blood outside of your period, that may be a sign of light spotting from hormonal imbalance/flux as a result of ovulation or implantation (a sign of pregnancy).

Dark blood may appear red, or even close to purple, and is typically older blood. It could have been part of the uterine lining and so had more time to break down, begun to coagulate in the vaginal canal, or been exposed to air. Many women notice darker red blood when they first wake up in the morning. This blood may also be clotted.

Black or brown period blood is also older blood. Most women notice these colors at the tail end of their period or during light spotting at the beginning. It usually isn’t that heavy but can be in those with infrequent periods. Brown blood is also sometimes seen when bleeding is very light and takes some time to make it’s way out, so to speak. Period blood clots frequently appear darker as well, but we’ll get to that in a moment. You can read more about brown discharge, rather than actual bleeding, here.

Bright red blood mixed with cervical fluid can appear an almost orange color with red flecks or look a bit rusty in color. Bright orange period blood can also be a sign of infection, though. If you see it frequently, it has a foul odor, or it doesn’t also have a slippery consistency, see your care provider.

Pink period blood is a result of light bleeding. It’s most common at the beginning or end of a period, but if it’s the only blood you see over multiple cycles, it’s possible your estrogen is low.

Yellow period blood may not actually be blood at all. Cervical discharge that’s exposed to air or has been in the cervix for some time may appear yellow. Yellow cervical discharge is more common and copious in pregnancy. It can also be a sign of high estrogen.

Heavy clotting is usually prescribed to heavy periods. As blood is expelled, the body releases anticoagulants to keep it from clotting. If your period is heavy, sometimes the blood flow and speed doesn’t give those anticoagulants time to work, and clots are the result. Clots can occur in any color of blood, though they are more commonly dark in color. Frequent heavy clotting or clots larger than the size of a quarter can be a sign of a more serious problem and should be evaluated by your care provider.

Menstrual blood that seems almost slippery with a jelly-like texture is mixed with high levels of cervical mucus. Cervical mucus is always present in your vagina, even during menstruation. If your flow is light, it may be sufficient to alter the appearance of blood texture. You may also notice this after a bowel movement when more mucus is pushed from the cervix or if you’ve recently been pregnant. Blood with numerous small clots may also be described as jelly-like.

Thin blood is being properly prevented from clotting. It is often bright red in color and accompanies a light to moderate flow. Fresh blood will appear thinner, as will blood that is light and mixed with cervical fluid. In the latter case, it may also seem watery.

Tissue in period blood or a stringy texture:

If your period blood is stringy or there is what appears to be actual tissue within your period blood, it is possible you suffered an early miscarriage. It could also be part of your uterine lining.

Miscarriage tissue is typically described as being grey to white in color. It does not look like a common blood clot. Another type of tissue called a decidual cast may also be shed in cases. Decidua is part of the mucus membrane of the uterus and is often described as looking like “chicken skin.” It may come out as one uterus-shaped piece or in small, stringy chunks. It is possible to only see one small chunk and not shed an entire cast.

Decidual cast passage can be a sign of ectopic pregnancy or hormonal imbalance. It’s more common in those using hormonal birth control. If you have continued pain after passing a decidual cast, you should seek medical attention. You can do an online image search for both types of tissue to get an idea of the difference. Due to their graphic nature, they won’t be shared here.

Keep in mind, that in most cases, minor changes in period blood colors or texture are entirely irrelevant and don’t suggest any health problem. However, prolonged changes such as frequent heavy periods, odors, irregular periods, short periods, and/or severe pain during menstruation should be evaluated.

Telling the Difference Between Implantation Bleeding and a Period with quiz