Generally, getting your period is a pretty solid indication you aren’t pregnant, but generally is not always. Bleeding during pregnancy can be mistaken for a period while pregnant, and pregnancy bleeding, especially in the first cycle after conception, is more common than you might expect. Why? 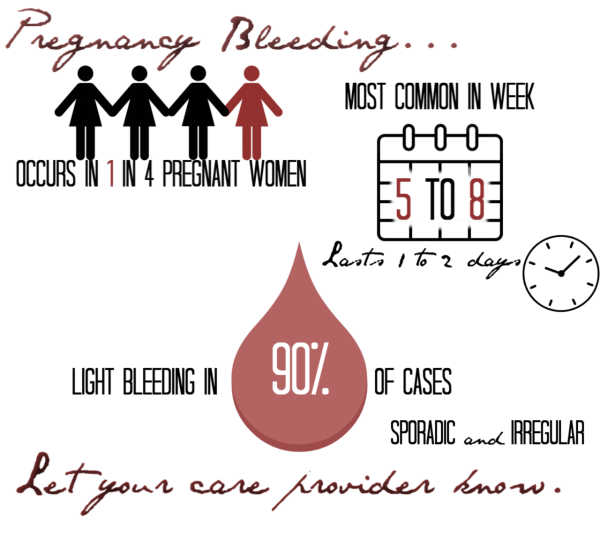 Can you be pregnant and still have a period?

While you can have bleeding around when your period is due and still be pregnant, you can’t have a true period while pregnant. If you are pregnant, ovulation won’t occur, and your uterine lining won’t be entirely shed along with an egg, so by definition the bleeding isn’t a period.

So, what might cause bleeding around when your period is due in pregnancy?

Conception that occurs close to menstruation or low progesterone levels may cause what looks like a period while pregnant.

Conception may not occur until mere days before your period is due if you have a short cycle or don’t ovulate mid-cycle.

For example, let’s say you’re regularly maintaining a 26-day cycle. Chances are you’ll ovulate around day 13. Even if fertilization occurred that day, it would still take six to twelve days for the fertilized egg to reach and implant in your uterine lining.

By this timeline, your body wouldn’t know to continue producing progesterone, the hormone that maintains your uterine lining, until somewhere between day 20 to 25 of your cycle. That could leave as little as one day between implantation and projected menstruation.

If those hormone levels are insufficient, such as in a situation of low progesterone from luteal phase defect or had already begun to fall, you might have what seems like a lighter than usual period. You might even have what seems like an entirely normal period. In that case, it’s possible not to have any indication you’re pregnant until you are already around eight weeks pregnant.

It’s important to note that any bleeding following the first bleed would not occur in a timely, predictable manner like a period. It would be sporadic bleeding with a varying flow. Multiple timely bleeds like a period, whether irregular/light for you or not, are very unlikely to be pregnancy bleeding.

As break through bleeding can be indicative of low progesterone, it’s a good idea to let your health care provider know about it. In fact, any bleeding during pregnancy should be evaluated. Basal body temping can be a great way to catch such a situation, as a rise in temperature confirms ovulation and prolonged high temps for 16 days can be a sign of pregnancy, period-like bleeding or not.

Implantation bleeding could be mistaken for a light period.

Many women also mistake implantation bleeding for a period while pregnant. Following the same example above, if you often have a light period, and had spotting on day 23, you might mistake that spotting as your period a day or two early.

Bleeding varies from woman to woman, but a heavy flow is almost never implantation bleeding. You can read a full article or try our quiz on telling the difference between implantation and your period here.

Finally, numerous other issues can lead to pregnancy bleeding. Some examples include:

In short, bleeding doesn’t guarantee that you aren’t pregnant, but then it’s usually a pretty good indication. Pay attention to your body, trust your instinct, and when in doubt, act pregnant until you’re sure you aren’t.

How rare is it to be pregnant and have your period? What are the risk factors?
Missed Period Negative Pregnancy Test Explanation
Am I Pregnant? Calculating Your Chances of Pregnancy (includes a quiz)