It’s too spicy! It’s too bland! I don’t like ketchup, and I’d prefer ham! It seems the pickiest eaters in the world are kids. Those undeveloped kid taste buds change their minds daily, and it can be very frustrating. Thankfully there are some simple steps you can take to help prevent your child from becoming a picky eater and likewise eat if they already have. 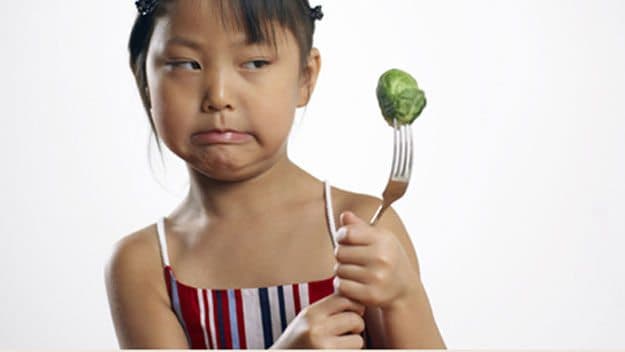 The try-it-rule for picky kids:

My kids, like most, will turn their nose up at almost anything that looks different, whether they’ve eaten it before cooked in another way or not. For this reason, we have a try-it-rule. If my kids want dessert, which thanks to my sweet-tooth is never missed, they must try at least one bite of whatever is on their plate. They also must eat an acceptable portion of the overall food on their plate. If they don’t like one item after trying it, and eat the other two for example, that’s OK. If they don’t eat, they aren’t hungry enough for dessert and don’t get it. It’s especially important not to reward not eating. We apply the try-it rule to every meal, it doesn’t matter if they’ve tried it before, because I’ve found even if they didn’t like it the first five times they tried it, they may the sixth.

Eliminating outside influence on picky eaters:

Next, I may hate seafood, nut chunks in my bread, and extremely spicy food myself, but you will never hear me say that in front of my kids. Many picky eaters picked up their ideas about certain foods from comments they heard adults say. Be careful not to express your own dislike for certain foods or cooking techniques. I’ll go as far as to eat things I don’t like and pretend I do, just so my kids have a bias-free opinion on food. It’s also important to offer healthy foods from birth, so you’re not trying to drop something like brussel sprouts on an unexpecting kid. If they’ve always had it, they’re more likely to eat it.

It stays on the table:

Even when my kids refuse to eat, the food sits right where it was set. We long ago realized trying to force them to eat and sit at the table only resulted in a fit, but found when they got hungry, they would come back and eat. We don’t offer any snacks unless meals were eaten. If they weren’t, I direct my kids to their sitting plate for snack. Granted it’s not an you-eat-it-or-starve situation, the plates are switched when a new meal is served, but not offering alternative food options often eliminates picky eating.

How to get a picky eater to eat:

Peek-a-Boo I don’t see you:

I saw my sister cooking spaghetti once. She had a blender and was pureeing vegetables. Carrots, celery, onion, you name it, it was becoming goo. I naturally said, “What in gods name are you doing?” She was blending the vegetables because her picky eater disliked chunks, and the vegetables he liked changed daily. By making them unseen the kids ate that spaghetti damn near without a fork, nutritional veggies and all. So trick number 1 to get a picky kid to eat? Hide it. Later on you can slowly make those hidden foods more visible, and use, “You’ve been eating it all along” as a defense.

Come on over here Baby:

The second best way to get a picky eater to eat, which may make a mess in the mix, is to get them involved. Research shows kids that help prepare what they eat are far more likely to eat it, whether they like the ingredients or not. Your picky eater is never too young to help either, just pick age appropriate tasks. For example, younger kids could simply pick fruit at the grocery store or wash it at home. An older picky eater could stir the soup or crack the eggs. Another tip for picky kids is to let them make their own plate. By allowing them this independence, you make them feel as if they chose to eat what you’re giving them, which eliminates the fight for dominance so many toddlers and kids go through.

You can also consider a home garden. Kids that grew the vegetables you’re trying to make them to eat are more likely to eat them out of pride. If you don’t have space consider and upside down garden to double the fun and cut the space.

I know most parents’ don’t have time to make every single meal time fun, but turning meal time into a game or engaging educational experience is another way to trick a picky eater to eat. Even if meal time doesn’t become a game, numerous studies show that families that eat together not only have more fun, but their children are less prone to obesity and eat healthier. Just sitting down with you child every meal time will help them eat.

I hope this has helped you win the meal time war with your picky eater. Good luck, and mind the dog, he’s a traitor.