It’s been three days since my kid’s school sent home a notice their facility had been exposed to pinworms, and I am still grossed out. You know as a parent of school-aged kids I totally expect to get warnings about things like lice and strep throat, but worms?!? Just reading the notice gave me the heebie geebies and led me to do some serious research on worms and pinworms symptoms. So, what do you probably not want to know, but should know about pinworms?

As the name implies, pinworms are a type of worm also known as seatworms or threadworms. To be specific, they’re intestinal round worms that are white in color and range from about ¼ of an inch to ½ inch in length. Now on to the part that is likely going to have you inspecting your own poop for the next month. While you are sleeping female worms exit your digestive tract through the anus and lay their eggs in the skin folds there. You can have worms without knowing it until the adults die and are excreted to be seen in your excrement.

How do I know if my children or I have pinworms?

I was serious about inspecting your poop. You should be checking your kids too. Be on the lookout for what looks like small pieces of white thread. Outside of seeing them in poop you may also notice you or your child experience: 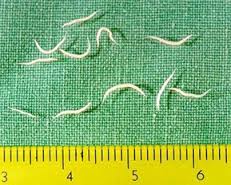 You may also consider checking your child at night with a flashlight. Wait a few hours after he/she has fallen asleep and look near the anus for white, moving worms. Yes, you will be able to see them, they are as mentioned up there a bit about the size of a staple, but only come out at night. The general recommendation is to check 2 to 3 nights in a row.

Ok, how do I avoid pinworms?

What, gods forbid, do I do if my kid does have pinworms?

There are over-the-counter treatments for pinworms at most department stores, but you can also get a prescription from your doctor. You will have to clean and sanitize the crap out of your house though, surviving eggs can result in a new infection. Also, don’t feel bad, pinworms are actually the most common parasite in the US and more common in school-age children than lice. The more you know…