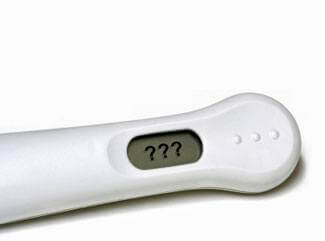 Most of us are aware of what pregnancy symptoms are. The media has shown us pregnancy is this obvious in-your-face change. In reality though, pregnancy symptoms can be far more subtle. Things like nausea, bloating, breast tenderness, discharge changes, food aversions/cravings, flatulence, mood swings, hot sweats, frequent urination, fatigue, and more can vary in severity. Of course, don’t some women get those same symptoms just before their period? Why is that? Is your body telling you pregnant or period? How can you judge, PMS or pregnancy?

What causes PMS or pregnancy symptoms?

The first question there comes down to understanding what causes both pregnancy symptoms and PMS, because the culprit is the same—hormones. In fact, it’s even the same hormone for the most part.

The second half of your menstrual cycle after ovulation (the luteal phase) is dominated by a hormone called progesterone. Progesterone’s job is to maintain the uterine lining for pregnancy before implantation and during pregnancy afterwards. It’s present in both pregnant and non-pregnant women. Progesterone concentration just becomes higher in early pregnancy. High progesterone can cause nausea, bloating, breast tenderness, discharge changes, food aversions/cravings, flatulence, mood swings, and hot sweats—a fair chunk of pregnancy symptoms. Essentially, pregnancy symptoms are just PMS on steroids, because progesterone levels are higher and also slowly joined by hCG (Human chorionic gonadotropin). hCG is the hormone that causes a pregnancy test to become positive, by the way.

So, how can you tell if it’s PMS or pregnancy then?

While there are a few pregnancy symptoms that are uncommon in PMS (frequent urination and fatigue), all sorts of things can cause those symptoms from the flu to a hot day. The real settling factor is actually time. Pregnancy symptoms won’t occur before a missed period unless you have an irregular cycle or a very long cycle. That’s the truth. There is absolutely no reason to stress over symptoms before a minimum of 8 days after ovulation or intercourse if you don’t know when you ovulated. As PMS occurs before your period, in almost all cases unless your period is late, your symptoms are PMS.

I know, especially for folks trying to conceive that is a hard answer to swallow, but hear me out. For your symptoms to be pregnancy related, you have to be pregnant. It takes a minimum of 6 days for an egg to travel and implant (making you pregnant), but the average is 8 to 10 days. After that, it takes time for hormone levels related to pregnancy to begin to rise (higher progesterone and hCG). You can’t even get a positive pregnancy test for about 48 hours plus.  With the average menstrual cycle at about 28 days, and ovulation frequent at mid-cycle, this means for the average cycle you aren’t even pregnant until the question of PMS or pregnancy becomes a moot point. This is why I recommend whether you’re hoping to be pregnant or praying you aren’t after an oops, that you disregard symptoms entirely until your period is due. If you’re more than 3 days late (3 days +/- is considered normal period variance), then just take a test. It’s a far easier answer than trying to analyze your symptoms and a lot less stressful.

What if your period is late or have long/irregular cycles?

Now there is an exception to that rule. In those that have irregular or long cycles, ovulation is often erratic. In which case, there may not be a firm period due date or periods may already be absent. Second, it is possible to have a late period without being pregnant. We also have a full page on missed periods with a negative test here. In both case timing goes out the window and a pregnancy test is going to be the only answer for you. If your symptoms are pregnancy related, unless you are much further along than you think you are, a pregnancy test will reflect that.