Continuing with our exploration into pregnancy probability statistics, let’s dig into precum pregnancy odds. “Can you get pregnant from precum?” and “does precum contain sperm?” are pretty common questions in the chances of pregnancy realm. Why? Because the pull-out method is one of the oldest and most common forms of contraception. That isn’t because it’s exactly reliable (we’ll get to just how reliable it is in a second), but because it’s free and it’s supposedly easy.

First off, what is precum, and why does it happen?

Precum (also known as pre-ejaculate) is a clear, alkaline liquid that proceeds ejaculation made up of mucus and enzymes that acts to reduce the acidity of both the urethra and vagina as sperm due poorly in lower pH environments. It may also act to aid in lubrication.

Can you stop precum? When exactly is precum released?

The amount of precum released varies greatly between men, but all men produce precum and have absolutely no control over its release. In fact, unlike actual ejaculation, most men can’t even feel the release of precum. As the name implies, pre-ejaculate proceeds ejaculation and is released in response to sexual arousal.

Surprisingly, there are very few studies on this subject. The few that do exist (I’m talking less than five) also don’t agree. A few studies (link for one, two, and three) found precum contains no sperm at all, but in a more recent study, 37 percent of men produced precum samples that contained motile sperm (capable of causing pregnancy).

The number of sperm in these samples did vary, but for the most part, it was well below the quantity found in actual ejaculate fluid. These men had urinated prior to sample collection. As the jury is still out, so to speak, most reputable sources will state that, yes, precum can contain sperm. That sperm may not be eliminated by urination.

What are the chances of pregnancy with precum? 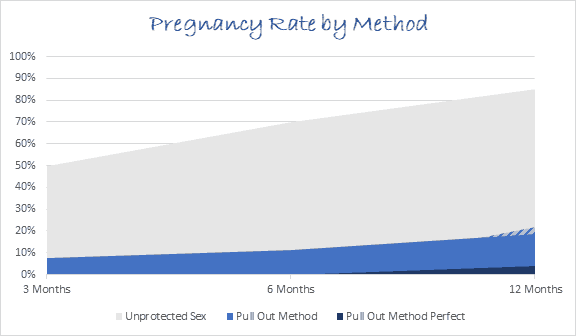 A review in 2011 done by the Office of Population Research at Princeton University found with perfectly timed “pulling out” or the removal of the penis prior to true ejaculation 4 of every 100 couples (4 percent) become pregnant within a year. As the pull-out method also leaves a high chance of error (not pulling out fast enough), the overall rate of pregnancy in couples who only use the withdrawal method is 22 out of 100, or 22 percent, within a year.

A study done in 2002, also by the Office of Population Research, along with the Guttmacher Institute, broke that down into slightly shorter time frames with 7.8 percent becoming pregnant within 3 months, 11.3 percent by 6 months, and 18.4 percent by 12 months (less than the estimate in 2011). This study didn’t separate “perfect use” from just average pull-out practice where lots of folks make mistakes.

If you average that all out to a monthly basis, you get around a 1 to 2 percent precum pregnancy chance as a likely statistic for a one-time incident during any given month.

Is there a way to reduce the risk of pregnancy from precum?

Because there’s no way to stop the release of precum, the only way to reduce the possibility of pregnancy from precum is to employ other birth control methods, such as the birth control pill, female or male condom use, or intercourse timing. Note that precum can also spread sexually transmitted diseases (STDs) and sexually transmissible infections (STIs). Condoms are the only form of birth control that protects against STDs and STIs while also reducing the chance of pregnancy and are 97% effective with perfect use.

Quick answer: Can you get pregnant from precum? If so, what are the odds?

The chances of pregnancy from precum vary from about 4 to 22 percent assuming frequent sexual intercourse over the course of a year. A single act likely holds a chance well below this. This estimate ignores intercourse timing, a topic we covered in part one of this series on pregnancy probability statistics if you missed it.

You might also enjoy:
Pregnancy Probability Quiz
How Long Does Sperm Live in Various Situations
Period While Pregnant: Is It Possible?