When our about-to-be 6 year old requested a secret agent party, I thought sure, spy party, how hard could that be? I assumed much like his previous pirate party there would be tons of stuff for that sort of thing, being what kid doesn’t like to play spy? Surprisingly, I was pretty wrong. I ended up having to sort of hob-cob a party together from bits of crime party supplies among other things. So, if you catch yourself with a kid who wants a spy party, here were my ideas, how they’re implemented, and direct links to any supplies you might need. It’s your own little one-stop guide for a spy-tactular birthday party—too far, I’m gonna pretend I didn’t just say that. 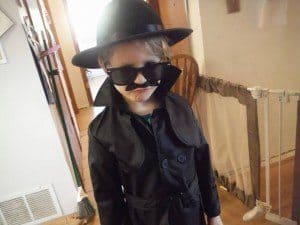 First, I needed some invitations. I’m notoriously cheap, and I couldn’t find pre-made invites anyway. Below were my invites I made (my info is removed of course, you can add yours using paint if you’d like to just steal this image). 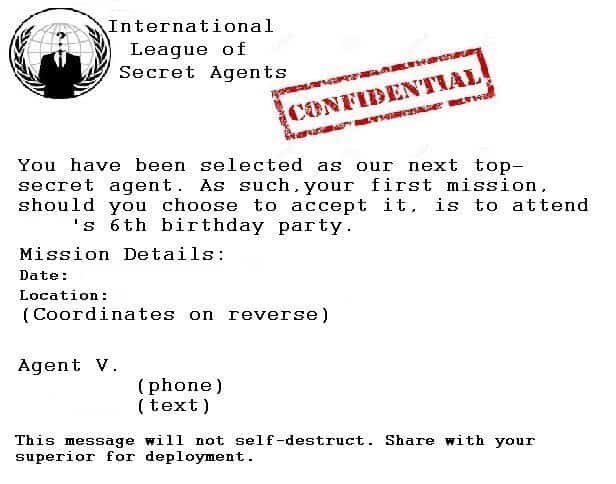 I printed them on plain paper with a map on the back and stuck them into little yellow envelopes. 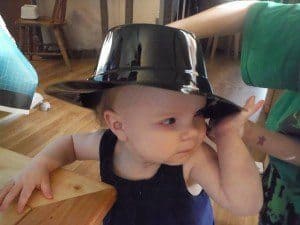 Next, I ordered goodies for the party. As a mom of four from Alaska, here, at least, it is way, way cheaper to get this sort of stuff off Amazon with a Prime membership, but if you live in less remote parts of our little planet, you might find these cheaper local, it’s worth a look. My bags included:

Now, I’m gonna admit here my original plan for this cake was supppper cool, and a complete failure.

I bought a small soccer ball 3D cake pan and planned to make a large bomb out of it, but I ended up putting off cake baking until late the night before the party and by 3 am I was so frustrated with that cake I literally spiked it into my trash can (GOAL!). If you have more patience and time than me, I bet it’ll be awesome. I planned a donut hole for the top, and then a sparkler candle. The candle was also a let down, the Etsy listing missed that bit about it being for outdoor use only—but if your spy party is in summer rock on. Mine was supposed to be paired with a brownie folder frosted tan with happy birthday message and “TOP SECRET” on it, and I managed to botch my frosting there then not notice till it was on the cake, so that went to the trash too. It was a cocktail kind of evening. Anyway, so what did work for me?

In the end, I settled for some mini-cake bombs on a simple sheet cake. These bombs are pretty easy, though you do need a cake pop maker. After that it’s just a frilled cocktail toothpick stuck through a rolo into the cake ball, then dipped in chocolate. 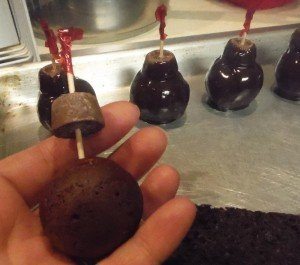 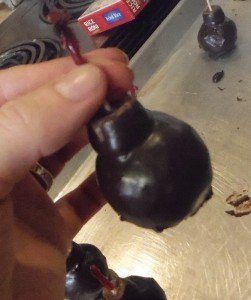 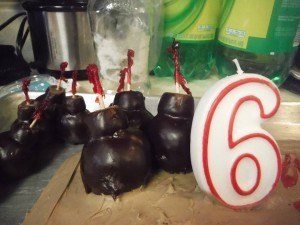 We didn’t do anything special for the food really. We served hot dogs, chips, fruit and veggie platters, Pinterest says you could call those hot dogs “detective dogs,” though I think detectives are different than a spy, heck I’m not sure spy and secret agent are the same… We did do a truth serum punch which was made from Sierra Mist, fruit punch, rainbow sherbet, and mixed fruit. You can find a recipe for that here, though I basically just gave it to you.

Spy Hunt:
We usually do a piñata, but last party a few kids almost got hit in the face with a Louisville slugger, so we decided to reinvent the candy distribution. We hid the candy, and then created a scavenger hunt with clues to find it. I’d give you our clues, but they were kind of house specific, unless you have a 7-ft avocado tree in your living room too. I guess it’s the idea that counts. 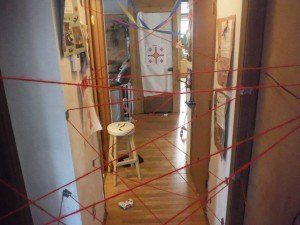 Laser Hall:
This one I borrowed from WillowDay, you take some yarn and build a simple laser beam field. The kids actually spent hours climbing through that thing before it got torn down.

At the end of our laser field we filled a small bedroom with balloons for the kids to pop (there was a clue in one even). I recommend a bicycle pump for this or an air compressor. I vastly underestimate how many balloons it would take to fill a room. Another parent at our spy party suggested adding some prizes to balloons as well. You can fill balloons easily using a soda pop top like this.

We hung balloons from the ceiling too, and drew bad guy faces on them for the kids to shoot at with their goodie bag guns. This idea was adapted from Miss Banana Pants idea, she used helium and weighted the balloons to the floor. The ceiling hang worked just as well, and didn’t require buying helium. If you skip the goodie bag guns, NERF lots can often be found on Ebay pretty cheap for during-party use.

We bought some pull down target papers (hunting isle of your local store) and washable finger paint. Then we dipped dart tips in the paint and let the kids shoot. This was by far the favorite game, but I thought this one up, me the mom spiking cakes into trash cans at 3 am, so not surprisingly, I have a now-that-I-tried this tip. This was way messier than I envisioned. I recommend doing it outside (where the rain cleans up) or laying down a painter’s cloth before starting. We have hardwood floors and I have a steam mop, so it was easy to clean up, but this does get paint everywhere between the shooter and the target as it flies. It is safer than paint ball guns at least. 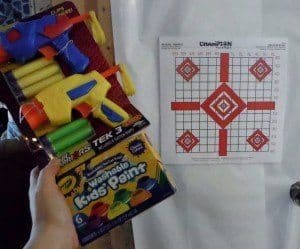 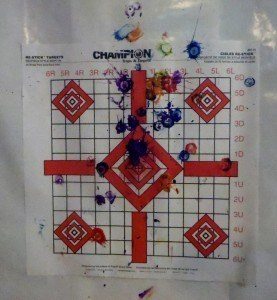 ….and that was the whole spy party. If you’re still with me, thanks for reading and I hope this was helpful.