On a roomy 5-acres in Sterling, Alaska, we made a go at making us a tiny orchard—someday. We have apples, a pear, apricot, kiwi, a variety of berries, and first year grapes. Right now most of our trees are little over a few feet tall and have only been in the dirt a few years, but one thing we lack is cherry.

I love sweet cherries. They are by far my favorite. So, you can imagine how bummed I was when I learned the general consensus was that while sour cherries do well here, sweet cherries are a solid no-go. I, however, am a bit stubborn and have some serious google-fu so I did some digging and found as many references to sweet cherries in Alaska as I could. You can see what I found with links at the end of the page, but in summary, it seems sweet cherries go just fine down a little more to the southeast in Haines and Skagway, drop dead further north in Fairbanks, but have had some success in Anchorage. Anchorage has a very similar climate to where we are down on the Kenai Peninsula, so there is hope. Hope enough to buy some trees.

My next question was, what kind? I mean not all sweet cherry trees are created equal. Luckily, that same digging for mentions of survivors did leave a few repeat varieties mentioned, though many mentions simply stated sweet cherry. I eventually decided and ordered Kristen and Lapins.

Kristen is black sweet cherry that’s done quite well in some northern climates such as Norway. It’s touted as the hardiest sweet cherry variety usually rated for zone 4. Kristen is not self-pollinating and needs a friend. I did check and Lapins is a cross-pollinator for Kristen.  Lapins is self-fertile and a universal pollinator, though often rated slightly less hardy than Kristen. Some sources say zone 4, others zone 5.

Kristen also produces fruit early in the year, which is important up here with our short grow season. Lapins, sadly, not so much. Honestly I am just hoping she survives and flowers enough to pollinate Kristen. Survival is step one, fruit can come after.

Both our trees are on gisela 5 root stock, suggested to hasten fruit production and remain hardy to -20 F. I can remember winters we hit below -20, but not in recent years, so I think I’m playing a hopeful gambler here.

I bought both trees from Raintree Nursery at around $30 each with a painful $50 shipping working out to $55 a tree. They arrived in wonderful shape and have begun leafing out nicely. The pics below were taken about 2 weeks after arrival. These were “whips” meaning they were literally bare-root sticks when sent. The second picture is one of the grafts. Stalks are about the width of a quarter. Trees about 4 ft tall. 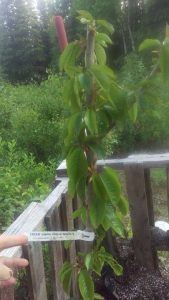 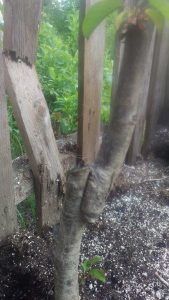 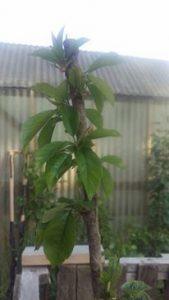 UPDATE July, 2017: These experienced great growth during the summer with more than a foot per branch. In fall, we got a bit busy and forgot to take any steps to protect them though. Then we had a particular cold winter holding around -22 for over a week, and sadly, these poor girls died back to the snow line. The roots did survive and broke dormancy below the graft at the same time our local birch did. A scratch test also found life above the graft. Lapins finally put out new growth above the graft in early July and seems to be making a recovery despite being much shorter now.

Kristen followed suit in late July. In my opinion, if tried in a high tunnel or with better weatherization (as  the bottom 18 inches or so covered in snow did fine) Kirsten and Lapins could make it in South Central no problem. Once we have a high tunnel, I will definitely be trying. For now, I suppose I am stuck with two very dwarfed sweet cherry trees.

UPDATE: Winter, 2018
Kristen did not survive above the graft after a second winter. It recovered poorly in the summer of 2017, and I assume just didn’t have the strength to make it through.

Lapins did survive above the graft, but also didn’t recover much over the summer, and I have my doubts it will survive winter 2018– will update in the spring. Both root stocks have sent off branches, and we stopped pruning them as the plan is to let those get stronger, and then try a new graft.

UPDATE: Summer 2019
Both trees did not come back above the graft this spring, but the root stock is flourishing. This will be my last update until I try again (and I definitely will).

Mentions of sweet cherries in Alaska:

Successful:
Location: Haines,  2012
Writer Rob Goldberg notes he is in zone 5 near the coast.
Source

“They (sweet cherries) ripen from mid-July to early August. Stop watering when the cherries start to turn red.  All varieties will crack when it rains heavily during ripening, but varieties bred for the dry summers of Eastern Washington, such as Bing and Rainier are more susceptible.  Look for Stella, Lapin, Black Tartarian, Kristin, Sam, Hartland and any others that are crack resistant.  One solution to cracking is to put down a tarp around the tree if rain is imminent.”

Text simply notes “sweet cherries” bearing fruit at an experimental station. An image shows a large tree  (double the height of the man in the photo) stated to be a sweet cherry.  Fruit production unknown.

Sweet cherries are mentioned at the Sitka station again, here, stating 10 variety were tried with “Republican” being the most successful. Many suffered winter-kill, but all bore fruit in 1927. It was noted that there were also unknown variety of sweet cherries thriving in local orchards, however none produced fruit, potentially due to a lack of a cross pollinator. Lapins, a self-pollinator, is then suggested for trial but no follow-up could be found.

“Leiser says that one original Anchorage townsite lot has a producing sweet cherry tree that is 25 years old. It is an unknown variety that was bought from Sears……Wayne Leiser is well-known greenhouse manager, news-paper gardening columnist and gradnate-horticulturist.”

Local blogger, mentions a sweet cherry in her yard producing fruit. Appears to have been planted in 2010 (5-year survival). I popped her a comment and she says her cherry is Kristen on Gisela 5 as well (so at least it seems like I’m on the right track).
Post mentioning purchase
Post mentioning fruiting

Survived with damage:
Location: Anchorage 1986-1987 (zone 4)
Source
“Kristen is a black sweet cherry that has performed well in Norway and Montana. Both I and Lawrence Clark noted moderate to severe winter damage in 1986-87 in Anchorage. Never the less…this cherry deserves to be tried again in Anchorage.”