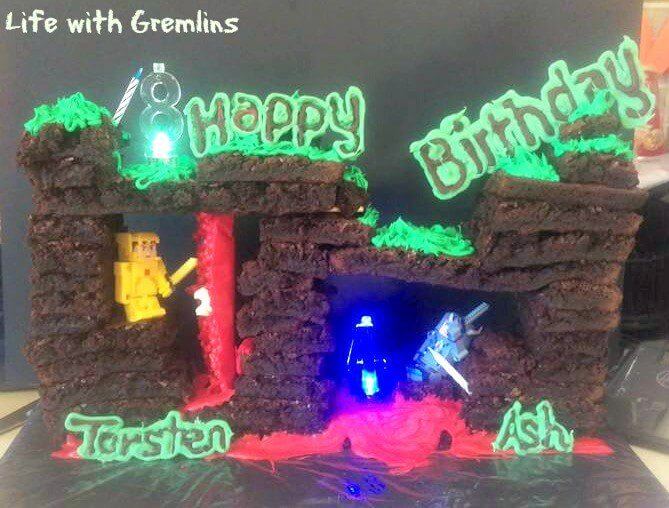 You’d think making a cake based off an entirely square pixel game would be super easy, but when my kids wanted a Terraria birthday, I admittedly was a bit stuck on the cake. A quick Google will bring in loads of Minecraft cake ideas, but Terraria cake ideas are a little fewer and far between. So, I decided to try to use those Minecraft cakes for inspiration, but also recognize that they aren’t the same game.

One of the major differences between Minecraft and Terraria is that a good part of Terraria is played below ground. I thought then that one major difference between a Minecraft cake and a Terraria cake should then be the depth. I wanted to go vertical! Cake itself would have worked for that, but then the bottom layers would have little frosting anyway, making brownies the next logical conclusion. The resulting “cake” was really cool looking albeit a bit of a learning experience, and the brownies worked very well for our park party (no knife needed).

I will start off by saying that you don’t have to follow my cake exactly. You could skip the chocolate wall of flesh for instance or change your cave layout. I have two kids who share a birthday, so my cake also needed two large caverns for the candles. With that, how did I make this thing?

I recommend starting by baking one pan of brownies, and then measuring what size brownies you want to use as “blocks.” Mine were 4” x 3” x 1” meaning from one 13” x 9” pan of brownies I got 9 blocks (I cut the pan in half on the 9” side and in 3 rows down the 13” side (a 13 x 9 pan bakes out to roughly an 8 X 12 sheet). This allows you to take graph paper and plan out your cake. In my half-finished sketch below (sorry, I spaced taking a “done” picture) you can see what I mean. In my plan, each block on the paper represented an inch to plot how many blocks long I planned to make the cake, how many blocks high, and where the support sticks would be. 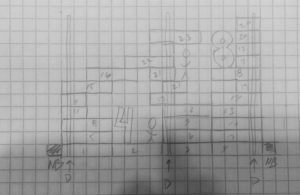 I also measured the figurines and candles I planned to use to ensure the caverns I created where tall enough for them to fit. In the end, my cake took just shy of 4 pans of brownies (I used boxed so 4 boxes) equating to 27 brownies. This is important information, because to get clean cuts with brownie, they need to fully cool. Knowing how many pans you need allows you to calculate how far ahead of time you need to start baking to assemble your cake. In places you can see some brownies were only 2” wide, I broke some brownies in half to create more cave-like shapes.

If you were going for a quite short cake, you probably wouldn’t need a support as brownies stack well, but my cake was about a foot tall, this meant building a support. I used green florist foam (mine was 18” long), wood skewers, and some poster board. In retrospect, I would have used wrapping paper on the base, as it would be easier to cover. All I did was cover my foam with the poster board, then measure where my support sticks were planned and stabbed um in there. As you can see from my unfinished plan up there, my cake was 4 blocks long (16”), with a support on the outer edge of each end and one toward the middle.

Assuming you have baked your brownies (as I used box brownies, I’m not providing a recipe). You simply begin sliding brownie blocks onto your supports following your plan. 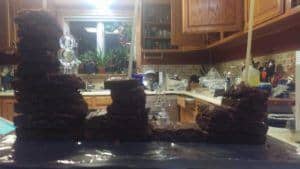 My plan caught a snag in that I had areas where brownie sat unsupported to form cavern roof. It ended up being too soft for this, and I had to add wood skewers horizontally beneath those brownies. I also didn’t cut those longer pieces in 4” blocks, they were left at 8” each. It’s ok if during assembly you find you have to improvise a bit.

My cake had two Terraria figures. I bought them off Amazon. They, among other armor options, can be found here:

My “candles” ended up being too tall with actual candles in them, so I used flashing number bottoms with candles as torches in the walls.

The flashing number candles can be found here, but I actually found them cheaper at Walmart, so you may also check there.

My about-to-be 8 year old actually requested the wall of flesh. He was relatively easy to make, but you could easily cheat and use figurine monsters.

If you go this route, just cut a butter box in half (4-stick pack) and cover the inside with freezer paper. Then pour in red sugar pearls (sort of like sprinkles, but round), followed by prepared red candy melts. While the chocolate is still soft (before freezer-ing this is will stay soft for some time) place in gummy eye balls (also found cheaper at Walmart, but my boys have an October birthday) and then make a mouth by microwaving one red candy melt until barely soft and inserting chopped up white chocolate chip slivers. Scrape your red chocolate melting bowl and make some little wiggly lines on freezer paper, freeze them about 5 seconds, then place them into the still-soft base. Shove the whole thing in the freezer about half hour or until it comes out solid.

The lava was also made with red candy melts, just liberally put in there with a decorating bottle.

The “happy birthday” words were made by printing out the words I needed using this Terraria font generator. Just place your print out below freezer paper and trace it with first brown tempered chocolate and then green. When finished, place it in the freezer for hardening. This is a very easy way to make “professional” looking cake lettering by the way. I warn, this type of lettering will not handle high heat. If your party is someplace very warm, keep that in mind. It will hold up better the thicker you layer the chocolate. 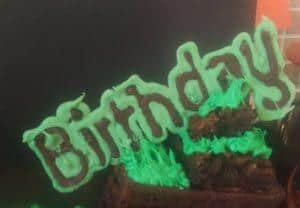 And that’s it. The kids loved it. It didn’t cost me like over $100 to have made for me, and it was relatively easy. 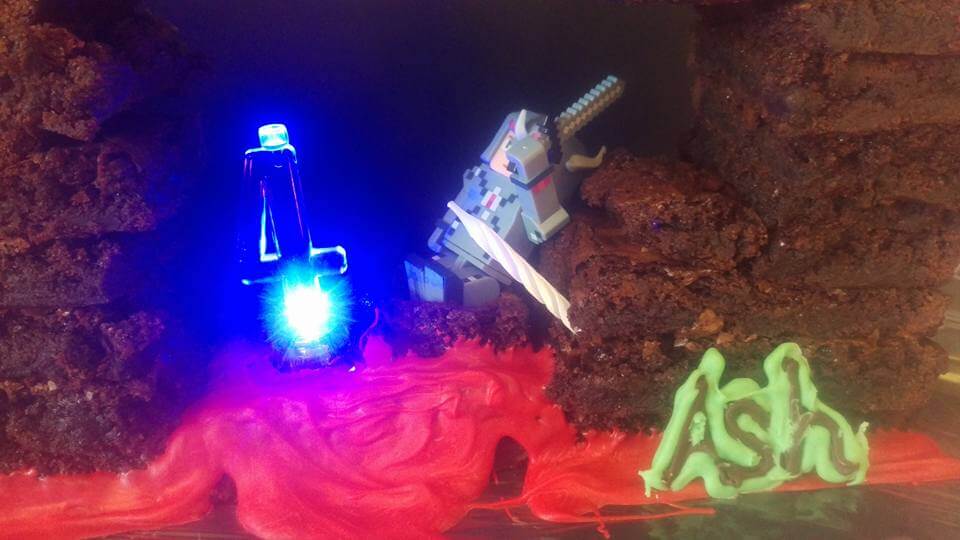