Turkeys, pumpkins, pie, cornucopias, and tiny black hats: these are all things we commonly visualize when hearing the word, “Thanksgiving,” but why? Why do we consider such things Thanksgiving symbols? Every symbol has its significance or at least a history of how it came to represent a holiday. If you’ve ever wondered just what Thanksgiving symbols mean, or how they came to be symbols in the first place, you’ll find a few answers below.

This is actually a bit of a mystery. There is no proof that turkey was even eaten at the first Thanksgivings. We eat turkey on Thanksgiving because wild turkey was more available to the colonists, who turned the harvest celebrations into a holiday, than goose. Goose was the traditional feast eaten in England in honor of the harvest. However, Turkey was a symbol of abundance and fertility to the Native American people of the region the pilgrims settled, so this symbol is fitting whether it was at the pilgrim’s Thanksgiving or not. 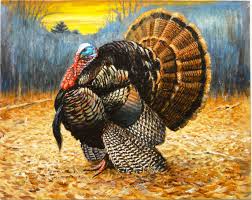 Also called the “horn of plenty,” a cornucopia is a horn-shaped container filled with fruits of the harvest. Being that Thanksgiving originated from Native American harvest celebrations, it’s no surprise this Greek symbol of the harvest found its way into Thanksgiving symbols. Traditionally, the cornucopia was a goat’s horn given to the God Zeus as a gift.

We often see dried corn husks or colorful dried corn cobs around Thanksgiving and the autumn season. This is because corn was one of the primary foods of Native Americans. It was also one of the crops they taught the pilgrim’s to grow which saved them from starvation. Corn is thought to be a symbol of agriculture and a healthy harvest.

This is kind of obvious, but the black hats with buckles represent the Pilgrims. Sometimes we see actual tiny pilgrims or Indians as well. These symbols sprang from the story of what many consider to be the “first Thanksgiving,” despite the fact this is actually a Thanksgiving myth. Regards, all the above became symbols of Thanksgiving to represent the friendship and appreciation we show for others– no matter how different we may be.

There is actually, again, no proof pumpkins or even pumpkin pie was present at the first Thanksgivings. Pumpkins, however, were available in the area, and the local Native Americans considered them a symbol of the life giving sun and man’s personal power. Pumpkin is also an autumn harvested vegetable, which could explain it’s strong association with the harvest and Thanksgiving.

Another decoration we commonly see around Thanksgiving, this symbol has a pretty cut and dry meaning, autumn and fall. It’s suggested this symbol has more to do with pretty presentation than actual symbolism.

Did we miss any Thanksgiving symbols you were curious about? Let us know!

Scroll back to top wpDiscuz