Certain things just scream summer, so much so they’re almost essential to summer. Do you know where they came from? Is a hot dog really made of dogs? Who froze Popsicles? Were smores an accident or an act of genius? Prepare to be answered. The history of some of your favorite foods is about to be revealed to fill your brain with more useless trivia for camp ground conversation and late night silence shattering than you ever really wanted. So much so it requires more than one article, today’s subject… 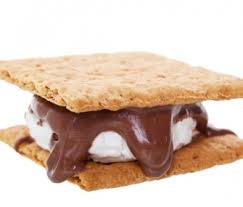 No camping trip is complete with out America’s finger goo-ing, sweet-toothed, chocolate-lipped treat, the smore. In fact, the Smore has become such a beloved dessert that it actually has it’s own (although not national recognized) holiday, August 10th during prime camping season.

A verified history. It seems despite it’s popularity the actual exact date and time that some one decided to place marsh mellow atop chocolate and sandwich it between graham cracker is unknown, but here’s what we do know.

The very first printed record of the recipe was in a 1927 in a girl scout’s manual entitled, “Tramping and Trailing with the Girl Scouts”. It’ said the smores original name was actually “some more”, awarded because of the constant requests for more and later shortened to simply “s’more”. It’s suggested that this abbreviation was perhaps born from sticky mouthed individuals unable to properly say, “some more, please” or that smores are just so delicious, you don’t have time to say the whole phrase. Because the three primary and necessary ingredients for an unaltered smores recipe are: graham crackers, marsh mallows and chocolate bars, and these items became popular and readily available to the public in the 19th century, it’s safe to bet the recipe originated in that time period, and we’ll simply credit it’s creation to happy camper’s everywhere.

Don’t fret we’ll offer you some history yet…

Breaking it down: The history of the smores building blocks:

The marsh mellow far beats the smore in an age contest being over 4,000 years old. It was first discovered Egypt by squeezing a mallow plant and was reserved only for gods and royalty. However, it didn’t receive it’s more common appearance until the 1800’s. French candy makers whipped the plant extract into egg whites and sugar to make not treats, but medicine. Marshmallows originally were used to treat sore throats, suppress coughs, and help heal minor cuts and burns, and became so popular a quicker production method had to be found. Unfortunately, this method also put an end to the use of actual mallow in in marshmallows resulting in the modern recipe of corn syrup, corn starch, sugar, and gelatin. Marshmallows have no medical use, but Americans still purchase more than 95 million pounds per year.

We can put a name and a date on this one. Sylvester Graham in 1829, and clearly the cookie is named after it’s inventor. Graham created the cookie as part of a vegetarian diet as a high fiber, slightly-sweet cracker made with whole, unrefined wheat flour. He is also credited with having the first bread brand to be enjoyed world wide, but Graham was not worldly loved. He rallied against tobacco, meat, and alcohol and was regularly assaulted in the street. Not a kind way to treat someone who played such a big part in the smores birth.

The most extensively researched ingredient of the smore, the chocolate bar, has a rich history dating back to it’s sister ingredient the marshmallow’s time more than 4,000 years ago in 2000 B.C. Chocolate originated in the Amazon and has been used all-throughout history by almost every culture ever known at some point in time, it was even once a currency in Spain. It wasn’t, however, forged into an actual chocolate bar until 1847, when Joseph Fry created a paste from chocolate that could be pressed into a mold. Chocolate DOES have medical uses. Harvard’s school of medical health claims that a few pieces of chocolate a month can actually lengthen your life! Chocolate is also high in antioxidants and essential minerals such as iron and copper.

But you know the best part of the smore is not it’s history, but it’s taste. I leave you with no other closing than the original 1927 recipe for smores compliment’s of the girl scouts.

8 sticks (for toasting the marshmallows)

8 bars plain chocolate (any of the good plain brands, broken in two)

Toast two marshmallows over the coals to a crisp gooey state and then put them inside a graham cracker and chocolate bar sandwich. The heat of the marshmallow between the halves of chocolate bar will melt the chocolate a bit. Though it tastes like “some more” one is really enough. “