What are the different styles of toddler discipline? 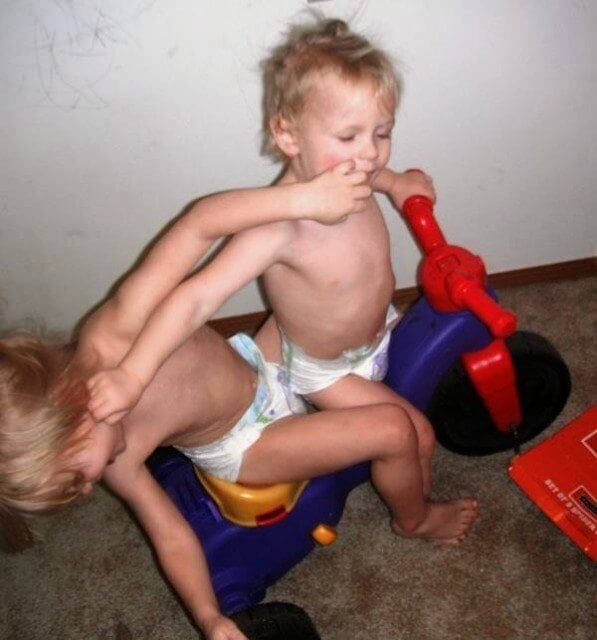 This toddler discipline technique focuses on encouragement which may seem the complete opposite of what you want to do with an ornery toddler who is misbehaving, but a little more explanation might put this style on your list. Positive discipline works on the premise that a child that feels encouraged, empowered, and needed doesn’t misbehave in the first place. Positive disciplinarians use methods such as positive time-outs, family meetings, natural consequences (such as I spill my milk on purpose so I don’t have any), and work together with their child to solve behavioral problems. To better explain, in the spilled milk story you may say, “Oh no, we have a problem; now your milk is on the floor. What can we do about this?” and allow your toddler to suggest a solution, such as cleaning it up which makes your toddler feel needed and in control, but the natural consequence of a now empty cup deters the repeat performance.

Another nice-guy disciplinary method, gentle discipline, focuses on diffusing, derailing, and preventing bad behavior. The idea of gentle discipline is to eliminate as many opportunities for bad behavior as possible, and then distract rather than punish when they do occur. For example, you may remove no-no items and warn of changes. For example, you take your child to the store, you avoid the candy isle to avoid a tantrum over said candy, but your child still spies with his little eye a play car, an expensive play car. You could zoom-zoom away making funny car sounds to distract from the desire which is fixing to cause a fit. Later you warn we are checking out and we’ll be going home soon, so your child knows what’s going on and feels more comfortable. Gentle discipline uses techniques such as cool-off time outs and anger control for both parent and child, distraction, validation, and a humorous approach to parenting.

Emotional coaching classifies as a style of discipline but is more an entire style of parenting. This approach focuses on the emotional “why” of bad behavior using methods such as empathetic listening, feeling expression, and identification and methods of self soothing. A parent using this style may sit their child down and talk about why they threw a toy and help their child work through those feelings as well as offer suggestions on a positive vent for those emotions. Emotional coaching is suggested to strengthen the bond between child and parent.

Boundary-based discipline follows the belief that a child not only needs but craves boundaries and rules and in turn needs consequences to those boundaries and rules making it the first of the methods that could make you the bad guy. Those that use boundary-based discipline explore choices with their children, use cool-down time outs for their toddler, and combine natural and logical consequence options. A toddler under the boundary-based discipline rule will be presented with options when he or she misbehaves and presented with consequences if compliance is not carried through. For example, your toddler throws a fork at you. The boundary is then set, “We do not throw forks; you can eat with your fork or I can put it away.” If the toddler then threw the fork again, it would be taken away, and the behavior would be deterred by the natural consequence of no fork. A logical consequence such as no dessert or some other meal time related down-side may also be applied.

A slightly more authoritative version of boundary based discipline, behavior modification enacts positive and negative reinforcement. Boundaries and rules are set, but less natural and logical punishments are used. For example, you tell your toddler that we do not climb on the back of the couch, when he or she does so there is a set number of warnings, and then a consequence such as time out or loss of a toy. Some parents may also opt for spanking; though it should be noted a child should never be hit in anger and that there is a big difference between discipline and abuse. Be sure you know where those lines are. On the other side of the cookie, a toddler that often crawls on the couch may be rewarded if he or she doesn’t for a set amount of time using a reward chart or another form of positive reinforcement. Behavior modification rarely offers choice to children, the parents are the boss, they are in control and their word is absolute.

Can I combine toddler discipline techniques?

Absolutely! You and your child may not fit into any style perfectly. The important thing is that you are consistent with whatever method of toddler discipline you choose and that it works. Many of the disciplinary styles combine very well.

What cues might indicate my toddler may behave better under one toddler discipline technique or another?

No one knows your toddler better than you do; in the past year or two, it’s unquestionable you’ve stumbled into likely each disciplinary style at least once. Sit down and think, “What worked the best?” If your child straightens up right quick with a stern word and no wiggle room, behavior modification may be for you. If he or she rebels dramatically to any stern rules, you may look at one of the more flexible paths such as emotional coaching or gentle discipline.

What happens if I pick a toddler discipline technique and it doesn’t work?

It’s a good idea to try trial and error for awhile. Pay close attention and see what seems to show the most significant change and then decide on that method. Afterward, you may find tweaking, adjustment, and adaption are necessary, and you may not. After your trial and error period, you want to remain pretty solid on your methods. Be patient, be consistent, and remember there is no right or wrong way to parent.