I approached my living room one morning after brushing my teeth and saw from a distance my children were up to no good. There was plant dirt everywhere. I watched as the oldest of the troublesome twosome of the time sprinkled a hand full of dirt across his brother’s head and then promptly hopped from the couch to run to me and announce, “Oh no mom! Rafe (his brother) no no! Plants.” At two years old this was the first instance of toddler lying my child had displayed. It was perfectly clear to me that both boys had made the mess, but my child had not only tried to create evidence otherwise, but he’d attempted to be the good boy tattling on the wrong doing as well. Suffice to say his performance wasn’t successful this time, but it certainly was not his last act.

Why do toddlers lie? 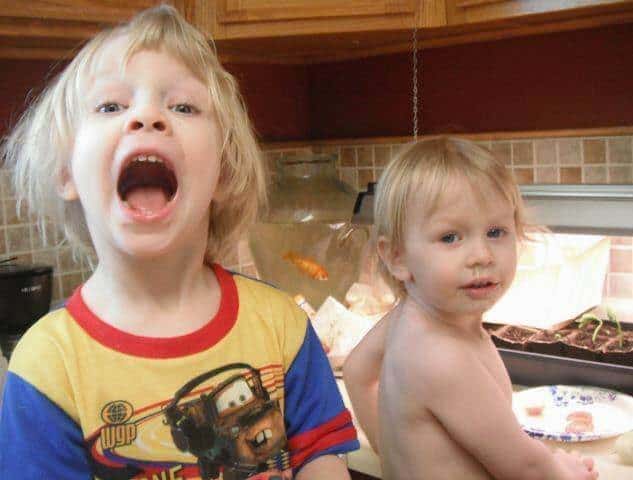 You’ll be happy to know a toddler lying has nothing to do with deception. In the story above, for example, my toddler wasn’t necessarily attempting to fool me per say. There are a couple of possible explanations and none of them indicate a dishonest, bad little boy.

An active imagination:
One of the most common causes of toddler lying is simply that rich imagination they posses. At a young age children have difficulty discerning what actually happens from what they imagined happened. Recently my toddler told me that the twinkle, twinkle stars spilled his juice, half in song even. Clearly a star didn’t come out of the sky and tip his cup, but in his mind one did apparently.

Wishful thinking:
On top of an active fantasy life, toddlers also enjoy praise. Even being contrary and ornery my boys love being told they do well. Many toddlers will create a fantasy to stay in your good graces, and again, due to a loose ability to tell truth from fiction they believe in their own lie. My toddler telling me his brother dusted our living room with plant habitat was his attempt to stay the good boy and please me. He knew he did a no-no and wished he didn’t follow that ever present toddler impulse to do so, so in his mind he didn’t do so his brother did.

A less than perfect memory:
Lastly, children that young just don’t have much of a memory. If you ask them to recall what they’ve done they may not remember everything and use that imagination to fill in the blanks leading to a full-fledged fib.

What can I do to encourage honesty in my toddler?

Be sure to praise the truth. As a child I remember I always got in far more trouble for lying than I would have just for whatever it was I had done. Don’t set the impression that the truth excuses a wrong action, or punish the lie at this age, but do commend the truth. A verbal thank-you goes a long way. Once your child gets older and understands right from wrong, truth from lies, you can start penalizing lying.

You can also encourage honesty by preventing toddler lying before it happens. Avoid putting your toddler in a position to lie. For example, in my dirty living room story asking my toddler what happened would have been inviting him to lie. Instead by saying, “You and your brother played in the plant dirt, and that’s a no-no. Time for time out” I wouldn’t be placing him in a position to try and make up what happened, and I’m also helping him recall what actually did happen. This can help children begin to differentiate between fact and fiction as well as build memory and sequence of events.

If your child does lie or fib listen at first, as you are being given a window into your child’s imagination and inner mind, but then be sure they understand what the truth is. This way you get to learn from the story and encourage imagination and honest all at the same time.