Ah, Jagermeister. Commonly known as Jager, this syrup-like spirit is an acquired taste. Popularized in the US by the Jager-bomb, a mixture of the Jagermeister and the energy drink Rockstar, the majority of drinkers either love Jagermeister with cult follower-like devotion or hate it with a passion–but does the licorice-anise flavored 70-proof liquor offer medicinal uses? 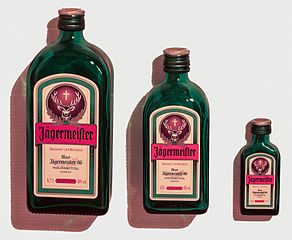 What’s in Jagermeister, and how is it made?

Sadly, Jagermeister’s ingredient list is actually top secret. Despite the original recipe dating back to 1934, only 16 of the 56 herbs, spices, and berries that give the drink its flavor could be verified.

Known ingredients in Jagermeister include:

These and forty other mystery herbs, berries, or spices are measured, ground, combined, and then reduced to extracts by being seeped in cold water and alcohol for a few days. The result is then strained and stored away in oak barrels for a minimum of one year.

After that, the liquid is strained again, then mixed with caramel, liquid sugar (beet and cane), alcohol (often suggested to be rum), and water. The resulting liquid is then filtered yet again before being placed in that iconic green bottle.

Contrary to popular myth, Jagermeister does not contain the blood of any species. Secret recipe or not, blood would not allow this brewing method to work properly. Many fans have also suggested the drink may contain wormwood, one of the herbs from which absinthe is made. There is no evidence to support or disprove this suggestion. Those who have tried wormwood are aware that the flavor would lend nicely to Jagermeister being similar to licorice.

However, in the US, thujone, the chemical present in wormwood suggested in the past to cause hallucinations, is strictly regulated by the FDA. Even if Jagermeister does contain wormwood, it would have to be strictly for flavor to be sold in the US. It should also be noted that suggestions that thujone causes hallucinations or a “high” are inaccurate anyway.

The history of Jagermeister:

When trying to determine whether Jagermeister has medicinal uses, the next thing you have to consider is its history. The company itself was founded in 1878 in Wolfenbüttel, Germany, by Wilhelm Mast.

His son, Curt Mast, took over the company in 1934 and created the recipe for Jager. Jagermeister hit the German market in 1935. Coincidentally, it was indeed marketed as medicinal liquor boasted as a digestive aid and cough suppressant. It didn’t become popular simply to get drunk until 1970 when other countries began to import it. Even today, Jagermeister is still used in some German homes for medicinal purposes.

But does Jager really aid in digestion and suppress a cough?

The fact is something being marketed to do something doesn’t mean it does it. Even so, the mere sixteen verified ingredients do have medicinal uses.

Cinnamon bark has been shown to reduce gas, prevent diarrhea, and stimulate appetite.
Star Anise has been shown to improve liver health as well as acts as an anti-viral.
Cloves have been shown to reduce fevers, act as an anti-inflammatory, and prevent intestinal cancer.
Ginger Root reduces nausea, inflammation, and has been shown to cure mild indigestion.
Saffron has been shown to prevent cancer, vascular and visual disorders, as well as reduce symptoms of depression and ADD.
Coriander prevents gas, is an antispasmodic and stomachic (an herb that improves stomach muscle health).
Bitter Orange Skin is suggested (studies are limited) to be an anti-inflammatory, antispasmodic, and relaxant. It may also be anti-fungal and antibacterial.
Chamomile Flowers reduce gas, cramping, and overall indigestion while aiding in relaxation.
Licorice Root may suppress cough and cure digestive ailments, including peptic ulcers. However, studies have had mixed results.
Lavender is used to treat insomnia, stress, and anxiety. It’s also an anti-inflammatory and anti-fungal.
Rose Hips promote healthy tissue in the stomach lining as well as prevent diarrhea.
Poppy Seed has long been known to improve digestion and reduce cough.
Juniper Berries are a diuretic, but also have been shown to help treat bronchitis.
Ginseng increases immune system strength, has been proven to reduce the duration of colds, and helps prevent cancer.
Red Sandalwood is suggested to reduce anxiety and increase alertness.
Blueberries are extremely high in antioxidants and fiber, which aids in healthy digestion.

Even this small sampling of known ingredients in Jagermeister suggest it may have medicinal uses, particularly to treat cough and digestive upset. However, note, that as a full list of ingredients isn’t available, Jagermeister may pose an allergy risk. That could explain why some can’t tolerate drinking the unique liquor, whether they like the taste or not.