While your baby’s gender is determined from conception by the presence of an X or Y chromosome in the winning sperm, gender changes don’t begin physically until around the 9th week of pregnancy. Gender development doesn’t begin at all until 6 weeks. This leaves many parents-to-be wondering, well, when can you tell the gender of a baby via ultrasound? What does a boy or girl look like on an ultrasound? To answer that, it’s easiest to look at the gender development process.

We all start the same

Between 9 and 11 weeks via ultrasound, both genders have a “nub” and “bulge” visually like most would envision on a male baby. These structures are composed of three primary parts, the genital tuber, labioscrotal folds, and urogenital folds.

Below is an illustration of how these structures change from 6 weeks (complete with tail) to 8 weeks just before gender differentiation begins. The visual at this point is the same for a male or female child.

With a male baby, between weeks 9 and 11 weeks, the genital tuber becomes the glans of the penis, the urogenital folds become the shaft, the labioscrotal folds become the scrotum, and the anus is the anus still. You can see a visual of this below. Your baby’s testicles remain in the abdomen until roughly between week 28 and 32. The foreskin is formed in week 12. By week 13 to 16, a very clear difference can be seen on ultrasound, but keep in mind, at 12 to 13 weeks, the average baby is only the length of 2 pennies placed side by side, and the genital area is the size of a pinhead. A much better visual can be obtained at 20 weeks when gender changes are more definitely complete. 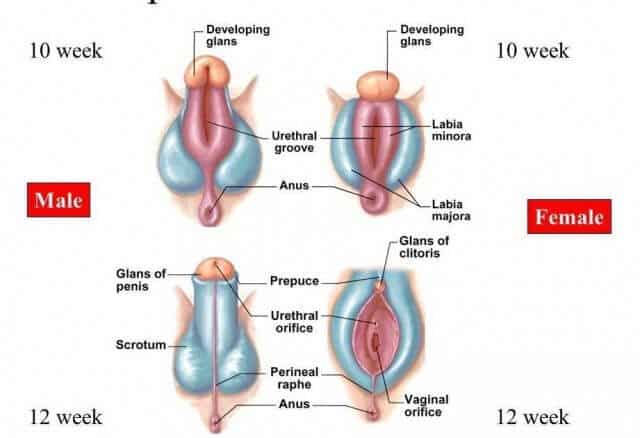 Female reproductive parts begin from the same embryonic bodies as male reproductive parts. The urogenital folds become the Labia minora (the inner smaller lips of the vulva), the labioscrotal folds become the Labio majora (large lips of the vulva), and the genital tuber becomes the clitoris. Ovaries are fully formed by week 12 and contain upwards of six million eggs. This number decreases to around 1 million by the time your baby is to born and reduces even further to about 400 by puberty.

A boy ultrasound is most typically described as looking like a turtle or snail, but as the beginning of this page suggests, accurate dating is very important as both genders have this shape early on. A clear boy ultrasound at 16 weeks is shown below. 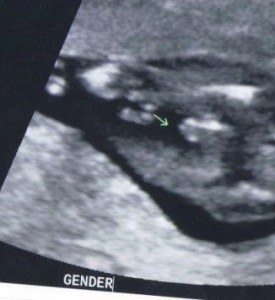 A girl ultrasound should have three distinct lines (the outline of a vulva). The absence of a protrusion (the turtle head on a boy ultrasound) doesn’t necessarily mean a baby is female. It could just be a bad angle. Note the lines may not be the same length. The image below is considered a very clear girl ultrasound picture at 17 weeks. 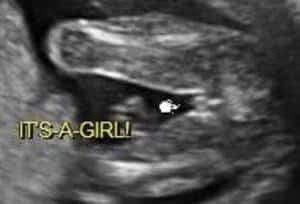 Wondering if ultrasounds can be wrong? Read on. You may also enjoy our baby gender determination quiz based on the science of gender swaying.