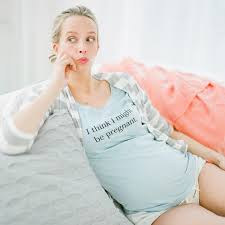 First, a quick crash course in the pre-pregnancy phase of things…

Every month, there is a cycle of hormones that prepare your uterus for possible pregnancy, develop and release an egg for possible fertilization, and either maintain pregnancy or prompt the shedding of your uterine lining so the process can start all over.  The majority of women ovulate, or drop said egg, mid-cycle. So if your cycle is, say, 28 days, with cycle day (CD) 1 being the first day of bleeding, ovulation would be around CD14. Pregnancy is only possible when an egg is present in the Fallopian tube, and an egg on average only survives about 24 hours after ovulation. So, the first question you should ask yourself when questioning when do pregnancy symptoms start is if pregnancy is even possible.

For example, intercourse during or just before your period leaves a very slim chance of pregnancy, because sperm can only survive on average about 5 days, the egg isn’t usually around until mid-cycle and is long gone by late cycle. You can read more about calculating your chances of pregnancy here.

Now, assuming sperm and egg met within 48 hours of ovulation, what happens next…

Once the egg is fertilized it has to travel to your uterus and implant. You will not have pregnancy symptoms before implantation because, well, you aren’t pregnant. Implantation takes an absolute minimum of 6 days. The average is 8 to 10 days. After implantation hormone levels have to start to accumulate. At minimum again, a pregnancy test is possible 48 hours after implantation, and that’s on an early pregnancy test that detects exceptionally low levels, levels unlikely to cause symptoms. You can read more about pregnancy test timing here.

Back to hypotheticals again, if you had that average woman’s 28-day cycle with CD14 ovulation, this means at minimum pregnancy symptoms aren’t even possible until CD22. (6 days for implantation, 2-day hormone build= ovulation +8 or in conception forum speak DPO 8 (days past ovulation) a more likely timeline says you’d be looking at DPO 12 or CD26, coincidentally right about when your period would be due, and that’s just for hormone levels to be present and detectable for an early result pregnancy test, seeing pregnancy symptoms would likely take even longer. So, if you’re sitting here reading this 5 days after unprotected sex thinking you have pregnancy symptoms, the timeline says, “nope.”

Too lazy to read all that? The quick version is it is actually anatomically impossible to have pregnancy symptoms any sooner than 8 days after ovulation (or unprotected sex if you don’t know when ovulation occurred).

Alright, so assuming you are 8 days past ovulation, statistically speaking, when do pregnancy symptoms start?

Surprisingly, there are very few actual studies on this subject. The only one to be found was conducted in 2002 and published in the Journal of Clinical Epidemiology. If you can’t find a version online and would like to read that bad chicken, I’ve uploaded it to Life with Gremlins, and you can view it here. This study included 221 women of which 136 had successful pregnancies, only symptoms that persisted at least 3 consecutive days were counted as verified to rule out fluke tummy aches and the like.

-9% of non-pregnant women reported “pregnancy symptoms.” This rate increased in women who got a late period and suggested many women mistake PMS for pregnancy (see my note on Progesterone).

-None of the women who were actually pregnant reported symptoms before CD27.

-59% of pregnancy symptoms began between CD29 and 41. The average was CD36 (when half the women had symptoms) or about 1 week after a missed period for most.

-When data was counted using ovulation date, rather than the last menstrual period and counting cycle days, the average date for pregnancy symptoms to start was 20 days past ovulation.

-Smoking and/or marijuana use delayed the onset of symptoms.

-Women who had previously been pregnant showed symptoms slightly earlier (but never earlier than CD27).

-Nausea was the most common symptom.

Wrapping it all up, when do pregnancy symptoms start?