Ovulation—it’s like the holy grail of conception. You can’t get pregnant if you can’t figure out if and when it happens to you, sort of. I mean, you can actually take a cheater’s approach and just have sex every other day or so around mid-cycle. That’s when ovulation occurs for most. So, you’d think all you have to do is take your cycle length and cut it in half. Bam—estimated ovulation date. The problem there is, while easier, this approach is sort of shooting in the dark—but with sperm—and while that can be fun it can make conceiving take a while, because not all women ovulate mid-cycle. In fact, some women don’t ovulate at all. So, if getting pregnant quickly is your aim, when do you ovulate should be your first question. 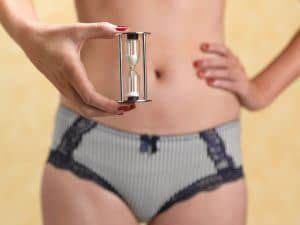 Chances are if the Google Gods led you to this page, you have at least a fuzzy idea what ovulation is, but for clarifications sake, ovulation is the point during your menstrual cycle when your ovary drops a fertile egg. You can only become pregnant in those 24 hours or so after ovulation while that fertile egg is in your fallopian tube. If sperm isn’t present in that time frame, the egg is shed along with your uterine lining during your period.

When do you ovulate?

As mentioned above, most women ovulate around mid-cycle. Dividing your average cycle length by two is a fair way to get a rough estimate of when you ovulate.

Example/ If you have a 26-cycle, you probably ovulate around cycle day (CD) 13 with day one being the first day of active bleeding during your menstrual cycle.

You can narrow this down to an average for you personally (I, for example, run a 26-day cycle, but ovulate around CD 11) by tracking your ovulation symptoms, utilizing basal body temperature (BBT) tracking, and ovulation predictor kits (OPKs). When trying to pinpoint ovulation, I then recommend the following tools for your conception toolkit:

-A good BBT thermometer. A regular thermometer will not give an accurate temperature shift. BBT can be used to confirm ovulation. I’ll talk a bit more about that here in a moment. I also have a full, more in-depth guide on how to track BBT here.

-An easy to use tracking app. I use FertilityFriend, but there are many combination BBT, signs of ovulation, and period trackers out there. You can also keep track on paper, but most find an app more convenient. For beginners apps can also prove easier, because they often will estimate ovulation for you based on the data you enter.

-A supply of inexpensive ovulation predictor kits. OPKs can be used to predict ovulation shortly before it happens. We will also cover that how in just a moment.

Ovulation symptoms: What are the signs of ovulation?

To understand ovulation symptoms and when and why they happen, it’s best to have a rough understanding of the hormones that drive your menstrual cycle. It’s these hormones that are behind most signs of ovulation.

At the start of your cycle (the first day of bleeding) your sex hormones (estrogen and progesterone) are both low. This signals the release of Follicle Stimulating Hormone (FSH). FSH is what prompts a follicle in your ovary to develop an egg. The development of this egg stimulates estrogen production which is the dominate hormone before ovulation in the follicular phase of your cycle. High estrogen then triggers Luteinizing Hormone (LH) to be produced. LH is the hormone that triggers ovulation. Ovulation stimulates the production of Progesterone, which dominates the second half of your cycle, the luteal phase. Progesterone maintains the uterine lining, and will drop if the released egg isn’t fertilized or continue to rise if it is.

Keeping the above cycle in mind, those hormones cause different cervical discharge changes. At the beginning of your cycle as estrogen is low, your discharge is probably non-existent to light, dry or sticky and acidic. This discharge is not very sperm friendly, but it does deter bacteria growth to protect your vagina from infection.

Following ovulation as estrogen decreases and progesterone rises discharge often goes back to watery, followed by sticky or dry, and then bleeding if you don’t become pregnant. Some women also see an increase in discharge just before their period, and some women see watery discharge all cycle. It’s the stretchy mucus you’re watching for. On another note, thick yellow discharge at the end of your cycle can also sometimes be an early sign of pregnancy.

Cervical position is a harder sign of ovulation to track. Your cervix actually moves up and down during the day, but if you check it at the same time every day, you may also notice a pattern within your cycle. Like your discharge, your cervix is affected by your hormones. During periods of low estrogen the cervix remains low, long, hard, and closed. You’ll probably be able to easily reach it, and it will feel sort of like the tip of your nose. As estrogen rises, the cervix does too, becoming shorter, softer, and opening slightly (note that those with previous children often always have a slightly open cervix). During ovulation your cervix will be hard to reach and feel more like your lips. Many women remember the signs of ovulation in regards to cervical position and state with the abbreviation SHOW: soft, high, open, wet (mucus).

Ovulation predictor kits are, like a pregnancy test, a stick that you urinate on. They detect LH which surges about 24 to 48 hours before ovulation. It’s important to note that unlike a pregnancy test, an ovulation test is only positive if the test line is darker than the control line. LH is present in your system outside of ovulation, so there will almost always be two lines. If you have trouble reading the cheaper line tests, there are more obvious (and expensive) smiley-face tests available. You don’t have to use these tests all cycle, just during your ovulation window. Until you narrow down your window more, I recommend starting at about CD 8. You can stop after ovulation. We also have a complete guide on using OPKs.

Ovulation pain is not something everyone gets. In fact, only about 1 in 5 women experience pain at ovulation. Many describe ovulation pain as a twitching, pinching, or pressure in their lower pelvis closer to the right or left hip (this is where your ovaries are located). Ovulation usually occurs from just one side, and may not occur on the same side every month. If pain is felt on one side near your ovary near when ovulation should occur, you can consider it a sign that ovulation may be near or occurring caused by the growing follicle or the rupture of the follicle to release an egg.

However, keep in mind that cramping can often be mistaken for ovulation pain. As a general rule if it’s not lining up with other signs of ovulation or occurs on both sides, it probably is not ovulation pain.

Like ovulation pain, not all women experience ovulation spotting. Sometimes spotting is caused by the rupture of a follicle to release an egg. To put this in perspective, the average follicle is a mere 18 to 24 mm—or between the size of a dime and a nickle. Ovulation spotting of this type is very light.

Alternately, some women also get a slight hormone dip at ovulation, which can also cause light spotting. In those women, a temperature dip would also be visible on a BBT chart. This bleeding would still not be heavy or prolonged.

You can read a full in-depth guide on tracking your BBT here, but briefly, your BBT is your temperature taken with a BBT thermometer upon first waking in the morning, before doing anything else. The rise of progesterone after ovulation will cause this temperature to rise slightly allowing you to confirm that ovulation has occurred and so build a more concrete average ovulation pattern. This rise is sometimes very small and a clear shift is hard to see. For other women it’s more pronounced and may even be visible using a regular thermometer.

Other signs of ovulation:

Finally, individual women may notice different signs of ovulation. Some women notice they crave certain foods or are more interested in sex. To pick up on signs like these you need to track ovulation for some time and really pay attention to your body. You’ll likely be more aware of post-ovulation symptoms as progesterone is the culprit behind PMS. Things like feeling hot, bloating, nausea, and back pain are all caused by progesterone which peaks after ovulation. This leads me to an important note. It is very, very, and a few more very’s common to mistake PMS symptoms for pregnancy symptoms. You will not get pregnancy symptoms before implantation. Period. You can explore the pregnancy symptoms timeline in more depth here as that is an entirely different topic.

We hope that our guide on when do you ovulate has proved helpful in your quest for belly fruit, and as always, welcome your comments, questions, and suggestions.

You might also find useful:
Conception Lingo
When to Take a Pregnancy Test for Accurate Results
Am I pregnant? Calculating Your Chances of Pregnancy