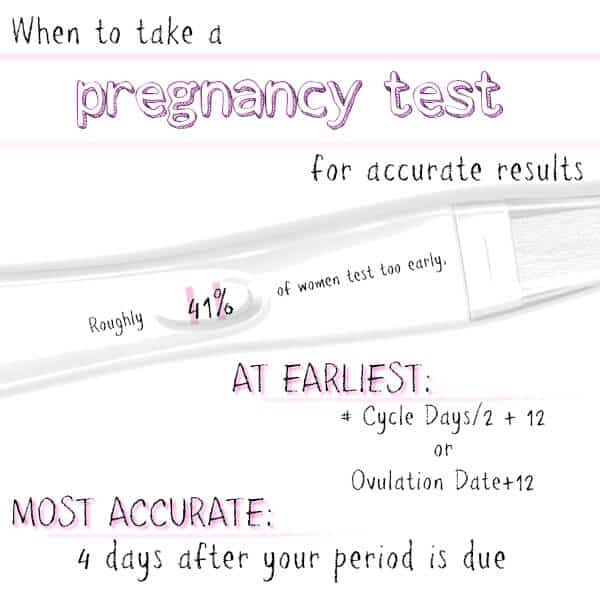 So, how do you know when to take a pregnancy test?

While many urine pregnancy tests boast they can predict pregnancy 6 days before a missed period, this is arguably inaccurate.

The most sensitive over-the-counter test (First Response Early Result) has been shown to pick up levels of 5.5 mIU/mL. Other tests, such as Clearblue, have a much higher threshold of closer to 22 mIU/mL. This would make day 3 to 5 when a positive test would be possible.

So, let’s assume a few scenarios with a 28-day cycle placing ovulation and sex at mid-cycle or cycle day (CD) 14.

Fastest timeline: (DPO 9) (which is quite rare) Implantation occurs on CD 20. You might be able to get a faint positive on CD 23 or 5 days before a missed period.

More likely timeline (DPO 12): Implantation occurs on CD 23. A test might show faintly positive on CD 26 or 2 days before a missed period.

But at the slow end of the spectrum (DPO 14): Implantation occurs on CD 26. A positive is possible the day after a missed period.

Remember, these examples would change with cycle length. For instance, on a 26-day cycle with ovulation at mid-cycle (CD 13), a slower 12-day implantation lands on CD 25, so a test wouldn’t likely be positive until 2 days after a missed period.

You can use this formula to determine when to take a pregnancy test at the earliest. Add about 2 more days for a safer bet:

Keep in mind that the sensitivity of the test you use and the time it takes for implantation can vary greatly, and pregnancy tests can be expensive. Early testing can also lead to concerns over false positives (or negatives).

To support this, over at Fertility Friend, they did a survey of 93,184 charts where women were tracking their periods, ovulation, and/or temperatures and found the following statistics:

17 percent of women received a false negative as a result of testing too early, but an impressive 40.7 percent test too early overall, with most testing 10 days past ovulation (DPO) or roughly 4 days before a missed period. The average DPO for a positive pregnancy test is 13.6 days, a whopping half a day before a missed period for most ladies. As you can see from the chart above, even a few days make a huge difference.

This data also correlates with a 2014 retroactive look at pregnancy test accuracy studies published in the National Library of Medicine from 1960 to 2013. hCG levels were found not to exceed 10 mIU/ml (the commonly suggested sensitivity of many home tests) until 10 to 12 days after ovulation or 2 to 4 days before a missed period.

Further, the study also found that the majority of home tests were not actually able to detect levels this low, and when they were, home-users often misread the tests (squinters). 25 mIU/ml was a more common sensitivity level. A level not reached until 12 to 14 days after ovulation (around the time of a missed period.) The suggestion based on this data was that a test should not be taken earlier than 4 days before a missed period.

This likewise confirms the data shown above for hCG levels by days after implantation that suggested day 3 to 5 would be the earliest time frame for a positive test depending on brand. By ovulation, using the 8- to 10-day average, this would be day 11 to 15, again around the time of a missed period.

Given all of this, the day of your missed period is a fairly safe bet, but about 4 days after is more ideal, as 100 percent of women who were indeed pregnant got a positive test at that point over at Fertility Friend and data on hCG rises in pregnancy against test sensitivity would support a highly accurate result as well.

All that being said, when to take a pregnancy test, what’s the answer?

If you enjoyed our guide on when to take a pregnancy test, you may also find helpful:
Calculating Your Chances of Pregnancy
False Pregnancy Test Results: How Common Are They?
Missed Period, Negative Test: What Gives?
Early Signs of Pregnancy Quiz
Period While Pregnant